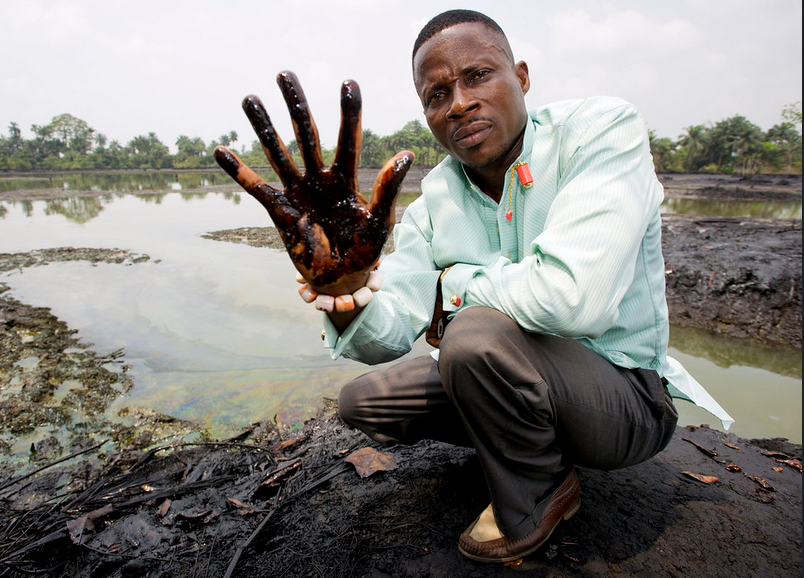 Next month, we will know if a decades-long search for justice will be successful.

In March, a Dutch court will rule on the case against Shell brought by Esther’s Kiobel and other widows of the Ogoni 9.

It was way back in November 1995, that Esther’s husband was murdered along with Ken Saro-Wiwa for the campaign by the Ogoni for environmental justice against Shell.

It has taken twenty-seven long years for the widows to hopefully see the UK-based (formerly Dutch) corporation held to account. And all the while the evidence of the devastating effects of Shell’s pollution in the region has mounted.

Two years ago, Osai Ojigho, from Amnesty International Nigeria, said: “The discovery of oil in Ogoniland has brought huge suffering for its people. Over many years we have documented how Shell has failed to clean up contamination from spills and it’s a scandal that this has not yet happened.”

Ojigho added: “The pollution is leading to serious human rights impacts – on people’s health and ability to access food and clean water. Shell must not get away with this – we will continue to fight until every last trace of oil is removed from Ogoniland.”

It is also worth remembering how Shell colluded with the then Nigerian military and armed police which murdered thousands of Nigerians.

It is no wonder that in Nigeria, as well as elsewhere, oil has repeatedly been labelled the curse of the black gold.

Beyond pollution and human rights violations, the climate impacts and economic risks of new oil, gas, and coal projects now mean that no new fossil fuel extraction projects should be approved – in Nigeria or anywhere.

We urgently need a just energy transition instead where existing projects are phased out with support for impacted workers and communities. The costs of this transition should not and cannot be borne equally: wealthy countries in the Global North most responsible for historic and current emissions must move first and fastest to phase out their fossil fuel production and pay their fair share for others to do the same.

However, the fossil fuel industry, wealthy nations, and oil-producing governments are set on continuing to use public money to prop up new drilling instead. Writing in the journal Foreign Affairs last year Yemi Osinbajo, the Vice President of Nigeria, sounded a warning about the commitment from some rich nations to end their international public finance for fossil fuels from their trade and development finance institutions.

Osinbajo was among other voices, many industry-linked, who have made similar arguments in the lead up to the COP26 Glasgow statement by 35 countries and four institutions promising to end direct international public finance for fossil fuels by the end of 2022 and prioritize clean energy finance instead.

Osinbajo called for “multiple pathways to net-zero emissions”, including the use of oil and gas for African countries, adding: “For countries such as my own, Nigeria, which is rich in natural resources but still energy poor, the transition must not come at the expense of affordable and reliable energy for people, cities, and industry.”

These arguments conveniently ignore that the vast majority of wealthy countries’ international fossil fuel finance that is being phased out actually flows to other wealthier countries. Of the top 20 recipients of international public finance for fossil fuels 2018-2020, only one was low-income, six were lower-middle income, and the remainder were upper or middle income.

But that is just the start of what these calls to continue international public finance for fossil fuels get wrong. A comprehensive counter argument to Osinbajo’s piece was published this month in Foreign Affairs, by one of Africa’s most influential voices, Nnimmo Bassey, the Director of the Health of Mother Earth Foundation, an ecological think tank in Nigeria, and a member of the Steering Committee of Oilwatch International and Anabela Lemos, Director and founding member of Justiça Ambiental, an environmental advocacy group in Mozambique.

Bassey is one of the continent’s most vocal critics of the oil industry. As he has pointed out in the past: “The colour of oil in much of the world runs red.”

Bassey and Lemos state that “far from generating prosperity and stability in sub-Saharan Africa, investments in fossil fuels cause real harm,” noting “Decades of fossil fuel development have failed to deliver energy to much of the continent and have built economic models dependent on extraction that have deepened inequality, caused environmental damage, stoked corruption, and encouraged political repression.”

Continued financing of gas expansion in Africa displaces renewables, delays Africa’s energy transition, and makes it harder for countries to decarbonize and escape a harmful extractive economic model https://t.co/62WmoTQFKx by @NnimmoB and Anabela Lemos of @JA4change

Excellent piece on Africa's Fossil Fuel Trap by Nnimmo Bassey @NnimmoB and Anabela Lemos @JA4change – voices we need to hear more of in the run up to COP27! https://t.co/eoknOjRl3v

Bassey and Lemos repeated the line of the world’s leading scientists and the International Energy Agency that “Pouring more money into fossil fuels will not only perpetuate this dynamic but also delay the necessary shift to renewables.”

They repeated a finding from the Sky’s Limit Africa report both of their organizations published last year with Oil Change International — that a whopping 70% of planned fossil fuel projects in Africa are at a higher risk becoming “stranded” because they involve relatively costly methods of production and lots of supporting infrastructure.

Even in ‘regular’ times, fossil fuels have not brought riches, they highlighted. In 2018, Nigeria overtook India as the country with the greatest number of people living in extreme poverty. In Mozambique, which is where Lemos runs Justiça Ambiental, it is currently the site of Africa’s single largest foreign direct investment project. This vast $20 billion fossil fuel mega-beast includes an offshore natural gas field and an associated onshore liquefied natural gas facility.

But as with almost all of the fossil fuel projects backed by international public finance, it will not benefit the locals. The gas is intended for export, not to help expand energy access to the 70 percent of the country living without electricity.

Rightly Bassey and Lemos noted that “The greatest share of the burden of addressing climate change lies with the major polluters—the wealthy countries of Europe, North America, and East Asia—that are disproportionately responsible for causing the crisis.”

But Africa does not have to carry on drilling, exploiting its people, and polluting its lands and fuelling corruption. There is another way. They pointed out that Africa has the richest solar resources of any continent in the world but has less than one percent of the world’s total installed solar power capacity. “Investing in renewable energy in Africa is not just the right thing to do—it is the sensible thing to do”, they wrote.

They ended with a plea: “Don’t replicate the mistakes made by so many others in the past century.” And next month, those mistakes will finally be ruled on in a Dutch court.