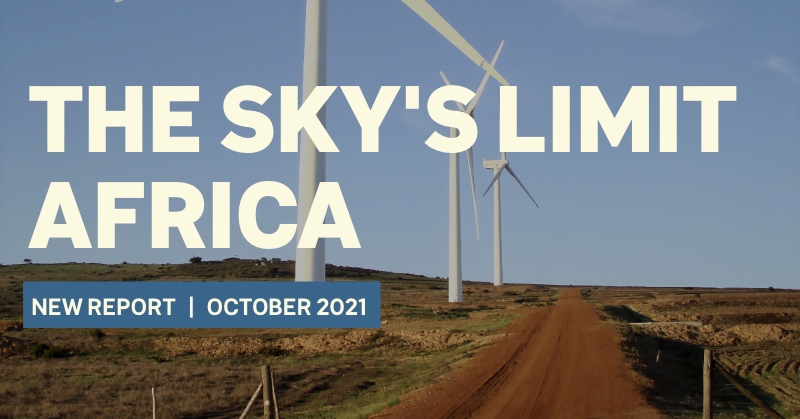 The Sky’s Limit Africa assesses fossil fuel industry plans to sink USD $230 billion into the development of new extraction projects in Africa in the next decade — and USD $1.4 trillion by 2050. It finds these projects are not compatible with a safe climate future and that they are at risk of becoming stranded assets that leave behind unfunded clean-up, shortfalls of government revenue, and overnight job losses.

In May 2021, the International Energy Agency (IEA) released its first global scenario compatible with limiting global warming to 1.5 degrees Celsius (°C) and found that new oil and gas fields and coal mines are incompatible with this urgent climate goal. The IEA’s report bolstered existing research from Oil Change International and many others showing a managed phase-out of global fossil fuel production is urgently needed to avoid the worst impacts of climate change.

The climate impacts, human costs, and economic risks of new oil, gas, and coal projects mean that no new fossil fuel extraction projects should be approved – in Africa or anywhere. This report makes the case for a gradual, equitable, and managed phase- out of fossil fuel production in Africa alongside a just transition to renewable energy and green economies. Phasing out fossil fuel production does not mean halting the use and production of fossil fuels in Africa overnight. Rather, it means starting widespread planning now to ensure there is time and resources for clean-up and for a just transition for the workers and communities that depend upon production.

The costs of this phase-out should not and cannot be borne equally: Wealthy countries in the Global North most responsible for historic and current emissions must move first and fastest to phase out their fossil fuel production and pay their fair share for the global energy transition.

Poor contract terms, industry-friendly subsidy and royalty frameworks, debt traps, corruption, and the outsized ownership of fossil resources by multinational corporations have all meant fossil fuel production in Africa has not historically served as a vehicle for just development, energy access, or resource sovereignty. As the industry faces increasing systemic financial risks, the possibility that it ever could promote just development has faded. Governments choosing to pursue new oil, gas, and coal extraction now risk locking themselves out of a transition to renewable energy and other green sectors.

We start by reviewing the impacts of fossil fuel production in Africa to date and assessing how increasing threats to the sector are likely to influence these outcomes.

Next, we map overall projected fossil fuel production as well as production from new projects in Africa between 2020 and 2050, using a model from the industry consultancy Rystad Energy. We highlight that:

In the report, we also profile some of the impacts of fossil fuel development in specific countries and the people-powered movements fighting to stop them:

The year 2020 provided a snapshot of what an unmanaged decline could look like in the oil and gas sector globally. This process has hit the most vulnerable countries and communities hardest, including many of those heavily dependent on oil and gas exports in Africa. As environmental justice and other social movements in Africa have long contended, moving past fossil fuels provides an opportunity to build an energy system and wider economy that is local, equitable, and democratic instead.

Transitioning in a fair way will require local decision-making and consultation to allow communities to determine how the energy transition should look in their regions. However, we put forward some broad principles for what transitioning our communities to a renewable, fair, and regenerative economy must include: a phase out of fossil fuels, strong social movements and trade unions, just transition plans for and led by fossil fuel workers and impacted communities, economic diversification with people and planet in mind, renewable energy for all, fostering local ownership and democratic control of resources, food sovereignty, rejecting false solutions and green extractivism, fostering deeper regional cooperation, and ensuring polluters pay for the damages they have caused.

Building off the Communiqué of the 2020 Africa Energy Leaders’ Summit and a framework for a globally equitable phase out of fossil fuels from Muttitt and Kartha (2020), [6] we make the following core recommendations to African governments:

Throughout this report, we emphasize that wealthy country governments must do their fair share as well. We provide recommendations that would ensure they (a) move first and fastest in phasing out fossil fuel production, (b) cease fossil fuel finance and other actions hindering the just transition of countries in Africa, and (c) pay to support just transitions from fossil fuels throughout Africa and across the Global South in line with their historic and ongoing responsibility for the climate crisis.