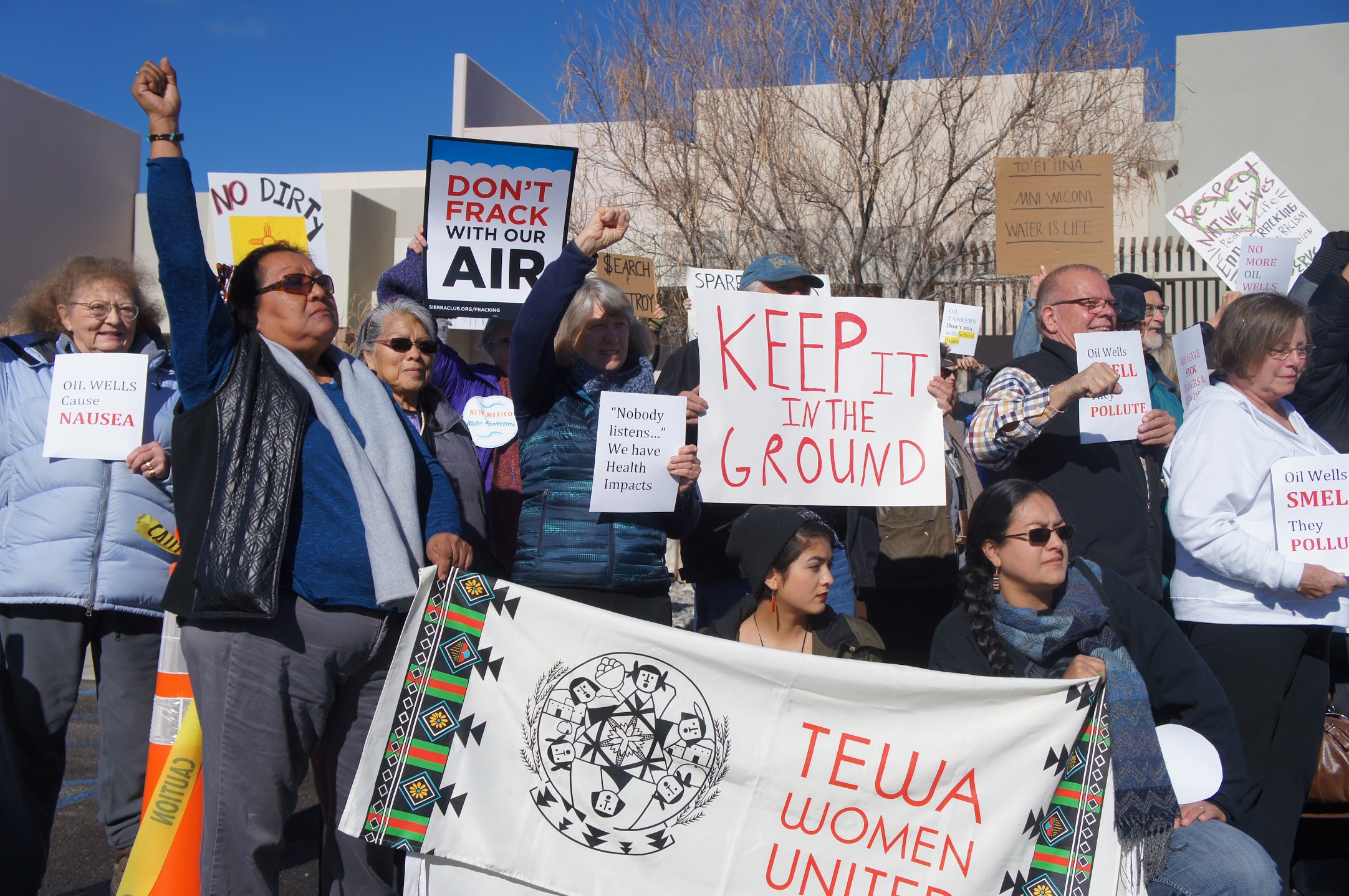 WASHINGTON — Environmental justice, Indigenous, climate and conservation groups from across the country announced today that they have delivered millions of petitions and public comments, and letters from hundreds of organizations, supporting a halt on new fossil fuel leasing and permitting on public lands and oceans.

The Biden administration is expected to order a leasing ban Wednesday.

Biden has promised to ‘ban’ new leasing and permitting activities. Calls to ban fracking on federal lands began in began in 2013 and expanded in 2015 to oppose all new fossil fuel leasing. Virtually every acre of federal lands leased for oil and gas by the Trump administration is under some form of legal challenge.

Millions of people have spoken out from all corners of the U.S. where federal fossil development is harming public health and worsening the climate and extinction crises.

In December nearly 600 groups representing millions of Americans sent to Biden’s transition team a draft executive order outlining how the next Interior secretary could implement the president’s directive.

Images for media use of past lease sale protests.

“Too many federal lease sales have already sacrificed the Greater Chaco region for short-term profit. Local Navajo communities, through little or no ‘meaningful consultation,’ have consistently borne too much of the environmental and social impacts from federal oil and gas leasing. As a result, Navajo Nation communities in northwestern New Mexico have suffered increased coronavirus morbidity, a methane cloud visible from space, and some of the worst air quality in the U.S. There has to be a balance point: people over money. I welcome an end to federal fossil fuel leasing and the necessary transitions to more sustainable economies for the Navajo Nation,” said Navajo Nation Council Delegate and Chair of the Health, Education and Human Services Committee Daniel Tso.

“The waters of the Gulf of Mexico are being polluted, which is throwing all life out of balance. Rapid expansion by the fossil fuel industry threatens our coastal communities. Drilling for fossil fuels is an attack on our tribal identity and our ways of life,” said Juan Mancias, Tribal Chairman of the Carrizo Comecrudo Tribe of Texas. “The Deepwater Horizon disaster showed the damage even a single spill can do to our waters and the environment — it’s time to end new leases for oil and gas.”

“We need to end Arctic oil drilling, both offshore and on federal lands,” said Dune Lankard, executive director of Native Conservancy in Alaska. “Like many Alaskans who were devastated by the Exxon Valdez oil spill, as an original Native inhabitant, commercial and subsistence fisherman, I intimately understand how dirty and dangerous all oil drilling is. Here we are 30+ years later and our fisheries and wildlife has never fully recovered from the Exxon spill. It’s time that we as a human race unite and come together, and take care of our planet, including our communities, wildlife, climate and keep this oil in the ground.”

“For too long, Appalachian Ohio has been a sacrifice zone, making the Ohio River one of the most contaminated bodies of water in the country. The fracking boom in this area has degraded the environment and has threatened the health and safety of its residents with pollution, gas leaks, and explosions, while failing to deliver the economic benefits the industry promised,” said Becca Pollard with Keep Wayne Wild in Ohio. “Halting new fossil fuel leasing on public land, and on the Wayne National Forest, is a major step towards protecting the ecology, air, water, and scenic beauty of the Wayne National Forest, and surrounding communities. An end to fracking on public lands in the watershed and across the country will cause an immediate increase in water, soil, and air quality and the overall health of the streams, forests, and wildlife of the region. We eagerly await additional measures that will end this harmful mineral extraction in the region altogether.”

“The extraction of fossil fuels has had a devastating impact on public lands, destroying and fragmenting wildlife habitats and causing catastrophic declines for species like the greater sage grouse,” said Erik Molvar, Executive Director for Western Watersheds Project from Laramie, Wyoming. “Climate change and direct habitat loss are the twin causes of the current biodiversity crisis, and we should seize the opportunity to make public lands and oasis for native wildlife by keeping fossil fuels in the ground on federal lands and mineral estates.”

“Climate pollution is warming and drying Colorado River to the detriment of people and endangered species alike,” said John Weisheit, conservation director of Living Rivers in Moab, Utah. “A ban on new federal fossil fuel leasing as a critical step towards protecting the river that is the river that is literally the lifeblood of the American Southwest. The Colorado River’s future will turn on our ability to shift to low-carbon, low-water energy systems, so the dangerous policies of the last administration must be changed with urgency and vigor.”

“The North Fork Valley in Southwest Colorado is in the middle of a climate hotspot warming faster than the global average and has been calling for no new oil and gas leasing of our surrounding public lands and watershed for over a decade. 53,000 no-leasing public comments were submitted to the Bureau of Land Management in 2016, and ignored when the BLM approved the Uncompahgre Resource Management Plan in April 2020 to open up 95% of BLM lands and minerals to oil and gas leasing,” said Natasha Léger, executive director at Citizens for a Healthy Community in Paonia, Colorado. “A ban on new fossil fuel leasing and permitting on public lands is critical to our hard fought efforts to preserve vital local ecosystems necessary for a resilient and livable future.”

“The Obama-Biden ‘all of the above’ energy strategy included leasing over 5 million acres of public lands for fracking and drilling, and Trump only made things worse,” said Thomas Meyer, national organizing manager at Food & Water Watch. “The American people heard Biden’s commitment to ban fracking on public lands, and they gave him a mandate to act. If President Biden really plans to listen to the science and ‘build back better,’ then banning fracking on public lands should be at the top of his to-do list.”

“We’re in a climate crisis and can’t afford one more acre of public land being committed to destructive fossil fuel development,” said Taylor McKinnon, a senior campaigner at the Center for Biological Diversity. “There are already more fossil fuels being developed in the world than can be safely burned. It’s time to stop expanding fossil fuel extraction and begin phasing it out altogether. We’re looking forward to Biden taking this important first step.”

“For years, people across the country have demanded action to halt fossil fuel leasing,” said Nicole Ghio, Friends of the Earth senior fossil fuels program manager. “The Biden administration must keep its promise to end new drilling on public lands and build a just transition that serves workers and communities.”

“It’s critical for President Biden to take swift action to not only end the sale of public lands for fracking, but undo the damage done by the Trump administration,” said Jeremy Nichols, climate and energy program director for WildEarth Guardians in New Mexico. “With record legal challenges, the federal oil and gas program is nothing but an injustice, President Biden needs to put public lands to work for people and the climate, not for the fossil fuel industry.”

“The climate math is simple — we’re in a hole, and we need to stop digging,” said Collin Rees, senior campaigner with Oil Change International. “Climate leadership in 2021 means keeping fossil fuels in the ground and investing in an equitable transition for communities and workers. Joe Biden needs to Build Back Fossil Free, and ending oil and gas leasing on public lands and waters would be a very good early step.”

Existing laws give presidents the authority to end new federal fossil fuel leasing. Hundreds of organizations have petitioned the federal government to end new onshore and offshore leasing. Nearly 600 groups have called on President Biden to enact his campaign commitments to “banning new oil and gas leasing on public lands and waters.”