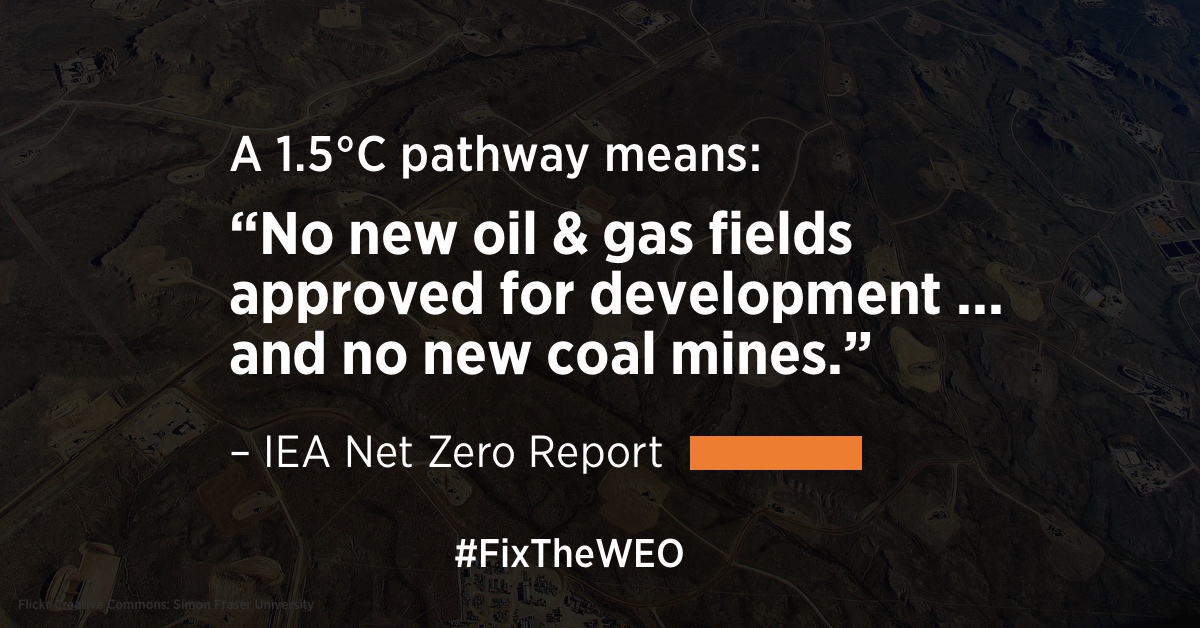 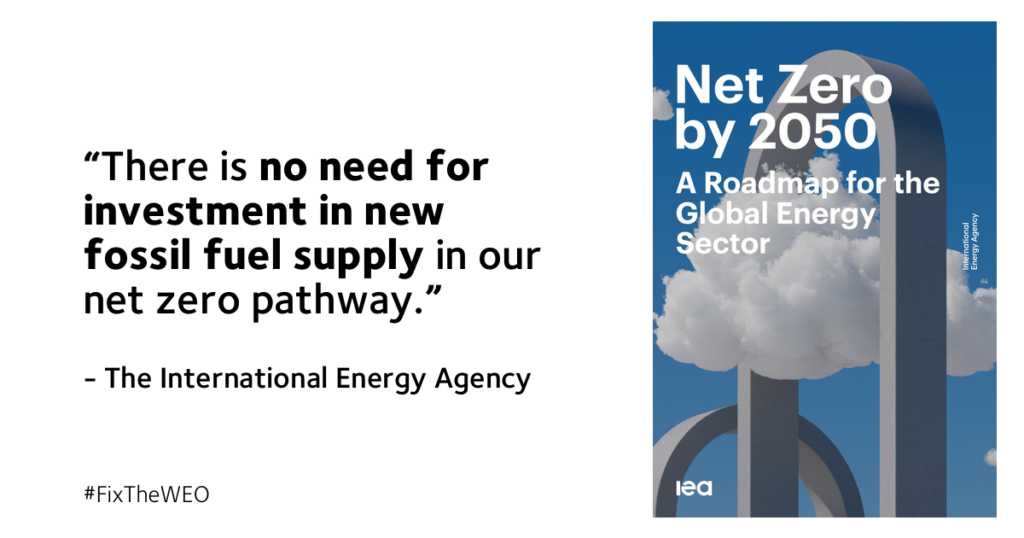 For years, we’ve seen fossil fuel companies and governments justify their fossil fuel expansion plans – from the TransMountain tar sands pipeline expansion to Arctic oil drilling to the Adani coal mine – on the backs of scenarios from the International Energy Agency (IEA).

This was possible because, until today, the world’s most influential energy modelling agency had not produced a scenario actually aligned with the full ambition of the Paris Agreement goals. That’s true no longer.

Today, after years of pressure from climate advocates, investors, businesses, and diplomats, the IEA finally released its first ever fully fledged energy scenario aligned with the urgent goal of limiting global warming to 1.5 degrees Celsius (°C). As with past IEA modelling efforts, this new scenario needs some fixes (more on that below), and we’re still analyzing all of its implications. But one conclusion in particular stands out to us at Oil Change International (OCI).

In its Summary for Policymakers, in a bolded headline, the IEA finds that, “There is no need for investment in new fossil fuel supply in our net zero pathway.”

They add, “Beyond projects already committed as of 2021, there are no new oil and gas fields approved for development in our pathway, and no new coal mines or mine extensions are required.”

This is huge. An agency that has consistently boosted new oil and gas development in its flagship annual World Energy Outlook (WEO) is now backing up the global call to stop the expansion of fossil fuel extraction.

The oil and gas industry has lost a powerful shield

Big Oil and Gas companies and the governments of fossil fuel-producing countries have lost one of their key covers for claiming that developing new oil and gas reserves is fully consistent with their commitments to “net zero” or the Paris Agreement. People around the world who have been demanding that governments, banks, and other financial institutions stop enabling the expansion of oil, gas, and coal extraction can point to the IEA’s “authoritative” analysis reaching the same conclusion.

Of course, the IEA is behind the curve. OCI has been analyzing the disconnect between new fossil fuel development and the Paris goals since 2016. We found then that already operating or under construction oil and gas fields and coal mines contain enough fossil fuel reserves to push the world well beyond 1.5 degrees of warming. The implication was as clear then as it is now: The world must stop digging new holes, and focus instead on managing a rapid and equitable wind down of already developed extraction. 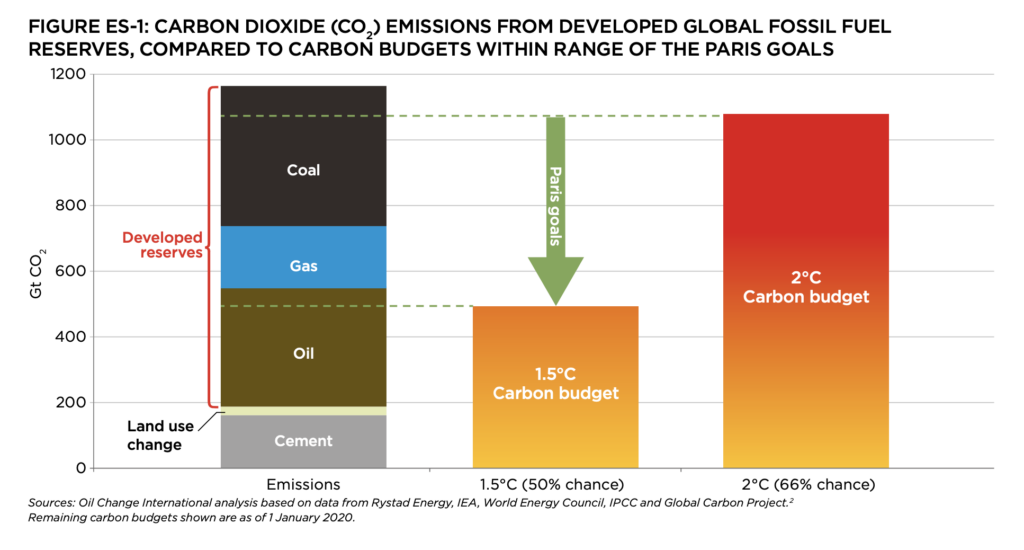 With the IEA’s fully Paris-aligned scenario now saying the same, companies like Shell and Total can no longer comfortably point to the IEA to defend their plans to expand gas extraction. The UK government, which helped commission this new IEA report, will have a tougher time claiming that its decision to keep the door open to new licenses for offshore exploration and extraction fits with its Paris commitment. In fact, IEA director Dr. Fatih Birol has already today confronted the UK over its continued support for oil, gas, and coal expansion and investment. And major fossil banks like JPMorgan Chase and Citi have a new minimum baseline for “stress testing” their portfolios and the legitimacy of their net zero plans.

The IEA finally embracing a 1.5°C-aligned pathway as “the energy future we all need” is a major milestone. But the IEA must do much more beyond today’s report to prove its climate credibility and commitment, particularly given the agency is positioning itself to play an advisory role at COP26.

To guide policies and investments towards a future fully aligned with the Paris goals, the IEA must go beyond developing a 1.5°C-aligned scenario and position it at the heart of the WEO. It is the WEO that decision makers look to year after year to guide trillions in public and private capital, and which the IEA itself calls the “gold standard of energy analysis.”

Dr. Birol made a welcome announcement last week, committing that this new 1.5°C-aligned scenario will be “integral” to WEO 2021 and future WEOs. But we don’t know yet what that will mean in practice. 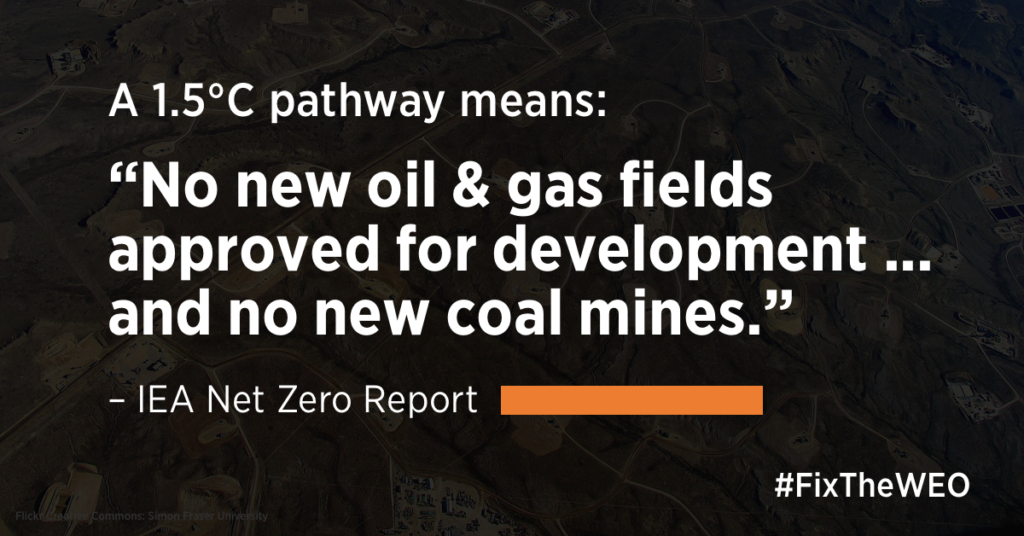 In WEO 2019, the IEA dismissed a 1.5°C-aligned energy transformation as “very difficult and very expensive” and spent only seven of 600 plus pages discussing it. WEO 2020 included a short 1.5°C-aligned energy “case” to 2030, the building block of today’s report. However, that case was rarely mentioned outside of the chapter devoted to it. The summaries of other chapters still primarily focused on the Stated Energy Policies Scenario (STEPS), a pathway towards catastrophic levels of global warming.

The scenario that the IEA positions as the central scenario in the WEO commonly becomes what governments and investors use as their default for energy decision making, guiding trillions of dollars of investment. The IEA must seize this moment to transform its flagship WEO report, putting a 1.5°C scenario at the center, and focusing each headline, chapter, and graph on the implications of it.

Risky modelling choices must be fixed

The IEA also needs to revisit and fix risky and bad choices within its modelling between now and WEO 2021. Below we provide an overview of ways in which the IEA must improve its scenario to drive the world towards the bold and just energy solutions we need, based on initial analysis from OCI and partner groups.

Underestimating wind and solar. While the IEA closing the door on new fossil fuel extraction is a welcome shift, the IEA’s new “Net Zero Energy” roadmap continues to underestimate the growth potential and cost declines of solar and wind power, a chronic problem at the IEA. Kingsmill Bond, an energy transition expert at Carbon Tracker Initiative, has noted that the IEA’s scenario forecasts rapid solar capacity growth until 2030 (22 percent per year). But that growth drops to 8 percent per year to 2040 and 3 percent per year to 2050. The latest scenario by the Energy Transitions Commission shows solar power providing twice as much energy in 2050 compared to the IEA’s new scenario (27-35 terawatts vs 14.5 terawatts).

As a consequence of underselling wind and solar, the IEA makes room for dirty, riskier alternatives to meet energy demand.

Gambling on CCS. The IEA assumes that carbon capture and storage (CCS) projects will wipe out 1.6 billion tonnes (Gt) of CO2 pollution as soon as 2030. The IEA admits that CCS projects only have capacity to sequester 0.04 Gt of emissions at present. Most of that capacity is currently devoted to pumping more oil out of the ground. Relying on CCS to grow almost 4,000 percent over the next nine years is wildly optimistic given the technology’s poor track record and failure to take off to date. It’s also an irresponsible gamble. The IEA’s own report acknowledges that, with greater investment in already proven renewable energy technologies, it wouldn’t be necessary to expand fossil fuel-based CCS. This alternative “Low CCUS Case” mentioned in the report should be the base assumption.

Clinging to fossil gas. By gambling on a massive scale-up of CCS taking away some of its emissions, the IEA’s 1.5°C scenario also makes room for dangerous levels of fossil gas reliance this decade. In the IEA’s model, gas does not peak until 2025 and declines by only 6 percent below 2020 levels by 2030. By contrast, the 2020 Production Gap Report, released by the United Nations Environment Programme and a consortium of global research organisations, shows gas declining by a median of 3 percent per year between now and 2030 in 1.5°C-consistent pathways. Moreover, even if the carbon emissions from burning fossil gas to produce electricity or hydrogen are effectively captured, that will not remove the health and pollution impacts communities face where the gas is being extracted.

Projecting dangerous growth in bioenergy. Fossil fuel production and use should be replaced with truly clean energy solutions. Bioenergy does not fit that bill. Yet, the IEA’s scenario relies on a 65 percent increase in bioenergy from 2020 to 2050, increasing the total land area devoted to bioenergy production by 25% to 410 million hectares in 2050, an area the size of India and Pakistan combined. Growth in bioenergy production is already linked to land grabs and human rights violations, food insecurity, and loss of biodiversity. As Hannah Mowat, campaigns coordinator with Fern, puts it, “Instead of burning trees for energy, we should focus on cutting fossil fuel use, maximising energy efficiency and increasing renewables such as solar, wind, heat pumps and geothermal.”

All in all, today’s 1.5°C report release is a major step forward for the IEA. Its first effort to model a 1.5-aligned energy future makes a clear case that this transformation is critical and achievable, requires deep emissions cuts by 2030 and a “huge decline” in fossil fuels, and, if done in a just and inclusive way, would improve people’s well-being and livelihoods all over the world.

At the same time, we can’t grade the IEA only against its past performance. The ultimate measure is whether the agency drives forward solutions that are bold enough to stem the climate crisis and protect the communities on its frontlines, not the polluters responsible for causing it. In this regard, the IEA has more homework to complete.

But now that the head of the IEA is proclaiming that, “The world does not need any new investments in oil, coal or gas,” it will be a whole lot harder for governments, oil and gas companies, banks, and insurers to justify their own support for continued expansion. And that is undoubtedly a huge win for the climate.