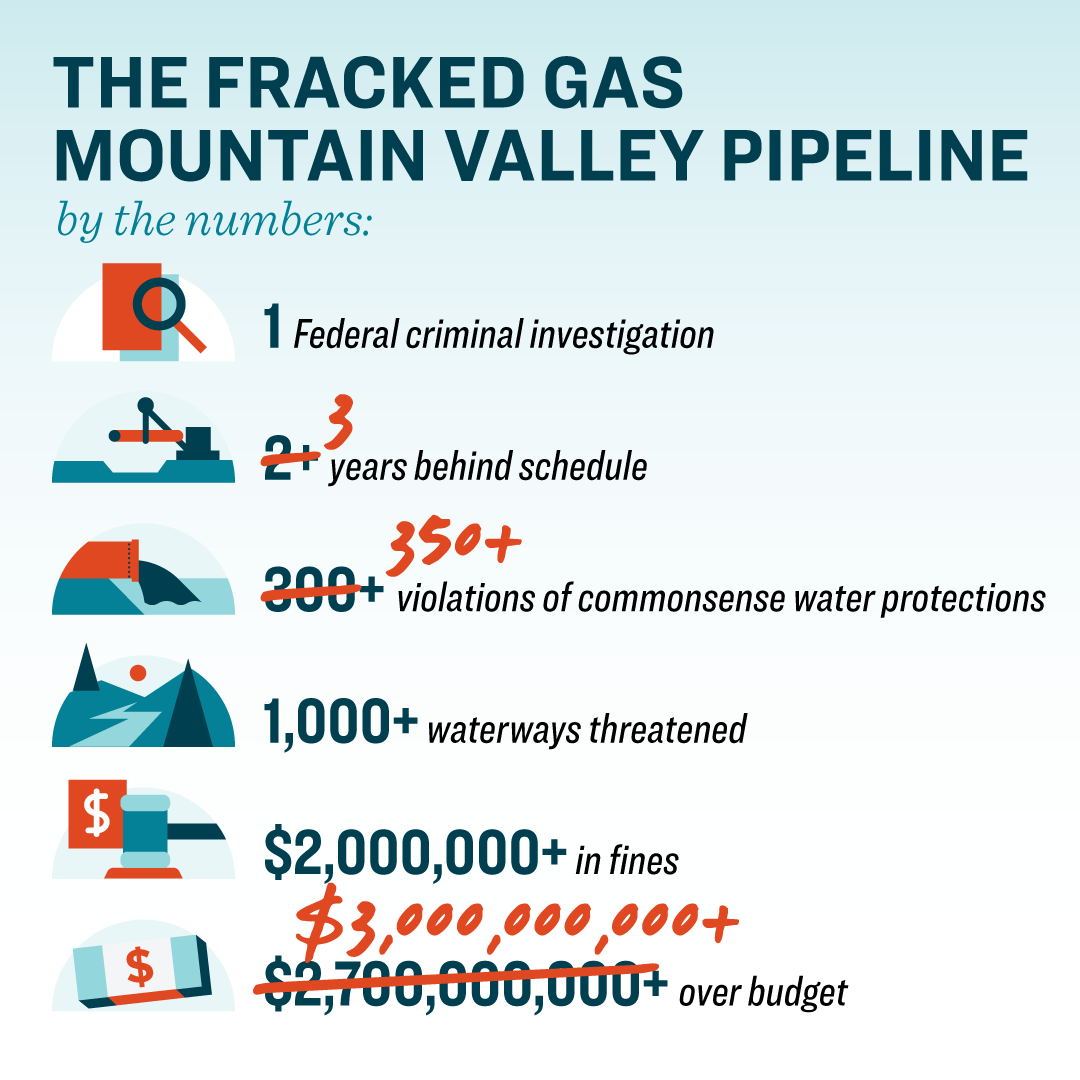 DivestMVP Orgs and Their 7,600,000 Members Highlight “Financial and Reputational Risk” of MVP

PEMBROKE, VA — Today, a group of environmental and financial organizations announced the launch of the DivestMVP coalition.

The organizations, which collectively represent over 7,600,000 members and supporters, are highlighting the financial instability of the fracked gas Mountain Valley Pipeline and why it is such a risky bet for investors. DivestMVP will hold an introductory webinar this Thursday, February 25, at 6:00pm ET to brief supporters on the campaign.

The controversial project is over three years behind schedule and has nearly doubled its original budget, the result of a rushed and shoddy permitting process that has not withstood legal challenges. In addition to the extraordinary delays and cost overruns, regulators have imposed millions of dollars in penalties on MVP for violating over 350 environmental and water  protections.

Moreover, the Mountain Valley Pipeline was the subject of a criminal investigation and continues to face intense and ongoing grassroots opposition and is nowhere near finished, with the steepest and most challenging sections of its 303-mile route still remaining. The uncertainty surrounding the project reminds analysts and industry watchers of similar problems that led to the cancellation of the nearby Atlantic Coast Pipeline, and many are openly wondering if the project will ever be completed at all.

In response to the DivestMVP campaign launch, coalition organizers released the following statements:

“We’re launching the DivestMVP coalition to make sure investors and the public know just what a risky and unnecessary gamble the MVP is. The project is over three years behind schedule, has nearly doubled its original budget, and is bogged down in a self-inflicted permitting quagmire with no end in sight. The polluting corporations digging the trench for this pipeline might as well be throwing their investors’ money into a 300-mile long hole. At some point, the financiers of this dirty, dangerous project are going to realize what a bad bet it is and walk away from the Mountain Valley money pit once and for all.”

“Banks have poured billions of dollars into a project that’s bad for the climate and bad for the communities in its path. MVP risks becoming a stranded asset as renewable energy overwhelms the demand for fracked gas. It’s past time for investors to divest from MVP and its backers.”

“The Mountain Valley Pipeline is unneeded, behind schedule, massively over budget — and still doesn’t have key permits necessary for construction. Financial institutions should recognize the extensive financial and climate risks of this project and not provide funding for more dirty energy.”

McKenna Dunbar, the Founder and President of The Ecological Justice Initiative, said:

“It is evident that a just transition from fossil fuel based infrastructures to renewable energy technologies is necessary to expand energy capacity and further initiatives that promote sustainable and equitable energy needs in the lives of residents. This moment of reckoning, in a society plagued by environmental injustices, severe climate impacts, heightened energy burdens, as well as senseless policy enactments backed by government organizations and corporate entities, serves as a concentrated reminder to policymakers and corporate stakeholders to choose American people over profit.”

“The tide is turning both here in Virginia, nationally, and globally — fossil fuels, and especially new fossil fuel infrastructure projects, are on the way out. Continuing to fund a project that will inevitably be cancelled, like the Atlantic Coast Pipeline and Keystone XL, is a waste of resources and time. The damage already done cannot truly be made whole, but we must do something now to stop future injustices. Divest from MVP, and instead invest to build a livable, thriving, clean energy future.”

“For those of us in harm’s way of these dirty, dangerous fracked gas projects, divestment is a powerful tool for holding the financiers accountable. By walking away from these banks, we are refusing to bankroll our own destruction at the hands of the Mountain Valley Pipeline. Money is the language that these big banks speak, and when we take it away from them, they hear us loud and clear.”