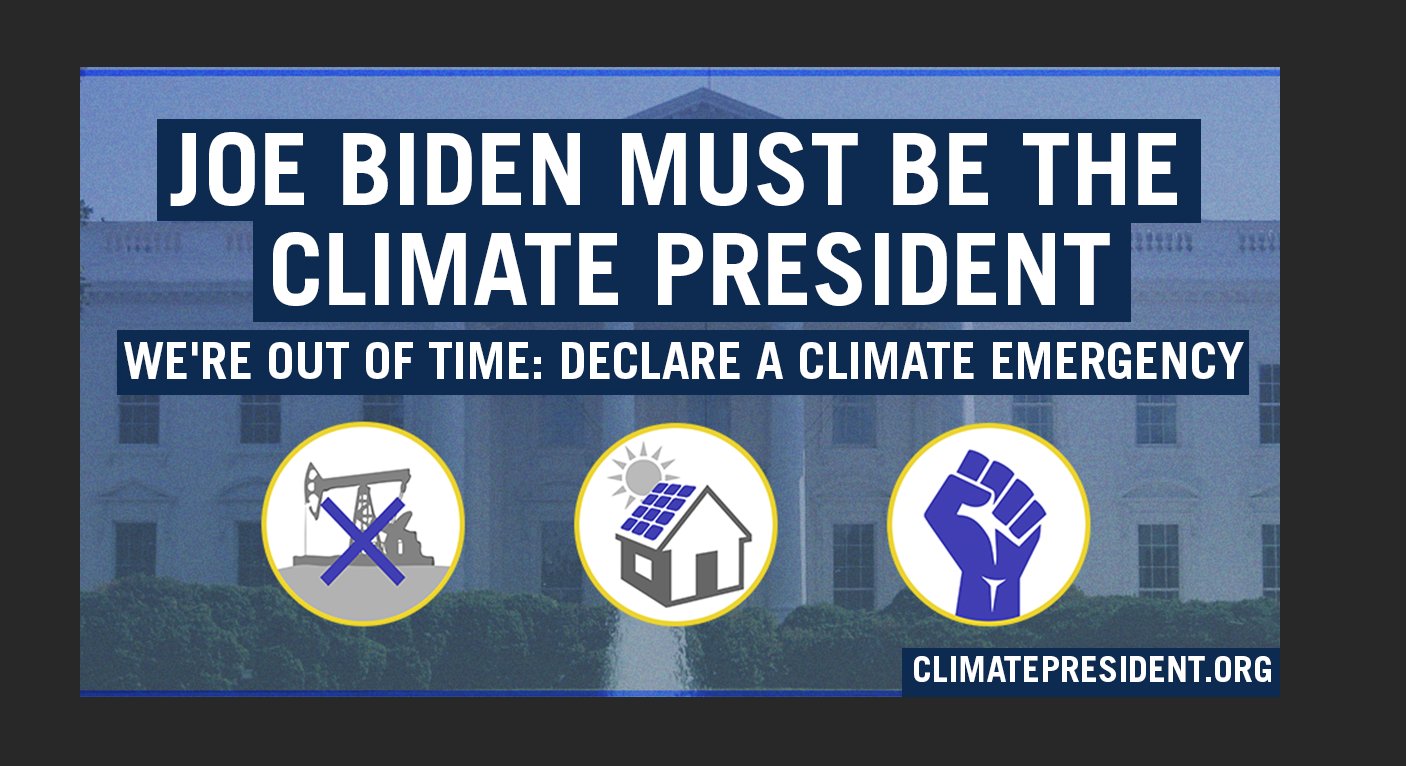 WASHINGTON — More than 380 groups today called on President-elect Joe Biden to sign an executive order to confront the climate emergency with the full power of the executive branch as soon as he takes office.

The groups presented Biden with a draft executive order with a suite of actions the president can take under existing law to phase out fossil fuels, protect workers and communities and “build back better” to a just, clean-energy economy.

“Our house is ablaze with a fire fanned by Trump for four years,” said Kassie Siegel, director of the Center for Biological Diversity’s Climate Law Institute and one of the key authors of the order. “There’s no time to lose. Biden must take bold action the moment he steps into the Oval Office, without punting to a dysfunctional Congress. This order is the road map for Biden to be the climate president we need.”

The executive order begins with the declaration of a climate emergency under the National Emergencies Act. That statute, which has been used by every president since it was passed in 1976, unlocks special powers for the president and federal agencies. The groups are urging Biden to use those emergency powers for two key actions: reinstating the ban on crude oil exports and redirecting a portion of military spending to clean-energy infrastructure.

The rest of the climate actions can be accomplished with ordinary executive powers under existing law. They include ending the approval of new fossil fuel infrastructure projects, banning fracking on public lands, redirecting financial flows from fossil fuels to clean energy and holding fossil fuel polluters accountable through the Justice Department.

The order directs full use of the Clean Air Act to set stringent constraints on greenhouse gas pollution across economic sectors and calls for the mobilization of domestic industries to manufacture clean-energy technologies under the Defense Production Act.

It also includes measures to advance environmental and racial justice, including directing all federal agencies to pro-actively “mitigate” — instead of only “identify and address” — disproportionate health and environmental impacts of their programs on communities of color and communities of low wealth.

“Biden’s election victory is due to the mobilization of countless communities on the frontline of climate chaos,” said Dallas Goldtooth, Keep it in the Ground campaigner at Indigenous Environmental Network. “Now’s the time for Biden to honor their efforts to build a better tomorrow for their children. The president-elect must follow the people’s mandate and end the approval of all fossil fuel infrastructure projects.”

The order establishes an inter-agency Just Transition Council to work with unions, Indigenous peoples, frontline communities and others to create a comprehensive, multi-industry program that guarantees support and protection for workers and communities.

“This is a jobs plan as much as a climate plan,” said Joe Uehlein, founding president of the Labor Network for Sustainability. “Biden can address the climate emergency and create thousands of good-paying union jobs in the process. He can’t lose unless he goes back to business as usual.”

The climate executive order is supported by a wide range of activist groups, including the Climate Justice Alliance, Oil Change International, Data for Progress, GreenFaith, Greenpeace USA, Indivisible, People’s Action, and the Sunrise Movement. It’s part of a range of proposals the Center and allies are submitting to the Biden transition team ahead of the inauguration. These include an executive order to stop new fossil fuel leasing on public lands and waters and an executive order addressing the extinction crisis.