Later today in Stockholm, a conference organised by the business group, the International Chamber of Commerce, examines “Bridging the Climate Change Policy Gap.”

The conference flier asks the question, that post the historic Paris climate change agreement “where do we go from here?”

In moving forward, the conference flyer notes there “appears to be a policy gap” with a lack of clear direction on legal and policy frameworks.

There is also a fundamental problem with perception.

In nearly 30 years of working on oil and climate change, I beleive that never has the bridge been greater between the science which is demanding urgent action and a President-elect of the US, who not only believes there is no need for action, but believes that climate change is a hoax.

If it was not so scary it would nearly be laughable that a multi-billionaire businessmen and soon to be most powerful man on the planet can have such fundamentally flawed views on climate change. How can we expect the US to enact coherent climate change policies on an issue the new President doesn’t even believe exists?

Interestingly, long term critic of the establishment, Noam Chomsky, has argued that the biggest news on 8 November this year was not so much the Trump victory, but a report issued by the World Meteorological Organization at the COP22 in Morocco that the past five years were the hottest on record.

This is empirical evidence that cannot be ignored.

Chomsky says: “It is hard to find words to capture the fact that humans are facing the most important question in their history—whether organized human life will survive in anything like the form we know—and are answering it by accelerating the race to disaster.” 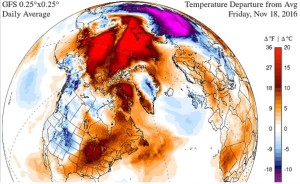 Since Trump’s election the news on climate has gotten worse. As Chris Mooney and Jason Samenow noted in the Washington Post last week, there are seriously worrying signs from the Arctic.

They note that “in fall of 2016 — which has been a zany year for the region, with multiple records set for low levels of monthly sea ice — something is totally off. The Arctic is super-hot, even as a vast area of cold polar air has been displaced over Siberia.”

One Arctic specialist, Jennifer Francis, from Rutgers University, told the paper:  “It’s about 20C [36 degrees Fahrenheit] warmer than normal over most of the Arctic Ocean, along with cold anomalies of about the same magnitude over north-central Asia … The extreme behavior of the Arctic in 2016 seems to be in no hurry to quit”.

The news continues to get worse from both polar extremes: Yesterday, CNN reported that “For what appears to be the first time since scientists began keeping track, sea ice in the Arctic and the Antarctic are at record lows this time of year.”

CNN quoted Walt Meier, a research scientist with the Cryospheric Sciences Laboratory at NASA’s Goddard Space Flight Center, who has tracked sea ice since 1979: “It looks like, since the beginning of October, that for the first time we are seeing both the Arctic and Antarctic sea ice running at record low levels”.

Again this is all empirical evidence that cannot be ignored.

And if Trump cannot take climate change seriously then how can we take him seriously as President?

What we have learnt again over the weekend is that this is a man who does not like criticism. He gives it but cannot take it. Over the weekend, the President-elect demanded an apology from the cast of the Broadway hit “Hamilton”, after one of the actors, Brandon Victor Dixon, directly addressed Vice President-elect Mike Pence after the show to “uphold our American values”.  Trump took to Twitter to demand an apology.

We have to fight back and use all the tools of nonviolent social change at our disposal.

And in these dark times, one of those must be humour. As one British commentator pointed out last month, “With his painted face and propensity for nonsense, is Donald Trump not the ultimate clown?”

Tragically for many concerned about environmental issues, he maybe the ultimate climate change clown.