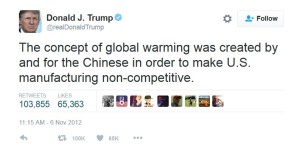 There have been many words written about Donald Trump since his Presidential victory, but one we must add to the list is: hypocrite.

Here is a man who has publicly called climate change a “hoax”, a concept that was created by the Chinese and who has promised to rip up the UN Paris agreement. But yet he is so concerned about the effects of climate change on his Irish golf course that he wants to build a sea wall.

He is a climate change hypocrite.

Here is a man who ran as a Beltway outsider and vowed to “drain the swamp” but as Politico point out “the president-elect’s transition team is packed with veterans of the GOP establishment, as well as with lobbyists for the fossil fuel, chemical, pharmaceutical and tobacco industries.”

He is a hypocrite.

And here is a man who vowed to take on the lobbyists and all he is doing is hiring lobbyists.

He is a hypocrite.

Let’s first look at some of his public statements on climate. On 6 November 2012, he tweeted: “The concept of global warming was created by and for the Chinese in order to make U.S. manufacturing non-competitive.”

The concept of global warming was created by and for the Chinese in order to make U.S. manufacturing non-competitive.

Just over a year later, on 6 December 2013 he tweeted: “Ice storm rolls from Texas to Tennessee – I’m in Los Angeles and it’s freezing. Global warming is a total, and very expensive, hoax!”

Later that month, he said: “We should be focused on clean and beautiful air – not expensive and business closing GLOBAL WARMING – a total hoax”.

We should be focused on clean and beautiful air-not expensive and business closing GLOBAL WARMING-a total hoax!

The following month, he tweeted, “This very expensive GLOBAL WARMING bullshit has got to stop. Our planet is freezing, record low temps, and our GW scientists are stuck in ice.”

This very expensive GLOBAL WARMING bullshit has got to stop. Our planet is freezing, record low temps,and our GW scientists are stuck in ice

Climate change is such a hoax that, as Politico reported back in May, Trump is also trying to build a sea wall designed to protect one of his golf courses in Ireland – Trump International Golf Links & Hotel Ireland, in County Clare – from “global warming and its effects.”

Politico reviewed a permit application by the billionaire which “explicitly cites global warming and its consequences — increased erosion due to rising sea levels and extreme weather this century — as a chief justification for building the structure.”

The planning statement said: “A Do nothing/Do minimum option will have the least impact on [natural] processes but the existing erosion rate will continue and worsen, due to sea level rise, in the next coming years, posing a real and immediate risk to most of the golf course frontage and assets.”

Trump’s company even handed out a brochure to local residents outlining the “Need for Coastal Protection,” which stated “Predicted sea level rise and more frequent storm events will increase the rate of erosion throughout the 21st century.”

Moving on to his transition team, it includes Cindy Hayden from big tobacco company, Altria, who is in charge of Trump’s Homeland Security team; and J. Steven Hart, chairman of Williams & Jensen, whose client’s include Visa, Cheniere Energy, Coca-Cola, General Electric, PhRMA and United Airlines amongst others. And energy lobbyist Mike Catanzaro of CGCN Group who lobbies for the American Fuel and Petrochemical Manufacturers, as well as Koch Industries, who have poured tens of millions into funding climate denial.

One of those groups funded by Koch is the Competitive Enterprise Institute, an organisation which has done more than any to undermine climate science in the US. Much of this climate misinformation campaign has been led by Myron Ebell, a long-standing climate denier, who now heads Trump’s Environmental Protection Agency transition team.

The Competitive Enterprise Institute received over $2 million from Exxon between 1998-2007 for its climate denial campaigns.

Ebell could even head the EPA itself. If so, his appointment would set back climate science in the US decades with devastating consequences.

And so as he builds his sea wall in Ireland and works with Ebell on climate denial, you know that Trump is a true climate change hypocrite.

And Trump’s hypocrisy will kill.

As Dave Roberts says: “Trump’s election marks the end of any serious hope of limiting climate change to 2 degrees. Widespread suffering and misery from climate change are now effectively inevitable.”