Yesterday, the President released a video that I desperately want to love. It’s powerful, visually striking, and the rhetoric is near bang on.

Announcing an upcoming trip to Alaska, President Obama confronts the need for climate action head on. He is going to Alaska, he says, because it is on the front lines of climate change. Because livelihoods, communities, and the environment are suffering the impacts of a changing climate – but, as he also notes, “what is happening in Alaska isn’t just a preview of what will happen to the rest of us if we don’t take action; it’s our wake up call. The alarm bells are ringing...”

But actions speak louder than words. And as that video is released, the President looks poised to rubber stamp the last permit Royal Dutch Shell needs to drill for oil in the Arctic Ocean off of the coast of Alaska. 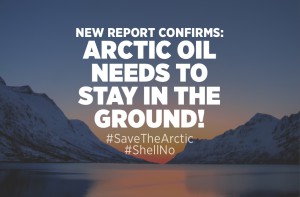 And that is the kicker – why instead of giving me hope, the video leaves me with a deep sense of frustration. In the midst of a rousing speech on climate urgency, the President is welcoming one of the biggest oil companies in the world to the melting Arctic to drill for fossil fuels we can never afford to burn if we act on climate change.

The President talks about alarm bells, but treats the melting Arctic like an invitation.

The report shows that Arctic oil can only be profitable in a world where oil demand soars, explosive growth in clean energy technology suddenly collapses, and where we have largely failed to tackle climate change, committing us to catastrophic increases in temperature.

President Obama really does seem to see the scale and urgency of the challenge, making it all the more difficult to accept his approval of Shell’s reckless Arctic drilling. Is it cognitive dissonance at its worst, or just downright hypocrisy? Or will the President seize the opportunity to say no to Shell and Arctic oil once and for all?

Send the President a message here asking him to do the right thing and deny Shell’s permit to drill. The climate crisis has already gone too far; record droughts, devastating storms, and intolerable heat waves… the last thing we need is to be digging ourselves deeper into the hole.

Tell the President to live up to his powerful words and turn Shell away from the U.S. Arctic Ocean.

And don’t forget to check out our new report for everything you need to know about why Arctic oil = Climate catastrophe.