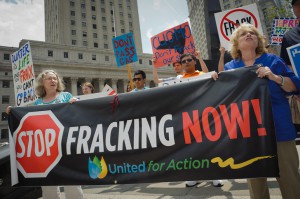 One of the great debates about fracking is whether it heralds a great new chapter in the age of oil or whether it is a small blip in the dying days of the fossil fuel era.

The oil industry would love us to believe the former, whereas the industry’s critics have been warning for years that we need to look behind the fracking hype to see what really is going on.

They have been arguing that maybe it’s time for a new business strategy, one that accepts the ecological risks of climate change and the financial risks of the industry’s assets becoming stranded.

The industry has responded to these concerns to carry on as it has always done, by drilling.

But the cracks are appearing rapidly in the facade. What we know is that fracking is different from conventional oil drilling in many ways, not least the fact you have to drill many more wells to extract the same amount of oil. In a sense you often have to run to stand still.

And given the low oil price, there is only so much running the industry will be able to achieve before running out of puff. The story in yesterday’s blog that the shale industry is going to start re-fracking wells in order to squeeze out more oil and gas, is really a sign that the industry is effectively in trouble.

And now Igor Sechin, the head of Russian oil company Rosneft and a close Putin ally, is warning that American fracking boom could soon turn to bust and that fracking industry could become the next “dotcom bubble”.

“We know that revolutions are short-lived and the US production increase is not well supported by reserves,” Sechin told an audience of industry executives in London on Tuesday.

The problem for the oil industry is explored in an informative piece by energy analyst Mark Lewis at Kepler Cheuvreux in the Financial Times today.

Lewis argues that the notion that the US shale revolution “was ushering in a new age of global oil abundance was always overdone and is looking more exaggerated by the day.”

Lewis explores one of the issues I wrote about in Monday’s blog – the declining rig count in the US, and argues that the falling count is indicative of an industry “in severe crisis”.

And here we get to the interesting part: The fracking boom in the US has been masking the decline in global production elsewhere. “The reason this matters is that US shale oil has been the main driver of global supply growth in the past few years”, argues Lewis. “Without US shale oil, global crude oil output would have been lower in 2014 than it was in 2005.”

The problem of this scenario is one I alluded to earlier: you have to drill many more fracked wells to maintain production. You have to run to stand still. And you need a high oil price to keep running. Not $50 a barrel. And if the bubble is about to burst, the industry could soon be in deep, deep trouble.

What you could argue is that the oil industry has been ignoring the hard truths of the market for a while. Essentially they have been drunk on the excesses of the fracking hype, but OPEC’s tactics – of refusing to cut production – have exposed the brutal short-comings of their strategy.

Last September, Lewis was the author of a Kepler Cheuvreux report entitled: “Toil for oil spells danger for majors”, which explored the dangers of a falling and rising oil price for the oil majors, companies such as Shell, BP and Exxon.

The report argued that maybe the majors should be reducing their capital allocation in high cost new projects and instead investing their money in renewables, instead. “This would enable them to become the energy majors of the future rather than ending up as the oil majors of the past” concluded the report.

Since that report was published the oil price has plummeted and the oil majors have started to shed jobs at a unprecedented rate. Even in these uncertain times, they are stuck in the mentality of the past, rather than the thinking of the future.