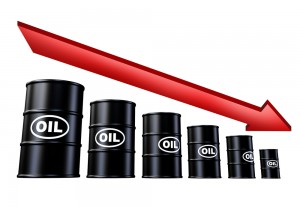 Everywhere you look there is carnage in the oil industry as the reality of low oil prices begins to bite.

From North America, to the North Sea and the Arctic, the low crude oil price is reshaping the size, shape and prospects of the industry.

One newspaper warns the US fracking industry is entering a period of “hibernation”, another that the oil industry’s plans for the Arctic are now in the “deep freeze”. The North Sea is in terminal decline too, any hopes of a revival killed off by the plummeting oil price.

Let’s start in North America, where the US rig count has fallen by a record 435 in the last nine weeks, according to industry data.

This means that rigs are being deactivated at a rate of nearly 100 a week, with less than a thousand rigs left by the end of the year, if current trends continue. Such is the slowing down of the fracking activity that the Observer newspaper has warned that the shale gas industry is entering a period of “hibernation”.

As the rigs dry up so do the jobs. A leading recruitment agency said last week that 21,000 jobs were lost from the US energy industry last month alone.

The oil price is beginning to affect oil companies, big and small alike:

Last month, Chevron reported a 30% fall in quarterly profits whilst Continental Resources, one of the largest frackers in the shale players in North America is cutting active rigs by 40% this year.

Oil giant Shell is reducing costs by $15bn over the next three years and recently Exxon Mobil reported a 21% slump in three-monthly profits. The BG Group has axed 15% of its global workforce over the last year.

Schlumberger, the world’s largest oilfield-services company is cutting a whopping 9,000 jobs. Not far behind is Weatherford International, another leading oilfield services provider, whose value has been cut in half in six months, which plans to cut some 5,000 to 8,000 jobs this year. The company lost $475 million in the last quarter of last year.

As the companies cut back, their plans to exploit the Arctic are now in the “deep freeze” warns the Financial Times. “We will see something of a pullback in high-cost frontiers, and the most prominent of those is the Arctic,” Andrew Latham of energy consultants Wood Mackenzie tells the paper. “I wouldn’t expect anyone else to be pushing ahead with Canada, Greenland or other parts of the Arctic until we get a recovery in the price environment.”

Statoil, Norway’s biggest energy group confirmed last week that was unlikely to drill in the Norwegian Arctic this year. Chevron recently shelved plans to drill in Canadian Arctic and numerous companies have cancelled licenses to explore around Greenland.

Just as frontier areas are in trouble, so too are more mature fields. The oil price drop is plunging the British North Sea into terminal decline.

Aberdeen, the Scottish city which services the offshore industry, which weathered the financial crisis unscathed, is heading for an economic slump and the reality of low oil prices bite.

“There is certainly an air of doom and gloom around the place these days,” oil field engineer working in the city told the British press recently.

One of the leading figures in the North Sea industry, Sir Ian Wood, is warning that 6 billion barrels of oil – which equates to a third of what is left in the area – may now be abandoned, due to the falling oil price.

CEO of oil giant BP, Bob Dudley, is candidly admitting that a third of the North Sea fields could be unprofitable with oil prices at their current levels. “The North Sea decline is inevitable,” argues Dudley, warning the industry had to be prepared for a “new phase” of lower crude oil prices which could continue for months even years.

In the region, BP is halving its exploration activity and preparing for a $4.5bn write down for its North Sea operations including “increases in expected decommissioning costs”.

Sir Ian Wood is now wanting people to start thinking the unthinkable just a year ago: The granite city of Aberdeen without oil: “I had known Aberdeen pre-oil. I won’t know Aberdeen post-oil. I will have gone, but there are generations out there who have always just taken it for granted, and who have become very, very dependent on the oil and gas industry”.