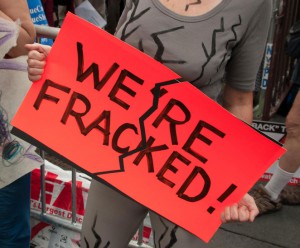 The oil industry often prides itself in pushing the boundaries of technology.

The whole fracking revolution has been driven by the industry pioneering new techniques to exploit oil and gas that was previously out of reach.

In so doing, the industry has re-written the future of the hydrocarbon era, potentially prolonging its existence by decades, maybe even longer.

But just as the American frackers were getting ahead of steam they forgot about simple supply and demand economics.

As they pumped their fracked oil they underestimated how OPEC would refuse to budge on their own crude oil output, and suddenly the world was awash with oil and the oil price plummeted.

So the frackers have a choice as they struggle with the new $50 a barrel era. They either slash production and jobs and cut back on new expensive drilling or they try and find a way to extract even more oil from their existing fracked wells.

Well it seems a mixture of both is happening. There is no doubt that US drilling rig activity is radically declining (see yesterday’s blog) and companies are shedding jobs, but the industry is also beginning to explore “re-fracking” wells. This new technique is currently known as to “pump and pray” due to the fact it is seen as so imprecise and unpredictable.

As Bloomberg reports this morning “beset by falling prices, the oil industry is looking at about 50,000 existing wells in the U.S. that may be candidates for a second wave of fracking, using techniques that didn’t exist when they were first drilled.”

The economics are simple: a new fracking well may cost as much as $8 million, while re-fracking is in the region of $2 million.

Last week, Baker Hughes, the leading oil services company, announced the release of what it called its “NextWave production rejuvenation solution”, which the company argues will help companies boost production in “existing unconventional wells that have more production to offer.”

The company argues its new technology is an alternative more precise model to the normal “pump and pray” re-fracturing process. “In today’s oil price scenario, however, operators need a more economic and consistent method of improving recovery. The NextWave production rejuvenation solution gives them that ability,” argues Hans-Christian Freitag, from Baker Hughes.

Other companies have now joined Baker Hughes in offering re-fracking technologies. So ironically the low oil price might force a new fracking revolution, just as people hoped it might curtail the existing one.

As Bloomberg points out: “While fewer new wells would seem to mean less total fracking, the re-fracking phenomenon means there won’t be as big a reduction as some had expected.”

But re-fracking is complicated and seen as more difficult than fracking itself as new fracking fluid has to be pumped down old infrastructure with the intention of trying to re-frack only certain sections of the old well.

Pouring new chemicals under new pressures down old infrastrucure brings with it its own set of problems. This means that as the industry pioneers its “pump and pray” techniques the risks to communities, to the environment and to our drinking water will not dimish, but will only grow.