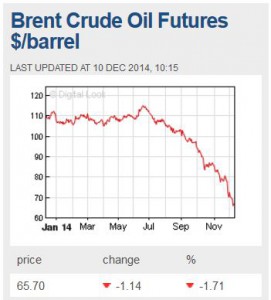 The US shale industry faces a Darwinian struggle over the next few months as only the fittest producers will survive as the price of crude plunges to $50 a barrel, the Bank of America has warned.

And even $50 a barrel may be optimistic, according to Iranian OPEC officials who are warning that crude could fall further to $40 a barrel, and the investment bank Morgan Stanley saying it could even plummet below $40 to $35 a barrel.

The Bank of America is also warning that due to OPEC’s failure to stabilise prices at its last meeting, the once all-powerful cartel is “effectively dissolved”, with the bank’s commodity boss warning that “the consequences are profound and long-lasting”.

And nowhere will those consequences be more profoundly felt than in the North American shale producers and Canadian tar sands industry.

The statistics outlined by the bank are already stark.  At least 15 per cent of US shale producers are losing money at current prices, but over half will be in deep trouble if US crude falls below $55 a barrel, which is exactly where crude oil is headed.

Even the big boys are not immune: On Monday, America’s largest exploration and production company, ConocoPhillips, became the first major company to announce it was slashing capital spending by 20 per cent next year to $13.5bn and was shelving some North American shale plays.

It is widely expected that more companies will follow their move.

And the falling oil price has also exposed a problem at the heart of the fracking industry. Fracked shale wells peak much sooner than conventional wells and so more wells have to be drilled, which means that the shale industry is much more vulnerable to oil price falls than conventional drilling as the costs are higher.

Allen Gilmer, the chief executive of the consultancy, Drillinginfo’s, tells the FT: “Because production from shale wells comes on fast and drops off fast, their economics are more exposed to short-term prices.”

Yesterday I blogged how banks are looking to make profits on the tar sands debt. The same will be true of the fracking industry.

Whereas some of the larger companies may have debt levels which are manageable, some of the smaller players such as Laredo Petroleum, SandRidge Energy and Range Resources would have debts about four times their year’s earnings before interest, tax, depreciation and amortisation.

This kind of debt level would be unsustainable if prices remained low.

And let’s not forget that many countries were hoping to replicate America’s shale boom. Russia, China, Australia, Mexico, Argentina and the UK were all hoping for a fracking revolution.

But the oil price collapse could well put pay to that.

According to Michiel Soeting, chairman of energy and natural resources at the accountancy firm KPMG, a prolonged slump could be “a nail in the coffin” for some shale projects outside North America.

It looks like it will end the fracking ambitions of many companies inside the US too.