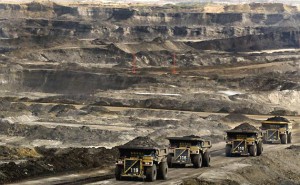 The message from the markets for the North American oil industry is summed up in four simple words by the Financial Times today: “No respite for oil.”

Yesterday Brent crude fell another 1.2 per cent to $65.4 per barrel as OPEC continued to pump oil into the market in the hope that the price slump “will drive US shale to the wall”.

Investment bank Morgan Stanley is now warning that the market risks becoming unbalanced unless OPEC intervenes by cutting production, which is unlikely to happen, at least in the short term.

It is not just US oil stocks that are taking a severe pounding. Conventional thinking is that the tar sands need about $85 a barrel to make a profit – some $20 more than the current price.

And to add to their worries, Canadian tar sands stocks tumbled yesterday, their plight compounded by an unexpected drop in Chinese imports of crude.

Shares in the tar sands producer, MEG Energy, plummeted 13 per cent after it said it was being forced to slash capital spending by a third.

Canadian Oil Sands Ltd is lowering its dividend by 42 percent, whereas Canada’s largest producer of tar sands, Canadian Natural Resources has set aside C$2 billion to potentially remove from its budget if prices remain depressed.

And now investors are moving into the kill. Bloomberg Businessweek carries an interesting article where investors are targeting the debt-laden tar sands industry and basically betting that the price of crude will go down, forcing the value of tar sands stock further down too and the companies to default on their debt.

One banker tells Bloomberg that the “surest way to profit from the debt of energy exploration and production companies in Canada’s oil-sands region is if they don’t pay it back.”

The banker Marc-Andre Gaudreau, who manages billions for the Bank of Nova Scotia is “shorting” on tar sands bonds – basically betting that value of the company will fall and in the hope of repurchasing the asset at a lower price.

Other bankers agree. “A short on some of these things, if that’s your view that the commodity is going to stay lower, certainly makes sense,” Sonny Mottahed, chief executive officer of a Calgary-based private merchant banking firm tells Bloomberg.

The falling oil price has already had an impact. Southern Pacific, with C$432 million of bonds, admitted last week it did not have enough cash to pay interest payments. It is considering selling all or a portion of its assets.

The problem for the industry is that the more investors target them, the more trouble they will be in.

It is worth remembering that this is bad news for Canada as a whole too. Oil production is four times more important to Canada than the U.S. economy.

And by the latest falls in the oil price, there will be no let up soon as the sharks circle for the kill on the badly wounded tar sands industry.