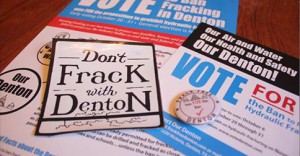 Rick Berman — the Big Oil henchman once called “Dr. Evil” by CBS’s 60 Minutes — was recently caught on tape instructing oil industry executives that they can either “win ugly or lose pretty.”

Last night, the climate justice movement did the opposite in a precious few places: we won pretty.

Where we played their game — a game of big money, of trying to work (albeit for the greater good) within our broken political system — by and large, we lost.

But, where we played our game — a game of communities rising up, of organizing, of using facts to guide us, of running straight at our progressive values and being unashamed of them — we won. And those wins were beautiful.

Take Richmond, California, in the shadow of the huge Chevron refinery. Chevron poured tanker trucks worth of money into local campaigns for Mayor and City Council in this relatively small city. Over $3 million by last count….and they lost. They lost to progressive champions who stood up to the big money, whose volunteer-led campaigns were full of organizers who have been organizing against Chevron for years. They looked the beast in the eye and they said no. You’re not buying our town this time. They put forward a vision of a new future for Richmond and this country, and they won.

Take Denton, Texas, the birthplace of fracking. Grassroots pressure has been building for years against the oil industry there in the belly of the beast. They’ve stood up against the building of the southern leg of the Keystone pipeline when many had lost hope. They’ve organized their neighbors and educated their community about the dangers of continued fossil fuel use and the ever-scarier methods of extraction. And they won a ban on fracking. In Texas. In the town where fracking itself was basically invented. Similar scenes played out in San Benito County and Mendocino in California and in Athens, Ohio…all in the face of buckets of oil money trying to buy votes.

And then there’s Omaha, Nebraska — Lee Terry’s soon-to-be-former district. The fight against Keystone XL in the Sandhills and ranchlands of Nebraska has galvanized a new generation of pipeline fighters, of community leaders, of farmers and Native Americans coming together in a new coalition to push not just for the protection of their land but for a brighter energy future for all of us. And that movement could be seen in full force in the home of Keystone XL’s biggest cheerleader in Congress in recent weeks. Despite millions in oil money, Lee Terry was defeated. In the heart of a Red State on the reddest of nights, Omaha went the other way.

Before I went to sleep on election night, I shared these thoughts with my friends:

Six weeks ago 400,000 concerned citizens filled the streets of New York demanding climate justice. Hope filled my heart, and it felt like the tide was turning. Today’s a setback, but those 400,000 friends haven’t disappeared. They were in Denton today, and San Benito, and Richmond, and Omaha. That’s what I’m going to sleep thinking about.

I’ll never forget the beauty of the crowd on September 21st at the People’s Climate March in New York City. It was a movement we’d all longed to see, finally out in force, waking up the world and saying the time is now for change. It included folks from Richmond, and Denton, and Omaha. And it put indigenous leaders, frontline communities, and the young leaders of our movement out front.  And it was beautiful.

The communities that won last night won beautifully, too. They led with their values, they worked with their communities, and they stood up and said no. Their wins aren’t wins just for their communities — they are wins for all of us pushing back against the fossil fuel industry and for a climate safe future. They are bright spots in an otherwise dim night.

Someone I know asked “Where’s our bench?” in the wake of the many defeats on Tuesday night. Where’s the next generation of progressive leaders who should be encouraged to stand up, take charge, and turn this ship around?

The answer’s obvious. It’s at the grassroots in towns facing the fossil fuel behemoth head on. It’s in communities standing up to Big Oil, Gas and Coal, looking them straight in the eye, and saying NO. “Not in my town, not in my state, not in my country.”

And we know we can win. The anti-tar sands campaign has stopped projects, cost the industry billions in lost revenue, and kept tremendous amounts of carbon from entering our atmosphere. Communities across the country have made new coal plants nearly a thing of the past. Fracking bans may be the next wave. Communities have risen up before and have won, beautifully.

But don’t be fooled: This is a war, and winning pretty doesn’t mean playing soft.

The world’s most notorious climate denier will now run the U.S. Senate’s environment committee. A Big Oil booster from Alaska will chair the Senate’s energy policy proceedings. Mitch McConnell, the presumed leader of the Senate, has taken millions from the fossil fuel industry and is sure to bend to their demands.

And you can rest assured these folks aren’t looking for compromise. You can be sure they’re not looking to cut a deal. They’re reaching for the jugular of American democracy with one hand while accepting dirty cash with the other.

Approval of Keystone XL won’t be “traded” for some progressive victory. Weakened power plant rules won’t lead to less demand from this Congress for dangerous oil and gas drilling or more investment in renewables from the oil soaked Congress. They have no interest in compromise and will stop at nothing to make sure their industry sponsors get their way.

Our fight just got a whole lot harder.

So what I take from the 2014 election is this: Don’t back down. Don’t run to the (imaginary) middle. Don’t apologize for wanting a just, sustainable future for the generations to come and an end to the dirty economy and broken political system we have today. Don’t court that big money we all know corrupts the system and don’t pretend fossil fuels have a real future in a safe new world.

Don’t play their game. Play ours. When we do that, we win.