It was huge. At least double the size anyone imagined. So big people got turned away before it ended. So long it spanned from horizon to horizon. It was more crowded than anything we climate activists had ever seen, more people coming together than many activists have seen for decades. It was masses upon masses of people shutting down Manhattan, blocking traffic, making noise—and silence—and noise again. It was huge.

But the People’s Climate March was small too. So very, very, importantly small. It was a day of huge roars but also small whispers, small moments and momentary glimpses of a beautiful future. Seconds-long reminders that we’re not alone, that we’re in this together, that the world is small and big and diverse and unified all at the same time.

It was that all-staff meeting two days before the march full of tired, weary organizers who went around the room and shared how they were feeling…and despite zero sleep, constant phone calls, hours pounding the pavement, and heavy lifting of all sorts, not a single one belied their exhaustion. “Fired up.” “Excited.” “Pumped.” “Confident.” “Happy.”

Tired bodies full of amped up souls sensing something big. 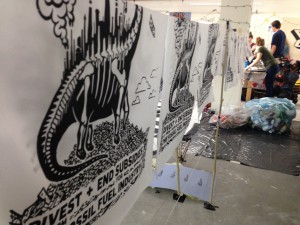 It was the buzz of Mayday, the art space that witnessed countless moments of beauty, new artists emerging, tenured artful activists getting their due. It was the sound of buzz saws, the whisks of brushes, the footsteps on cut up cardboard, the “oohs” and “ahhs” as a narrative of resistance and struggle that would shape the march for everyone was slowly unveiled.

It was the “Hi, I’m Jane from the People’s Climate March. We’re looking forward to seeing you on September 21st…” that echoed thousands of times through the organizing center high above Grand Central station as volunteers phone banked throughout the days and nights.

It was the day before the march in a hot conference room making final plans where labor activists and climate justice leaders and local warriors and organizers from afar shared hugs and excitement and hesitantly growing confidence that, hey, this thing could be bigger than we thought.

It was riding the subway at 5:30am on that Sunday morning to get to the Upper West Side of Manhattan, and being joined by march volunteers on my train, raring to go.

It was how my mom, a seasoned activist, got swept up in the crowd, teary-eyed and heart full of pride, demanding a button from her son because she didn’t want to be left out.

It was sitting on the sidewalk taking it all in, knowing there wasn’t any more we could do that day…this crowd had a life of its own and it was time to watch it shine. 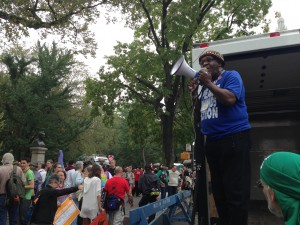 It was working with my new hero, Jim, to convince a truck driver to let us use his tailgate as an impromptu stage on Central Park West, and then urging the crowd to gather around. It was hearing him say, “This is organizing, folks” and knowing he’d been doing it for years.

It was spotting a friend hanging to a telephone pole taking photos, and that other one with a bullhorn to her mouth leading a cheer. It was that colleague whose text I couldn’t respond to because the sheer size of the march had broken the cell phone towers, and also the colleagues from across the world I bumped into in the streets.

It was that moment towards the end of the route when I saw a new friend who had finished marching but came back to cheer from the sidewalk because she couldn’t get enough. There she stood along 42nd street waving and beaming with joy, and as we caught each other’s glances, she screamed, “David! We did it!” and tears started to well in her eyes, and mine too.

It was celebrating on Sunday night on an unlikely rooftop near Times Square, but going home early to wake up and do it all over again. It was that blissfully weary Monday morning traveling to #FloodWallStreet to march with thousands again, but this time also to sit in too. To occupy the crossroads of the climate profiteers, to show our power through numbers but also brave and bold commitment.

It was singing. It was chanting. It was smiles and determined eyes and stomping feet and clapping hands.
To me, September 2014 is about stories. It’s about those moments that tell you the world is changing. It’s about that shiver I get down my spine and that I know travels through so many more.

The march was four miles long, but the road ahead is far longer. There are many lessons to learn and many things that could have been done better in the organizing of the People’s Climate March (and #FloodWallStreet). And yet there’s so much to be proud of and to build from.

I know I’ll continue for some time to post photos and recount stories about how big and vibrant and diverse and absolutely overwhelming the crowds were those days in Manhattan. But it’s the little stories that will be retold for years by proud organizers, hopeful parents, newly inaugurated activists, students and elders, toddlers and laborers.

It’s those seconds in time, when you look around and see you’re not alone, that matter. It’s a realization that this movement has always been this big, we just didn’t know it yet.

It is these small moments, these cherished moments, that I will take forward.

And in these moments, I see hope.