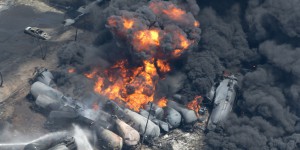 Last Sunday was a grim and painful anniversary for the people of Lac-Mégantic in Quebec.

It was a year ago that a crude by rail train, which was carrying highly volatile crude from America’s Bakken fracking fields, derailed and exploded, effectively incinerating 47 people.

To mark the anniversary, local residents and friends and family of the victims undertook a ‘silent march’ in the early hours on Sunday.

A year on, and the brutal scars of the devastating explosion are still all too evident. The crash site remains off-limits as decontamination work is still slowly progressing.

In the year since the disaster, the questions about rail safety have only increased as the amount of crude by rail shipments have grown.  “You would think that the 47 deaths in Lac-Mégantic would bring about big changes in rail safety,” said Keith Steward, a campaigner with Greenpeace Canada. “But the federal government – the only level of government that can regulate what moves on rail lines – has treated this primarily as a public relations problem rather than a public safety problem.”

The situation across the border in America is not much better. As any regular reader of this blog will know, in the year since the disaster, there have been a string of accidents of crude by rail trains across North America.  For more go here, here, here, here, here and here.

So to mark the Lac-Mégantic Anniversary, Oil Change International and other environmental groups have organised a week of action to challenge the crude by rail industry. A designated website has been set up – go here.

As the site says: “Lac-Megantic’s struggle is a grim reminder to us all: Big oil will stop at nothing to extract, transport, and burn every drop of oil in the ground. No matter the risk, no matter the cost to public health, safety, and the climate, the oil industry will jump at every opportunity to profit.”

The industry continues to expand crude by rail at an excessive speed. As Steve Horn pointed out yesterday, newly released industry data, reveals that crude by rail is moving across North America at record levels.   Mid-point this year in the US, nearly 20 per cent more tank cars were on the rail tracks carrying petroleum and/or petroleum products than last year, the figures reveal.

Despite the growing number of crude trains and the high volatility of the Bakken crude, the scant regard the industry has shown towards safety was explored in a great article in the Wall Street Journal yesterday.

The Journal reports how: “When energy companies started extracting oil from shale formations in South Texas a few years ago, they invested hundreds of millions of dollars to make the volatile crude safer to handle.

In North Dakota’s Bakken Shale oil field, the situation is very different: “nobody installed the necessary equipment”, reports the Journal. “The result is that the second-fastest growing source of crude in the U.S. is producing oil that pipelines often would reject as too dangerous to transport.”

And the Journal investigation reveals one shocking statistic regarding the use of stabilizers, which can be used to make the crude less volatile: “Only one stabilizer, which can remove the most volatile gases before transport, has been built in North Dakota”, says the paper. And here comes the most shocking part: the stabilizer has not even begun operating.

So the industry is transporting crude by rail, knowing that a crucial safety step, which could make the crude by rail trains, is missing.

The government seems negligent too. Currently it does not require the industry to use stabilizers, although it is believed to be actively exploring the issue with the industry.

Although the use of stabilizers is not a panacea for crude by rail safety, it goes without saying that if stabilizers were used, the costs to the industry would rise, and the pace of development of the Bakken crude would slow, but the transportation of volatile crude would be safer.

The awkward question for the authorities and the industry though is that if the Bakken crude had been stabilized before transporting would the disaster at Lac- Mégantic, and all the subsequent accidents, been so bad?

Although we will never know for sure, the chances are that the answer is “no”.