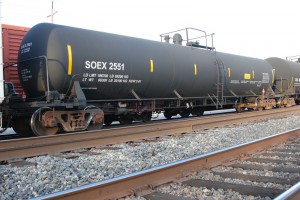 This is getting embarrassing. Another month, another crude by rail accident in the US. Yesterday a 120-car train carrying tar sands oil derailed in western Pennsylvania.

Early reports are that some twenty one cars came off the rails leading to some 3000 to 4000 gallons of oil to be spilled.

Luckily, there are no reports of injuries as the train derailed by the Kiskiminetas River in the town of Vandergrift.

The noise of the accident, where the train hit local buildings, was described by one local resident as “like a big truck hitting something, but different.”

The latest mishap adds to the long list of recent accidents of crude by rail trains across North America, which have renewed fears over safety, especially over the antiquated Dot 111 cars. It is unclear at the moment what kind of cars were involved in this latest accident.

Yesterday’s disaster comes less than a month after a train carrying crude nearly toppled over a bridge in Philadelphia. After that incident, John Hanger, the local Democratic candidate for governor, who is a former state environment secretary, said “We came within a hair’s breadth of a calamity”.

As I have previously pointed out, we are now seeing monthly crude by rail accidents occurring across North America:

Last December, a crude by rail train exploded in North Dakkota, spilling over 400,000 gallons of oil.

The month before a crude by oil train derailed and exploded in Alabama, spilling some 750,000 gallons of crude. Last July a derailment in Lac-Megantic, Canada, left 47 people dead and caused widespread devastation in the town.

Ironically this latest accident occurred just as there was a Senate hearing concerning the safety of transporting crude by rail was due to occur in Washington, before being postponed due to the weather.

In January, the crude by rail industry was given a month to draw up new plans that will limit the increasing number of accidents.

It better act quickly as the amount of crude by rail is set to soar. As Lorne Stockman pointed out on the blog last month: “Crude-by-rail in the US and Canada is around 1 million barrels per day right now, and we have had 4 major accidents all with large explosions in the last 6 months, one of which with major loss of life.”

He went on to add: “10 years from now we could be seeing over four times that much crude transported by rail throughout the US and Canada, some 4.5 million barrels per day, according to this estimate. Are we okay with that North America?”

After yesterday’s accident there will be even less people comfortable with that idea.