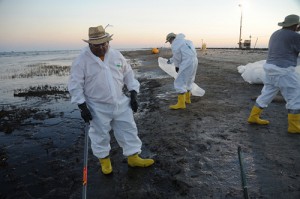 When BP’s Deepwater Horizon oil rig exploded back in April 2010, a small group of scientists and activists urged extreme caution about the best way to respond to the unfolding environmental disaster.

The authorities would have been wise to listen to them, because they were the veterans of the Exxon Valdez spill that occurred in Alaska in 1989.

At the height of the Exxon spill, some eleven thousand workers were employed to clean up the black crude from the beautiful coastline of Prince William Sound. As many species – from wales, to ducks and fish were decimated – the ecological devastation caused by the spill rightly made news across the globe.

But there was a story that passed largely unnoticed. The clean-up workers started to get sick. Not just one or two, but they started to get seriously ill in their hundreds and thousands. They had what was nicknamed the “Valdez crud”, a term used by doctors to describe symptoms including headaches, sore throats, sinus infections and coughs.

For many their symptoms got worse, even when they stopped working on the clean-up. An unknown number died.

One of the veterans of the Exxon Valdez disaster was toxicologist, Dr. Riki Ott. It was Ott who had ironically warned the night before the disaster that it was only a matter of time before a calamity struck. Her warning came true hours later, when the Exxon Valdez ploughed into Bligh Reef spilling at least eleven millions gallons of oil. Its captain was drunk. The rules and regulations meant to prevent a disaster were by that stage a joke.

In the years after the disaster, as more clean up workers got sick, they sued Exxon. Ott started counting the numbers. “I found Exxon’s clinical data, showing that 6,722 workers reported respiratory distress. That is more than one in two clean-up workers. That is like an epidemic,” she recalls. She also believes that that Exxon “covered-up mass chemical poisoning of the clean-up workers”.

At the end her three-year investigation, Ott concluded that “there are, unquestionably and undeniably, people who have died, and people who are suffering from chronic health problems stemming from wrongful exposure during the clean-up.”

What alarmed Ott was it was not just the oil that made people sick, but the chemicals used in the clean-up too. In fact, some people believe the chemicals caused more health problems than the oil itself.

So when the Deepwater disaster happened, Riki Ott and others urged extreme caution, especially in relation to the chemicals that BP used on the spill, and one of those was Corexit.

The ten page sheets are produced by NALCO, the chemical company that produces Corexit reported that: “Prolonged and / or repeated exposure through inhalation or extensive skin contact” with the chemical “may result in damage to the blood and kidneys”.

On this blog, back in 2010, I pointed out that, despite Corexit’s widespread use “No toxicity studies have been conducted on this product”.

This blog also pointed out that Corexit contains 2-Butoxyethanol, the same hazardous chemical that was present in INIPOL EAP 22, the main dispersant used by Exxon in the aftermath of the Exxon Valdez.

A Material Safety Data Sheet for INIPOL, produced by Exxon in 1989 noted that components of this product 2-Butoxyethanol “may be absorbed through the skin and could produce blood and kidney damage”.

These warnings were dismissed by BP and the US authorities at the time.  In total nearly two millions gallons of Corexit were used to try and disperse the oil.  The adage: out of site, out of mind was at play.

The workers were also reassured that everything was fine. One BP worker was told that the oil sheen on their boots “was safe as Dawn dishwashing liquid”. Within days she was coughing up blood, suffering constant headaches and lost her voice. She soon started getting unstoppable muscle spasms, memory loss, swollen joints and itchy skin.

She would become one of an unknown number of victims of the BP spill, just like the cleanup workers from Alaska years before.

Once again the oil industry was at fault.

A great article from earlier this year into the clean up workers reported how: “Not only did BP fail to inform workers of the potential hazards of Corexit and to provide them with safety training and protective gear, according to interviews with dozens of cleanup workers, the company also allegedly threatened to fire workers who complained about the lack of respirators and protective clothing.”

The unmistakable conclusion is that the oil industry was once again playing fast and loose with people’s lives.

The investigators from the University Cancer and Diagnostic Centers in Houston, Texas looked at a total of 247 people between January 2010 and November 2012, with 117 subjects identified as exposed to the oil spill and dispersants by participating in the cleanup over the duration of three months

Their findings suggest that oil spill cleanup workers are at risk for developing liver, kidney  or blood-related disorders, compared to the control group.

They were also found to be at a higher risk of developing cancer, leukaemia and a host of other illnesses.

The participants also reported the same symptoms that those who had worked on the Exxon Valdez spill had, such as headaches, shortness of breath, skin rash, cough, dizzy spells, fatigue, painful joints, night sweats, and chest pain.

“The health complaints reported by those involved in oil cleanup operations are consistent with the previously reported studies on major oil spills. However, the prevalence of symptoms appears to be higher in the present study compared with the earlier findings of other investigators,” argue the scientists Dr. D’Andrea and Dr. Reddy.

As BP’s workers slowly get sick, develop cancer and die, the most unpalatable and outrageous fact is that all this suffering and injury was preventable.

The oil industry knew how toxic crude oil was and knew how toxic Corexit was. In the days after the disaster, The Exxon Valdez veterans, like Riki Ott,  pleaded that BP and the authorities learn from the lesson from Alaska.

But their warnings were tragically ignored.