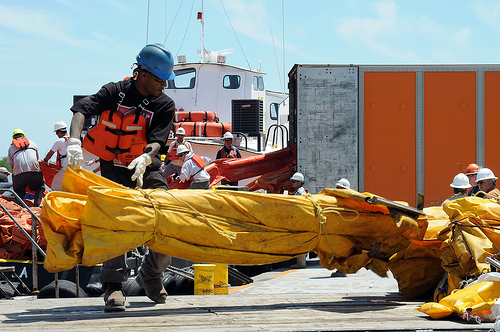 Whilst the media have been focussing on the untested nature of the 4 story dome or “cofferdam” that is going to be lowered over BP’s spill at the sea bed, its use of dispersant is also coming under scrutiny.

Alarmingly, according to the dispersant manufacturer, no toxicity tests have been conducted on this product.

The New York Times reports this morning that BP has sprayed some 160,000 gallons of chemical dispersant on the water’s surface and pumped an additional 6,000 gallons directly onto the leak, a mile beneath the surface.

When he gave his interview to the BBC the other day, Tony Hayward the CEO of BP was at pains to stress how the use of dispersants at such depths had never been tried before.

What he did not mention was that these dispersants are highly toxic and the ecological impact of doing it is completely unknown.

The NYT reports that the main dispersants applied so far, from a product line called Corexit, are so toxic they had their approval rescinded in Britain a decade ago “because laboratory tests found them harmful to sea life that inhabits rocky shores, like limpets”.

I should point out that, whilst the dispersant failed the “limpet test” it passed an offshore safety test.

The Safety Data Sheet for BP’s “Dispersant type 1”, Corexit 9500 and its “dispersant type 2” Corexit  EC9527A have now been posted on line here.

The ten page sheets are produced by NALCO, the chemical company that produces Corexit. The data sheets show that these products are not benign. The “Human Health Hazards” are said to be “Chronic” for EC9527A.

“Prolonged and / or repeated exposure through inhalation or extensive skin contact” with the chemical “may result in damage to the blood and kidneys”.

However what the NYT did not say is that the data sheets contain two alarming statements: for toxicological information it says, for both dispersants, “No toxicity studies have been conducted on this product”.

Considering that these dispersants are being used in vast quantities, this is quite alarming.

But it gets worse.

For Corexit EC9527A under “Ecological Information” and “Ecotoxicological Effects” it once again states that “No toxicity studies have been conducted on this product”.

So if NALCO’s own safety sheets are to be believed, then basic safety toxicity tests have not been done.

And it gets worse again.

Corexit EC9527A contains 2-Butoxyethanol, the same hazardous chemical that was present in INIPOL EAP 22, the main dispersant used by Exxon in the aftermath of the Exxon Valdez.

A Material Safety Data Sheet for INIPOL produced by Exxon in 1989 noted that components of this product 2-Butoxyethanol “may be absorbed through the skin and could produce blood and kidney damage”.

Effects of overexposure could be highly serious. “Inhalation of high vapour concentrations may have results ranging from dizziness, headache, and respiratory irritation to unconsciousness and possibly death”.

On Environmental Information, the Exxon Data Sheet says “keep product out of sewers and watercourses”.

If this product is so hazardous that it should be kept out of watercourses, what is BP doing spraying thousands of gallons on the ocean?

Another dispersant used on the Exxon Valdez, Corexit 9580M2, even came in barrels with labels that warned “toxic to fish.”

And BP – for the first time ever – is pumping thousands of tonnes of dispersant a mile under the surface.

No one knows what the damage will be.

One thing is sure: BP has now spread far more dispersant than Exxon ever did in the aftermath of the Exxon Valdez.

Just because the US regulatory authorities allow their use, it does not mean they think they are safe either.

In her book on the Exxon Valdez disaster, the leading marine biologist Dr Riki Ott noted about dispersants.

“Before considering the human health effects of dispersants, it is instructive to review how industry and government handle dispersant use from a liability perspective.”

Dr. Ott notes that EPA specifically states: “The listing of a product on the Schedule does not constitute approval of the product.”

Speaking about the use of dispersants today, Dr Ott said: “This is like treating cancer with something you don’t know is going to work or not, or you don’t know whether the cure is worse than the harm. You don’t know anything.”