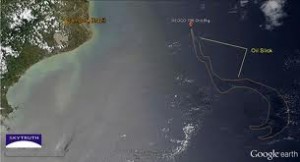 Chevron is at the center of a scandal over the oil spill in the offshore Campos Basin Frade field about 230 miles from the coast of northeast Rio de Janeiro. Originally the company said that the spill was natural seepage from the field. Well, no, it appears it was not.

The scandal began to unravel on November 8 when Chevron Brasil Petroleo Ltd. first reported the spill to Brazilian officials. On November 10, the oil giant released a statement that it was “aware of an oil sheen located between the Frade and Roncador fields in the Campos Basin and that “an inspection of the Frade facility found that production activities were unrelated to the sheen and production is continuing.”

Brazilian President Dilma Rousseff demanded a full investigation and the Brazilian national petroleum agency ANP asked for and approved a plan to contain the spill. Brazilian authorities sent in technicians and opened investigations. Yesterday ANP announced that efforts to cement closed oil well 9FR-50DP-RJS were beginning, could take an estimated 20 hours to dry, and essentially kill the well.

Brazilian Minister of Mines and Energy Edison Lobão told the newspaper Estadao that the ANP would deepen its investigation on the Chevron spill. “If Chevron is not assuming its role, it will be more severely punished,” he said.

In addition to the ANP investigation, federal police in Rio de Janeiro yesterday announced an investigation into whether an environmental pollution crime has occurred in the Campos Basin. Fábio Scliar, chief of the federal police environment and natural patrimony division, told Brazil’s newspaper Folha de Sao Paulo that Chevron had assured authorities that 18 ships were cleaning up the spill. But federal police flew over the region on Tuesday and found only one clean up vessel on site.

“Initially, the reports do not correspond with the reality of the facts,” Scliar told Folha. “I want to understand what is occurring.”

We all want to understand what is going on. The oil disaster that unfolded in the Gulf of Mexico when BP’s Macondo well exploded on April 20, 2010 is a stark reminder of the grave environmental risks posed by deep water oil drilling.  And Chevron’s behavior in this Frade spill, at minimum, undermines trust that Big Oil is playing it straight. (Chevron owns a 51.7 percent interest in the Frade project. The Brazilian oil giant Petrobras holds 30 percent and Frade Japao holds 18.3 percent.)

Satellite images indicate that the spill is originating from the drilling location and extending over 2,379 square kilometers. Sky Truth estimates that at “1 micron thickness, that’s a volume of 628,000 gallons (14,954 barrels) of oil. Assuming the spill began midday on November 8 (24 hours before we first observe it on satellite imagery), we estimate a spill rate of at least 157,000 gallons (3,738 barrels) per day.  That’s more than 10 times larger than Chevron’s estimate of 330 barrels per day.”

This spill is of particular concern given the billions of dollars being invested to try and tap Brazil’s ultra-deep-water oil fields, called pre-sal. The Frade field, at a depth of approximately 1,120 meters (3,700 ft) is shallower than the pre-sal reserves in the Santos Basin, which are beneath approximately 2,000 meters (6,600 ft) of water and then 5,000 meters (16,000 ft) of salt, sand and rocks. The BP Macondo well explosion occurred at approximately 1,500 meter (5000 ft) depth—and oil gushed into the Gulf for months before BP was able to contain it.

One must shudder to think of the potential environmental disasters that lie in store should Brazil continue its headlong rush into ultra-deep water drilling. And given that secrecy and confusion appear to be Big Oil’s tools of the trade, we are wise to scrutinize this industry’s activities.

Financial markets at least appear to be waking up to the risks. Chevron’s shares fell 2.7 percent on Tuesday as news hit the market that the spill could be 10 times larger than the 200-300 barrels a day originally reported.