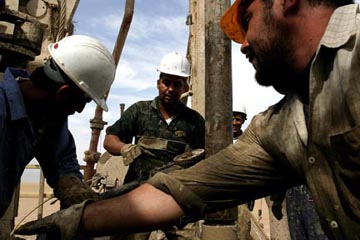 UPDATE 5/14 – the strike deadline has now been moved until Thursday May 17th. Take Action to Urge the US Congress to drop the Iraqi Oil Law “Benchmark”

Monday May 14th – The Iraqi Federation of Oil Unions has postponed its’ strike for this week.

A 7-member delegation from the IFOU will meet with Prime Minister Nouri
al Maliki in Baghdad tomorrow to continue negotiations.

The delegation is set to return on Thursday when, if negotiations have
failed to bear fruit, a new strike date will be set.

Union President Hassan Jumaa said that unions in the Northern Oil
Company in Kirkuk, and the Mechanics and Engineers Union and Dora
Refinery Union in Baghdad are ready to take solidarity strike action
with the IFOU. ‘Members were balloted and have decided to take action
with us if we strike’.

The Union, representing 26,000 workers, has held three previous strikes
since 2003, each time stopping exports, for up to two days at a time.

The Iraqi government has declared strike action by the Union as illegal.

Speaking from Basra today, union President Hassan Jumaa Awad said, ‘We
are working within the law. We are not afraid of arrest and imprisonment
because we know we have both the legal and the moral right in this
dispute. We are asking all unions and organisations which believe in
human rights to stand with us and support us in our legitimate demands’.

The Union’s demands range from a restoration of a bonus scheme, land for
homes, approval of outstanding holidays and full time status for
temporary workers, to a long-held and reiterated demand for inclusion in
consultation over the country’s oil law. See www.basraoilunion.org for
more details.

The current draft of the Oil law proposes giving multinational companies
the primary role in developing Iraq’s huge untapped oilfields, under
contracts lasting up to 30 years. Oil production in Iraq, like in most
of the Middle East, has been in the public sector since the 1970s.

The Union recently addressed the US Congress and European Parliaments in
a letter asking them not to link withdrawal with the passing of the oil
law. In it Hassan Jumaa Awad said:

‘We ask our friends not to link withdrawal with the oil law, especially
since the USA claimed that it came to Iraq as a liberator and not in
order to control Iraq’s resources.”

The general public in Iraq is totally convinced that Bush wants to rush
the promulgation of the oil law so as to be leaving Iraq with a victory
of sorts, because his project is failing every day and the occupation is
collapsing in all parts of Iraq.’ See here for a full translation.

The proposed strike is the culmination of 4 years of campaigning on
members’ issues involving protests, strikes and worker-lead lock-outs.

In a communiqué announcing the strike, the Union declared: ‘Our demands
for entitlements were ignored despite four years of continued promises
by ministry and government officials…throughout this period we worked to
diffuse anger and resentment and address criticism levelled by our
members who mistakenly thought of us as the ones failing to put forth
their legitimate demands…enough is enough’.

The number of death threats against union leaders has escalated since
the strike was first declared, said Hasan Jumaa Awad. “As soon as the
federation called for the strike, many of our members and officials were
physically threatened by parties active in the political process, with
the aim of thwarting the strike and undermining the message of the
strike organisers.” The Union is taking these threats seriously.
ORIGINAL POST:

Iraq’s largest oil workers’ trade union will strike tomorrow, in protest at the controversial oil law currently being considered by the Iraqi parliament. The move threatens to stop all oil exports from Iraq.

The oil law proposes giving multinational companies the primary role in developing Iraq’s huge untapped oilfields, under contracts lasting up to 30 years. Oil production in Iraq, like in most of the Middle East, has been in the public sector since the 1970s.

The Union, representing 26,000 oil workers, has held three previous
strikes since 2003, each time stopping exports, for up to two days at a
time. The announcement of the strike has spurred negotiations with the
Ministry of Oil, which are ongoing.

Imad Abdul-Hussain, Federation Deputy Chair of the IFOU said: “The
central government must be in total ownership and complete control of
production and the export of oil”. He warned against the controversial
Production Sharing Agreements favored by foreign companies, saying
other forms of co-operation with foreign companies would be acceptable
but not at the level of control and profiteering indicated in the
current Oil Law.

Federation President Hassan Jumaa Awad al Assadi said: ‘The oil law does
not represent the aspirations of the Iraqi people. It will let the
foreign oil companies into the oil sector and enact privatisation under
so called production sharing agreements. The federation calls for not
passing the oil law, because it does not serve the interests of the
Iraqi people.”

The Union is not alone in its’ condemnation of the current oil law.
Opponents of the law also include all of Iraq’s other trade unions, a
number of political parties, and a group of over 60 senior Iraqi oil
experts.

Hassan Jumaa went on to say: “The federation calls on all unions in the
world to support our demands and to put pressure on governments and the
oil companies not to enter the Iraqi oil fields.”

Union members are also demanding an improved salary structure and a
distribution of land for building homes.

Instead of the union’s participation being welcomed, leaders have been
accused of jeopardizing security and threatened with legal action.

Farouq Al-Asadi, the Federation’s Secretary said: ‘The Oil Minister
chooses to forget that the right to strike is guaranteed by the
constitution – we have chosen the legal path’.