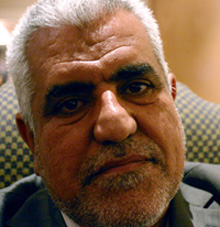 Just as the New York Times reports on billions in missing Iraqi Oil (see below), Hasan Jum’a Awwad, Head of the Iraqi Federation of Oil Unions, has urged Congress “not to link withdrawal with the oil law”:

“Peace be upon you and greetings to you all,”

“We wish to clarify certain matters relating to events in Iraq for our friends among the members of the US Congress. It is common knowledge that the occupation spared neither the old nor the young, and that Iraq is passing through the most difficult of times because all and sundry are hounding it and covet a share of its riches. We see no good reason for linking the passing of the feeble Iraqi oil law to the withdrawal of the occupation troops from Iraq.”

“Everyone knows that the oil law does not serve the Iraqi people, and that it serves Bush, his supporters and the foreign companies at the expense of the Iraqi people who have been wronged and deprived of their right to their oil despite enduring all difficulties.”

“We ask our friends not to link withdrawal with the oil law, especially since the USA claimed that it came to Iraq as a liberator and not in order to control Iraq’s resources.”

“The general public in Iraq is totally convinced that Bush wants to rush the promulgation of the oil law so as to be leaving Iraq with a victory of sorts, because his project is failing every day and the occupation is collapsing in all parts of Iraq.”

“We wish to see you take a true stance for the children of Iraq, and we always say that history will remember those who advance peace over war.”

[received via email May 12, 2007. Translation from Arabic original by Dr. Kamil Mahdi, University of Exeter]