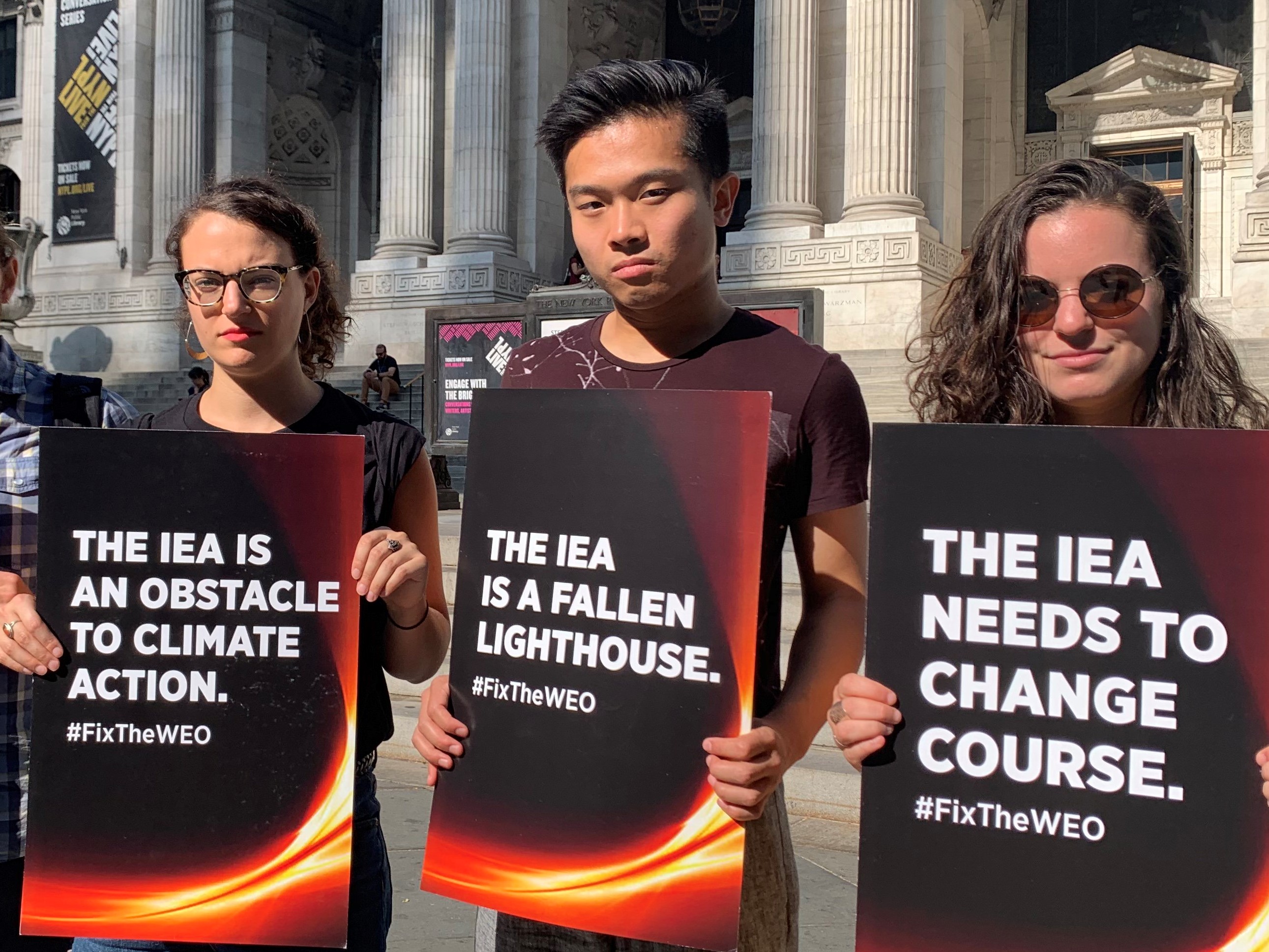 The International Energy Agency (IEA) has hinted that it may increase the level of climate ambition modelled in the 2019 edition of its influential World Energy Outlook, to be released this fall. It did so in response to escalating pressure from a broad coalition of business leaders, investors, climate scientists, and energy experts. As the world’s foremost energy modeller, the IEA has received increasing criticism for failing to adequately model what global success in meeting the Paris Agreement would look like, and for steering energy decisions in an unsafe direction.

In this post, we’ll unpack a key issue that may determine whether or not the IEA’s 2019 climate scenario equals a true course correction, or more of the same: the extent to which the IEA punts the hard work of reducing carbon to negative emissions technologies, or NETs.

First, let’s be clear about why this is important: IEA scenarios are used as guideposts for energy decisions all around the world – by governments, companies, and investors. Yet, the IEA’s annual World Energy Outlook (WEO) ignores the full ambition of the Paris Agreement and devotes most of its pages to a business-as-usual scenario that would lead to climate breakdown. If the world is to limit global warming to 1.5 degrees Celsius (°C), and avoid increasingly disastrous consequences for people and ecosystems, then energy decisions need to line up, right now, with that goal.

If you ask the IEA, or look on its website, it will tell you that its climate scenario, the Sustainable Development Scenario (SDS), is already “fully aligned with the Paris Agreement.” The IEA claims this based on its conclusion that the 2020 to 2040 emissions trajectory of the SDS fits within a range of scenarios published by the Intergovernmental Panel on Climate Change (IPCC) that would lead to between 1.7 to 1.8°C of median temperature rise in 2100.

One part of this claim is straightforward to rebut: A median temperature rise of 1.7°C in 2100 would clearly involve exceeding 1.5°C, when the Paris goals require “pursuing efforts to limit the temperature increase to 1.5 °C.” When every additional bit of warming makes the situation more dangerous, a future of 1.7°C of temperature rise does not equal the full ambition of the Paris Agreement.

In fact, in the IPCC’s 1.5°C scenario database, all of the scenarios projected to lead to 1.7 to 1.8°C of median temperature rise in 2100 – as the IEA claims the SDS would – are classified as having a 66% probability or less of limiting warming to 2°C. That sounds a lot like the IEA’s Copenhagen-era 450S scenario, which gave a 50% probability of limiting warming to 2°C. And, in fact: the “updated” SDS has a nearly identical emissions profile as the 450S.

In the case of the SDS, a lot is hidden in what remains unwritten. The IEA’s SDS scenario, as of WEO 2018, only projects the future to 2040. But what happens beyond that time frame will determine the severity of global warming. As we unpack below, when the IEA compares the SDS to IPCC scenarios – going so far as to claim it is “within the envelope of” 1.5°C scenarios – it includes the ones relying on a massive future deployment of negative emissions technologies (NETs).

The IPCC’s Special Report on 1.5°C of Global Warming clearly explains that its scenarios test and illustrate a variety of mitigation options – and cautions that not all of those options may be socially desirable, adequately equitable, technically feasible, or ultimately effective. The extent of reliance on NETs is a key difference that the IPCC highlights in contrasting scenarios; however, the IEA glosses over this nuance.

NETs is a catch-all phrase for various technologies that could remove carbon dioxide from the atmosphere, ranging from afforestation and reforestation to bioenergy with carbon capture and storage (BECCS). BECCS is a technology created within climate models, and favored by their cost-optimizing logic, but not yet proven at scale. The idea behind these technologies is to buy time. The world could phase out fossil fuels a bit more slowly and/or exceed carbon budget limits associated with a given temperature limit – if other mechanisms to suck that carbon back out of the atmosphere can be deployed at a commensurate scale.

The figure below shows that, of the four illustrative 1.5°C pathways featured in the IPCC’s Special Report on 1.5°C, the IEA’s SDS (shown in red) aligns most closely with those that rely heavily on NETs: 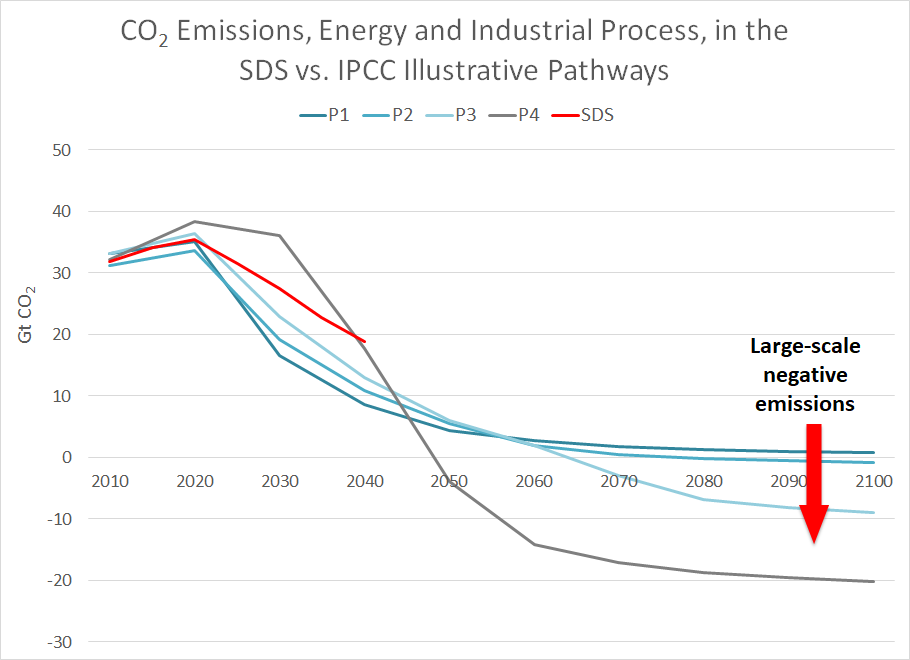 The IEA does not explicitly assume reliance on negative emissions in the SDS – there is no such column in its data tables. But if the IEA were to extend the SDS beyond 2040, the only clear way it could claim full Paris alignment is by assuming new technologies will pull hundreds of billions of tonnes of carbon dioxide out of the atmosphere in the second half of the century. In other words, the IEA relies on a hope that later actions (not part of the scenario) will compensate for the inadequacy of the SDS.

A gamble of the highest stakes

As we look towards the release of the 2019 World Energy Outlook, a key question to watch for is: Will the IEA claim the SDS aligns with a lower temperature limit by punting even more emissions reductions to NETs after 2040, or by actually accelerating the phase-out of fossil fuels?

The IPCC helpfully breaks down the huge uncertainties and risks associated with the former approach. The IEA actually did the same in WEO 2016, as we recap further below.

The IPCC Special Report on 1.5°C warns that, carbon-dioxide removal “deployed at scale is unproven and reliance on such technology is a major risk in the ability to limit warming to 1.5°C.” Scientists have identified a variety of factors that make massive reliance on NETs a risky gamble:

The IEA does not mention these constraints and uncertainties, or examine whether pathways like P3 and P4 are realistic or desirable, when it touts how the SDS lines up with IPCC scenarios. Yet, according to the IPCC, it is likely that “[Integrated Assessment Models] currently do not reflect the lower end and exceed the upper end of bioenergy and BECCS mitigation potential estimates.”

For the IEA to base its claims of Paris alignment on a similar scale of negative emissions technologies would be irresponsible. If carbon budgets are exceeded, and these technologies fail to materialize or prove effective, then humanity’s chance at stabilizing the climate at agreed to levels would be gone.

The IEA knows the risks of negative emissions

Ironically, a few years back, the IEA did a good job of warning of the risks of its SDS approach.

In WEO 2016, the IEA expressed clear doubts about the feasibility of large-scale deployment of NETs:

Such a situation is vastly removed from the realities of the current energy system, and the prospect is remote from today’s perspective.

To achieve 8 Gt of net-negative CO2 emissions […] around 3.0 million square kilometres of arable land would be required. This land area is broadly equivalent to the size of India. There are also critical questions surrounding whether or not bioenergy can be considered a CO2-neutral fuel.

In 2016, the IEA also warned of the climate gamble inherent in NETs reliance:

This would imply relying, at scale, on yet unproven technology. It would also exacerbate the likelihood of adverse physical impacts arising from climate change (which generally occur in a non-linear fashion at progressively higher temperature rises).

The subsequent WEO 2017 similarly warned that “all such technologies face severe technical, economic and resource constraints.”

Fast forward to 2018 and we find the IEA throwing precaution to the wind. WEO 2018 does not mention the risks or limitations of relying on NETs despite the IEA previously admitting the technology is “yet unproven” with remote prospects and severe constraints.

A trade-off that benefits the fossil fuel industry

What is at the root of the IEA’s implied gamble on NETs? We cannot know for sure but we do know that it is a trade-off that pleases the fossil fuel industry.

For example, in WEO 2018, the IEA asserts that, “Continued investment in oil and gas supply […] remains essential even in the Sustainable Development Scenario to 2040.” The greater assumed deployment of NETs in the second half of the century is what enables a slower projected decline of fossil fuels in the near-term, giving the IEA a basis to call for continued investment in fossil fuels.

For illustrative purposes, the table below compares the declines in fossil fuel use to 2030 in the lower-NETS P1 and P2 pathways to the SDS. With coal, gas, and total CO2 emissions, the SDS tracks far behind the rates of decline found in pathways minimizing reliance on NETs. In the case of gas, the IEA projects a 23 percent increase to 2030.

Source: IEA, IPCC / *The IEA does not include industrial process emissions in its SDS projections, so we include the industrial emissions trajectory from the IEA’s Faster Transition Scenario, which is more ambitious than the SDS, for comparison purposes.

By asserting that slow relative declines in fossil fuels are “fully Paris aligned” the IEA risks locking the world into a self-fulfilling prophecy of large-scale reliance on NETs. Such an outcome would both endanger the Paris goals and the goals of sustainable development that are also aims of the SDS.

The IPCC Special Report on 1.5°C warns, “Avoiding overshoot [of 1.5°C] and reliance on future large-scale deployment of carbon dioxide removal can only be achieved if global CO2 emissions start to decline well before 2030.”

Alternatively, “Delaying climate mitigation and adaptation responses across sectors would lead to increasingly negative impacts on land and reduce the prospect of sustainable development.”

This November, we’ll find out if the IEA has embarked on real scenario reform or not when it releases WEO 2019. A growing group of political and financial decision-makers and civil society organisations is asking the IEA to deliver a robust road map to meeting the Paris goals, including by:

Real scenario reform will require more than risky emissions accounting tricks that punt the burden and costs of reducing emissions to future generations. We’ll be watching to see both how the IEA describes the likely temperature outcome of the SDS – and what assumptions around NETs are tied up in that description.

Until it is proven that NETs can deliver at large scale, the IEA should revert to its 2016-era precautionary approach and avoid relying on them. It should show governments, investors, and businesses what it will take to meet our climate goals without them. Such an approach may cause considerable more stress for fossil fuel company executives, but it would provide a far more reliable and less risky road map for protecting people and ecosystems from climate catastrophe.