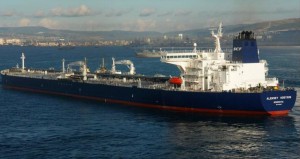 You will not have heard of the Aleksey Kosygin, but next week this obscure sounding tanker is set to make history as it becomes the first major shipment of Canadian tar sands to arrive in Europe.

According to the Responding to Climate Change website, the tanker, which is carrying  500,000 to 600,000 barrels of tar sands will arrive in Spain next week.

Although it is currently unclear how the tar sands oil arrived from Canada at the Gulf Coast, Platts is reporting the tar sands oil is being transported from the US on the tanker, along with a shipment of oil from Mexico.

The worry is that this becomes the first of many and opens up a lucrative new market for the carbon-intensive and dirty fuel.

This is just what the Canadians want. Any regular reader of this blog will know that the Canadians have undertaken one of the most extensive lobbying campaigns in recent years to undermine a key piece of climate legislation, entitled the Fuel Quality Directive (FQD).

The FQD, as it is called for short, would label tar sands as more carbon intensive than normal fossils fuels. The Canadians and the oil industry, have been trying to make sure that this does not happen.

In July 2011, working with Friends of the Earth Europe, I revealed the extent of what we called the Canadian’s “Dirty Lobby Diary.”

Since our report was published the Canadian lobbying effort continued and so did their misinformation.

Our follow up report on the Canadian lobbying efforts, Keeping their Heads in the Sands, was published in February 2013.

One of the documents quoted in the report was really important. In a briefing document for the EU Trade and Investment Sub-Committee, dated June 2012, officials from the Department responsible for action on climate change at the European Commission, noted that the percentage of tar sands being exported to Europe would increase over the coming years.

And so this has come to pass.

There will no doubt be smiles in the Canadian government that on the 29th May the Aleksey Kosygin is due to dock in the northern Spanish city of Bilbao. It will then be transported to refineries operated by the Spanish company, Repsol.

Climate campaigners are rightly concerned.  “This would totally undermine the reductions that the EU is aiming at,” Franziska Achterberg, Greenpeace EU energy and transport policy director, told RTCC.

It is still uncertain whether the European refineries will be able to process the dirty crude. “This is a test for the refining process, whether Europe can actually refine tar sands into fuel,” said Achterberg.

The Spanish company Repsol have been reportedly upgrading their refineries to take the tar sands oil, including at Bilbao where the oil is to be delivered.

Analysts believe that it is only a matter of time before more tar sands oil is delivered. Torbjørn Kjus, an oil analyst at DNB Markets, argues that refiners “wouldn’t care what the source is” and “wouldn’t think about the carbon content at all.”

As the tar sands start to arrive, the pressure grows for the EU to adopt the FQD. And the Canadians will make sure that this does not happen. Their dirty lobbying will continue.

But one thing is certain. It adds weight to the argument that the Keystone XL (KXL) pipeline is essentially an export pipeline.

As one oil industry insider wrote for the influential Platts website last week: “With Canadian crude now being exported from the Gulf Coast … the possibility that Keystone XL will be used as a highway for WCS [Western Canadian Select] exports abroad can very much be a part of the debate.”

For a long time, the oil industry scoffed at the idea that KXL was an export pipeline.  Not any more.