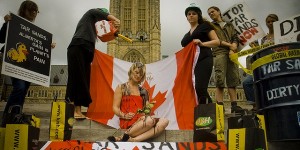 Two Albertan government ministers will be finishing their latest lobbying tours of Europe this week after a ten day PR push to undermine the EU’s flagship climate legislation, the Fuel Quality Directive.

The Province’s International and Intergovernmental Relations Minister Cal Dallas and Environment and Sustainable Resource Development Minister Diana McQueen have travelled separately to eleven European capitals over the last ten days in a trip that has cost Canadian tax-payers some C$100,000.

The latest lobby tour is part of an intense PR campaign by the Canadians to scupper the Fuel Quality Directive that stretches back to September 2009.

Over the last 2 years I have been periodically working with Friends of the Earth Europe, tracking the Canadian lobbying effort.  In July 2011 we revealed the extent of what we called their “Dirty Lobby Diary.”

Since our report was published the Canadian lobbying effort has continued. And so has the misinformation. The press release from the Albertans on the latest European tour quoted Minister Dallas as saying he supports “the intent of the FQD”. This is just not true.

The clue is elsewhere in the press release where it says the latest tour was designed to “maintain and enhance market access”. This means that the Canadians will do everything in their power to undermine the FQD and make sure that the dirty tar sands do not get discriminated against.

The Canadians are trying to persuade the Europeans that the dirty tar sands are not that dirty after all. That was their message during their whistle-stop tour of Ireland, Romania, Spain, Czech Republic, Germany, Hungary, Italy, Portugal, France, Belgium and the Netherlands

However the Canadian’s job just got a whole lot harder after two reports in the last week.

The report noted that 15 to 30 per cent of a barrel of tar sands bitumen is converted during the refining process into a coal-like solid fuel called petroleum coke or ‘petcoke’, which is later burned. Historically these emissions have not been considered, in part because sometimes they displace coal being burnt in coal fire powered stations.

But as Lorne Stockman, the author points out “Petcoke is like coal, but is in fact dirtier. Petcoke has even higher carbon emissions than already carbon-intensive coal, emitting between 5 to 10 percent more CO2 than coal per unit of energy produced. A ton of petcoke yields on average 53.6 percent more CO2 than a ton of coal. So even if petcoke did simply replace coal, which is not the case, the net emissions from whichever activity the petcoke is fueling (eg: power generation) are higher.”

So the Canadians have a Petcoke problem. They also have a carbon time bomb problem. Yesterday Greenpeace listed the tar sands as one of the top dirty energy projects that threaten the climate.  Although the message is not really new, it adds further weight to the growing evidence against the tar sands.

Greenpeace’s report went on to add that “governments don’t need to push the climate to the point of no return,” by developing the tar sands and other carbon intensive projects.

The report added: “By implementing simple policies, such as upgraded fuel economy standards or transitioning to alternative technologies such as electric cars and renewable sources of power and heating, dramatic cuts can be made in demand for oil by more than the dirty oil projects would produce.”

The Canadians have long argued that they are leaders in climate change action, so why don’t they scale back the tar sands and start investing in clean energy instead?

Ah, if only life was that simple.