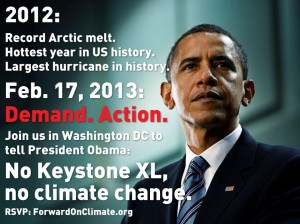 This Sunday the stage is set for what could be one of the defining battles regarding climate change in this political era as thousands of Americans head for DC for the largest climate rally ever. Period.

At issue is forcing President Obama to take a lead on climate change. As the campaign group, 350.org point out “The first step to putting our country on the path to addressing the climate crisis is for President Obama to reject the Keystone XL tar sands pipeline.”

KXL is the thorn in the backside of the Obama Administration that refuses to go away. And the longer Obama sits on the decision, the more painful it gets.

The Canadians are lobbying hard on this both in Europe and Washington. New US secretary of state, John Kerry, met with Canada’s foreign minister, John Baird on Friday, where the consensus is that the KXL was discussed. “I have no doubt that subject will come up, as it always does with our Canadian counterparts,” a state department spokeswoman, Victoria Nuland, told reporters before the meeting.

At the press conference afterwards Kerry refused to be drawn on KXL apart from saying the decision would be “fair and transparent, accountable, and we hope that we will be in a position to make an announcement in the near term.”

Baird and his colleagues may be telling Kerry and Co that this is a pipeline that secures energy security for the US. It is an energy alliance between two good old friends.

So lets get this straight. KXL is an export pipeline. It has nothing to do with American’s energy security. It is about exporting Canada’s dirty carbon to the world. Canada’s dirty energy just happens to pass through the US on its way.

It was back in September 2011 that Oil Change International first exposed what KXL was really for in a report called Exporting Energy Security: “The Keystone XL pipeline is an export pipe¬line. The Gulf Coast refiners at the end of the pipeline’s route are focused on expanding exports, and the nature of the tar sands crude Keystone XL delivers enhances their capacity to do so.”

As an regular reader of this blog will know the Canadians have been lobbying hard not just in Washington, but also in Europe. I have been working with Friends of the Earth Europe on and off for the last eighteen months tracking the lobbying effort of the Canadians in Brussels.

Our first report was published in the summer of 2011, called Dirty Lobby Dairy, which revealed that there had been a huge number of lobbying events – over 110 – organised by the Canadians on tar sands and the EU’s Fuel Quality Directive between September 2009 and mid-2011.

Our follow up report, Keeping their Heads in the Sands, was published last week.  One of the documents quoted in the report is really important. In a briefing document for the EU Trade and Investment Sub-Committee, dated June 2012, officials from the Department responsible for action on climate change at the European Commission, called DG Climate, noted that although current imports of tar sands crude into the EU were small, these could grow with the Keystone XL pipeline. They are talking about KXL as an export pipeline.

They wrote that that: “Given the increase of tar sand extraction notably in Canada (but also projected increase in Venezuela) and projected increased exports from Canada to the US (which would be even more significant when the envisaged pipeline project goes ahead, through which such fuels would come to the EU), it is clear that this percentage will only increase over the coming years.”

I have read loads of Commission documents on tar sands over the last few months and this is the first time that I have seen the Commission talk about KXL as an export pipeline.

I think that’s important. Especially if you are sitting in Washington and concerned about political legacy and energy security. Because you might have a whole lot of pain for not a lot of gain.