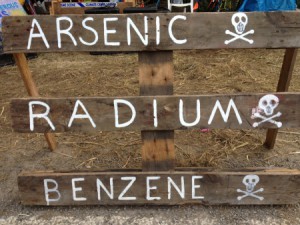 At least when the American fracking boom started, regulatory officials could argue they were ignorant of the risks of fracking that have now become apparent such as chronic water and air pollution.

But in Britain, the politicians who are pressing ahead with fracking are either deliberately ignoring the risks or they are being wholly incompetent in their understanding of the ecological and climatic risks of fracking.

Both scenarios are deeply troubling.

In the US, as fracking has boomed so has the scientific evidence that it causes water pollution, and has caused “significant damage” to drinking water aquifers in some towns.

And only recently a scientific study published in the Proceedings of the National Academy of Sciences, concluded that that US emissions of methane are probably 50 percent higher than current estimates by the US Government.

Not all of these emissions were from fracking, some will be from livestock too, but it is no coincidence that methane levels rose as fracking took off, although the study only captures the beginning of the fracking boom.

Moreover, the EU has also identified eight areas in which fracking could pose a “high risk” to the environment, including air and noise pollution, ground water and surface water contamination and biodiversity.

Despite these and other warnings, the Chair of the British government’s Advisory Body on Climate Change has said that Britain should press ahead with fracking. Lord Deben dismissed environmental concerns raised by “people on the green end”, which is a strange way to dismiss the EU and the Proceedings of the National Academy of Sciences, amongst others.

I doubt the Wheeling-Ohio County Health Department Administrator, Howard Gamble, has ever seen himself as “on the green end” either.

But Howard Gamble is concerned about the elevated levels of the cancer-causing chemical benzene, which have been found near fracking sites throughout Ohio county.

“The levels of benzene really pop out. The amounts they were seeing were at levels of concern,” Gamble says in describing the results of testing his Department recently performed at well sites throughout Ohio County. “The concerns of the public are validated,” he adds.

This is not the first time that levels of benzene have been a cause of concern. The local Department of Occupational & Environmental Health Sciences in the School of Public Health at West Virginia University found levels of the chemical near one well site that were so high that the scientists recommended “respiratory protection” for those in the area.

Meanwhile, back in Britain the government looks set to bribe local communities with £100,000 if they allow fracking in their locality, even if no gas is found.

This begs the obvious question: what price is a clean environment?

Or more bluntly, what is the price someone would pay in return for an industry that billows out cancer-causing chemicals at dangerous levels?