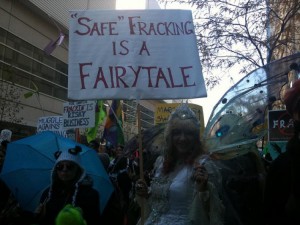 The European Union is the latest organisation to raise serious concerns about the environmental impact of fracking.

The EU has released three detailed reports to assess the risk to the environment and human health from shale gas extraction.

In a devastating and highly detailed critique, the first report on the environmental impact of fracking, identifies eight areas in which the practice could pose a “high risk” to the environment, including air and noise pollution, ground water and surface water contamination and biodiversity.

The study examined risks to the environment and health from individual sites as well as the cumulative effect of many fracking wells. “We’ve drawn together all the literature on shale and environmental risks in one place,” report co-author Mark Broomfield told the website BusinessGreen. “One of the main issues is that the risks are cumulative as shale gas reserves can cover a very wide area.”

The problem for the EU – like the US – is that it does not have the specific legislation in place to protect people and the environment from fracking.

The study warns about the “inadequacies in EU legislation that could lead to risks to the environment or human health not being properly addressed.”

The second study confirmed that shale gas is more polluting than conventional gas: The report concluded that “we have estimated the GHG emissions per unit of electricity generated from shale gas to be around 4% to 8% higher than for electricity generated by conventional pipeline gas from within Europe. These additional emissions arise in the pre-combustion stage, predominantly in the well completion phase when the fracturing fluid is brought back to the surface together with released methane.”

Not surprisingly the reports were criticised by Polish officials, while the newly appointed British Environment Secretary Owen Paterson, a known climate sceptic, is said to be opposed to anything that slows down the shale gas revolution.

Paterson faces a fight against leading environmental groups such as WWF, and Friends of the Earth who have warned the British government it “must halt shale gas drilling to properly assess the risks – including the impact on climate change.”

And further evidence of the need to tackle climate change urgently came from the British Health Protection Agency which warned that our global warming may increase the number of heat-related deaths in the UK by 540 per cent.

The HPA said that by 2080 almost 11,000 people could die every year as a result of heatwaves, up from 2,000 at the moment. The problem is even worse if the ‘heat island effect’ that causes temperatures to rise in cities is included.  Rising temperatures could also mean that Britain could become susceptible to tropical diseases.

Professor Sir Andy Haines, HPA climate change chief, said: “This report shows that in the UK, climate change is likely to have a range of effects on health and that we can anticipate and prepare for some of these effects. However, it also suggests that well-designed policies to reduce greenhouse gas emissions in sectors such as electricity generation or transport can have important ancillary benefits for health.”

Well generating electricity from renewable sources rather than shale gas would be a start.