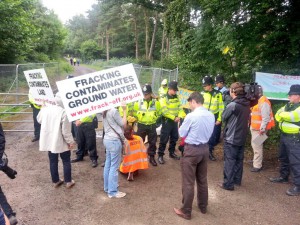 Residents of the town of Balcombe in rural West Sussex in England, who are trying to stop fracking in their locality, have been given further cause for concern by leaked documents from the Environmental Protection Agency (EPA) in the US.

One of the absurdities of the fracking situation in America is that there is no federal oversight of drilling. The EPA is currently investigating fracking and is due to report sometime in 2014

To most people the rational solution would be for the EPA to examine the risks before the technique became widespread, rather than the other way around. The words “horses”, “barn doors” and “bolted” come to mind.

But what is really worrying is that although the EPA is still investigating in the US, over in Britain politicians are arguing that fracking has been shown to be safe in America. This is clearly not the case.

Although its major study has not been completed, the EPA has also been examining individual incidents of water pollution from fracking. One of those is in the town of Dimock in Pennsylvania in the US, which become imfamous for starring in the film Gasland. Local residents there have complained of becoming sick, of dead livestock and flammable tap-water.

According to a leaked powerpoint from the EPA, fracking has caused “significant damage” to drinking water aquifers in the town.

The presentation, based on data collected over 4 1/2 years at 11 wells around Dimock, concluded that “methane and other gases released during drilling (including air from the drilling) apparently cause significant damage to the water quality.”

The presentation also concluded that “methane is at significantly higher concentrations in the aquifers after gas drilling and perhaps as a result of fracking and other gas well work.”

Some wells underwent “short-term disruption,” whereas four others experienced long-term disruption to their water quality. In five wells contaminated with methane the chemical fingerprint, or isotopic composition, was the same as methane from the local fracking wells.

Despite these concerns, the EPA stopped investigating and told residents the water was safe to drink, leading to concern from environmentalists. “You would really expect the federal government to follow up on this,” Kate Sindig, director of the Natural Resources Defense Council’s fracking defense project. The EPA abandoned its investigation “without a satisfactory explanation to the people in the communities,” she told the Washington Post.

The EPA’s concerns are backup up by new scientific research that examined 100 private water wells in and near the Barnett Shale in North Texas, which revealed elevated levels of potential contaminants such as arsenic and selenium closest to natural gas extraction sites.

The scientific research was published last week in the journal Environmental Science & Technology. The peer-reviewed paper focuses on the presence of metals such as arsenic, barium, selenium and strontium in water samples. On average, the researchers detected the highest levels of contaminants within 3 kilometers of natural gas wells, including several samples that had arsenic and selenium above levels considered safe by the EPA.

The scientists are arguing that more research is now needed into fracking’s safety. “This study alone can’t conclusively identify the exact causes of elevated levels of contaminants in areas near natural gas drilling, but it does provide a powerful argument for continued research,” said Brian Fontenot, the lead author of the study from University of Texas in Arlington.

Fears about water contamination are also growing in Britain. Earlier this month, the water companies warned that fracking could contaminate drinking water with methane gas and chemicals.

Water UK, which represents all major UK water suppliers, also warned that fracking’s “huge” use of water could cause shortages in areas of low supply, like South East England, where the Balcombe anti-fracking protests are continuing.