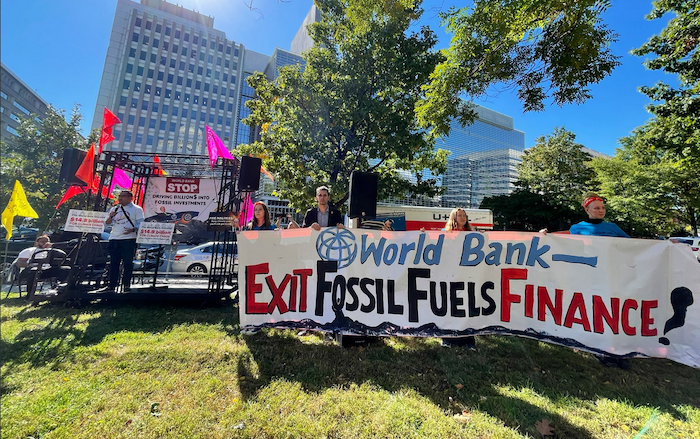 Last week, civil society activists from across the world convened outside the Washington DC headquarters of the World Bank to protest the Bank’s highly controversial continued financing of fossil fuel projects.

Advocates from across the world came to march, meet with World Bank employees, and tell heartbreaking stories of how the Bank’s fossil fuel investments are destroying their communities. They hung banners and made speeches. Mobilizing under the united call of #ForPeopleForPlanet, their message was simple: the World Bank must stop funding fossil fuels, stop colonial exploitation, and help implement an urgent and just energy transition to prevent climate catastrophe. The Bank must also sack their climate denying boss, David Malpass — he has proven himself unfit to run the Bank, many times over.

?We've taken our protest to the street. We are outside the World Bank calling for it to #stopfundingfossils#worldbankworldproblems pic.twitter.com/H5MIDXRa19

It’s 2022 & devastating climate impacts are mounting, but @WorldBank is run by a climate denier + funds billions in oil + gas per year.

The protests occurred outside the Annual Meeting of the World Bank, the first meetings held in person since 2019 due to the global COVID-19 pandemic. The World Bank claims it has changed its ways, but continues to invest in climate chaos. Activists hung banners and made light projections at the Lincoln Memorial and World Bank headquarters throughout the week.

The scale of the World Bank’s failure is staggering. The institution hands out over USD 100 billion every year to developing countries — but a large chunk of these funds are still being invested in fossil fuels like oil, gas, and coal.

A new report issued this month by the Big Shift Global campaign, a coalition of 50 civil society from the Global North and South, calculated that the World Bank has given a staggering USD 15 billion to fossil fuel projects since the 2015 Paris Agreement.

Most of these projects have been under the leadership of the current boss of the bank, David Malpass, who was nominated for the position by former U.S. President Donald Trump. His leadership on climate has been abysmal, with experienced and respected critics calling him a “climate and development failure”.

The cold truth is that Malpass is a climate denier, who must be replaced in the name of climate justice and action.

When asked recently three times about former U.S. Vice President Al Gore’s claim that he was a climate denier and whether he agreed that “man-made burning of fossil fuels is rapidly and dangerously warming the planet,” Malpass refused to answer the question. Eventually he stated “I don’t even know — I’m not a scientist.” Dangerously reminiscent of decade-old language even most modern climate deniers have abandoned, his stance on climate is so bad that the Biden Administration is said to be trying to find ways to oust him.

Malpass’s speech at the World Bank’s “Get to Net Zero” event last week was interrupted by a protestor calling him a climate denier.

.@DavidMalpassWBG’s speech at the #GetToNetZero event was just interrupted by a protestor, calling out that he’s a climate denier

Malpass went on to mention the World Bank’s stalled Paris Agreement alignment approach – it’s vital there is a public comment period of this process! pic.twitter.com/sPSOiR0hWT

Malpass has since tried to claim he is not a denier, but his actions speak for themselves. In the group’s “Investing in Climate Disaster: World Bank Group Finance for Fossil Fuels” report, the Big Shift Global coalition highlights ten fossil fuel projects that were financed directly by the World Bank since the Paris climate agreement, largely under Malpass’s leadership.

One of the those projects is the new Java coal mine. “It is obvious that the new Java 9 & 10 coal-fired power plants will bring more disaster in terms of environmental, social and health issues, in an area already covered with coal plants and industries,” says Yuyun Indradi, Executive Director of Trend Asia. “Funding such projects will not help our peoples, our country, and our planet. Withdrawing that funding and redirecting it for renewable energy is urgently needed.”

Leader after leader from the Big Shift Global lined up to condemn Malpass’s leadership. “Each time the World Bank invests in another fossil fuel project it fuels more climate disaster. There is no justification for using taxpayers money to exacerbate the climate crisis. Communities across the globe have a right to clean, sustainable, secure, renewable energy,” says Sophie Richmond, the Global Lead of the Big Shift Campaign.

“The earth is on fire, and the World Bank is one of the biggest climate arsonists in disguise […] The ExxonMobils, Shells, and TotalEnergies of the world are lucky to have the World Bank in their corner. This has to stop,” says Ute Koczy of Urgewald.

My colleague Bronwen Tucker adds: “Under Malpass, the World Bank Group is running backwards on climate AND just development. Malpass must go.”

Other solidarity protests around the world joined in:

?Solidarity in the fight against @WorldBank fossil fuel finance.#WorldBankWorldProblems https://t.co/pqHAVTFiXz

Meanwhile, across town, last week attendees gathered for the publication of a new international climate anthology, Harvest Moon: Poems and Stories from the Edge of the Climate Crisis. The anthology spans 24 countries and 11 languages, and is co-edited by Renato Redentor Constantino, Oil Change International board member and Institute for Climate and Sustainable Cities Executive Director. The powerful pieces in this collection counter the tired stories of climate doom and gloom coming out of places like the World Bank.

Opening the event, Oil Change Executive Director Elizabeth Bast highlighted the need for more climate action and collaboration as the annual meetings of World Bank and International Monetary Fund were happening across the city.

The afterward of the book was written by Oil Change board member Rebecca Solnit: “You could make an atlas of trouble out of this book […] We will need stories more than ever,” she wrote.

How true, Rebecca, how true. We are tired of the old stories of pollution and privileged power used to pollute, epitomised by David Malpass. The bottom line is Malpass must go, and the World Bank must join its peers in ending all finance for fossil fuels. The coalition of Big Shift Global will continue fighting the World Bank giant until the Bank commits 100 per cent of its funding to clean energy and renewables. Nothing else will do.