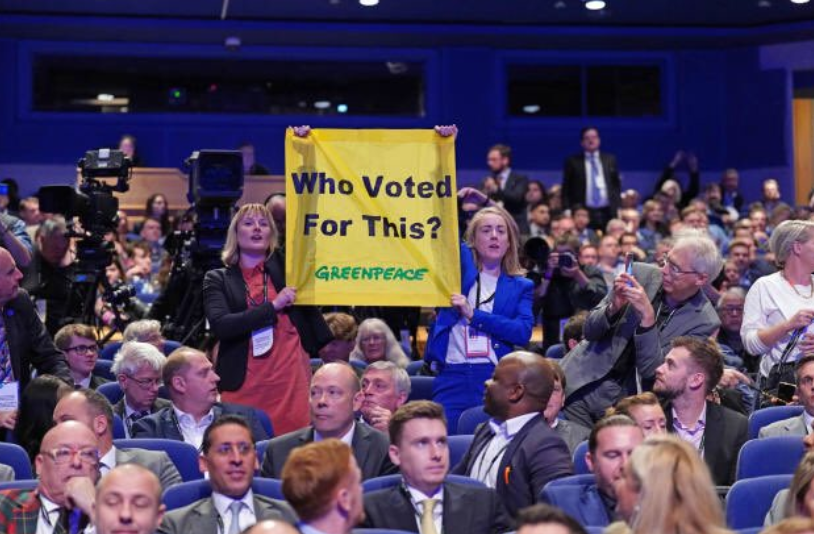 In her big speech, the British Prime Minister Liz Truss attacked a so-called “anti-growth coalition” of unions and green campaigners as well as “vested interests dressed up as thinktanks.”

A Conservative politician attacking environmentalists is nothing new. But Truss is increasingly being seen as the most right-wing, anti-environmental politician for decades in the UK, ideologically opposed to action on climate change and ecological protection.

It is no wonder then that in the middle of Truss’s speech, two Greenpeace activists, Rebecca Newsom and Ami McCarthy held up a sing saying “who voted for this?”

The banner symbolized Truss’s new hard right pro-fracking and anti-green policies, that not only have no public mandate but also break a Conservative pledge from the last election too.

Writing in the Guardian newspaper afterwards, Newsom and McCarthy outlined why they had undertaken the protest. “Liz Truss’s flagship quest for so-called growth has seen her pledge to take the country down an extreme new track, one for which she has no mandate and very little public support.”

The two point out that Greenpeace has identified at least seven areas across environmental protection, climate action, workers’ rights, and fighting inequality where policies either confirmed or being considered by Truss and her ministers are at odds with the 2019 Conservative manifesto.

“It’s simple, really,” they write, “people voted for strong action on climate and world-leading environmental protections, and also to tackle poverty and inequality, and improve workers’ rights. What they’re getting instead is broken promise after broken promise. It leaves you wondering whether Truss’s government answers to the public or to the hedge fund managers, rightwing thinktanks and fossil fuel giants that are cheering it on.”

It isn’t just us at Greenpeace who are raising these concerns – more than 100 leading businesses have now written to Prime Minister Truss urging her to stick to the UK’s climate commitments.

Other British environmental and conservation groups, who have been attacked by the Truss Government, have also hit back.

Paul Miner, the head of policy centrist Campaign for the Protection of Rural England, said: “This disingenuous ‘anti-growth coalition’ rhetoric ignores rural communities up and down the country who have heartfelt concerns about the government’s agenda. It’s not eco-protesters organising the resistance to fracking, it’s ordinary people who are furious at what they see as a litany of betrayal and broken promises.”

But it is not just fracking. Another policy that Truss wants to implement is opening up the North Sea to some 130 new drilling licenses. And now a new report from the Global Energy Monitor (GEM) has concluded that exploiting new oil and gas fields is “radically at odds” with the UK’s commitments to fight climate change.

Researchers from GEM calculated that if the UK’s North Sea reserves were burnt it would exceed its legally binding carbon budget by almost two-fold.

They outline that “New oil and gas development in the North Sea could produce up to 984 megatonnes of CO2 equivalent and contribute to the United Kingdom exceeding its carbon budget for 2023-2037 by a factor of two.”

The report analyzes potential production 21 of the largest undeveloped fields in the North Sea and finds that development of all or any of these fields would be incompatible with the UK’s and global climate goals.

Scott Zimmerman, the lead author of the report says: “The energy crisis in Europe is a chance for the UK to kick its fossil fuel dependency but by leasing these new fields the UK is showing it’s still hooked on hydrocarbons.”

Quoted by the BBC, he adds: “If the UK claims to be a climate leader, it cannot allow these new fields to start up, nor hold another licensing round.”

But driven by ideology, not science, Liz Truss will ignore such concerns. This is because, although Truss attacked “vested interests dressed up as thinktanks,” it is her Government that is literally joined at the hip with hard right neoliberal think tanks such as the Institute of Economic Affairs (IEA). For years, the IEA led the climate denial movement in the UK.

Much of Truss anti-green agenda can be linked back to the think tanks such as the IEA. Even influential conservative commentators have taken to twitter to remark that this is the case:

A massive moment for @iealondon. They’ve been advocating these policies for years. They incubated Truss and Kwarteng during their early years as MPs. Britain is now their laboratory.

Today, in a guest essay for the New York Times, Sam Bright, investigations editor of Byline Times, argues that under Truss’ watch, “Britain has become a libertarian laboratory,” directed by the IEA and other think tanks that are houses near Westminster in the infamous Tufton Street.

Bright notes: “This battalion of free-market thinkers has now been welcomed into 10 Downing Street. Five of the new prime minister’s closest advisers are Tufton Street alumni, including Ms. Truss’s chief economic adviser and her political secretary, and at least nine Tufton Street alumni are scattered across other major government departments.”

These are deeply worrying times in the UK for climate action and environmental protection. We have dark money groups, like the IEA, that have historically been funded by Big Oil and Big Tobacco now effectively writing the Government’s policies. The IEA does not disclose who funds them though. It thrives on a lack of transparency.

Liz Truss has no public mandate. This is not democracy. It is a take over of government by dark money think tanks. When Guardian columnist, George Monbiot, wrote an article questioning whether Truss had handed power to extreme neoliberal think tanks, the head of Public Policy at the IEA, tweeted:

The corporate backers of the IEA will not be believing their luck that their puppet is in Government. The Government is doing their bidding, such as restarting fracking and opening up North Sea drilling, with no democratic mandate. No wonder Greenpeace asked: “who voted for this?”