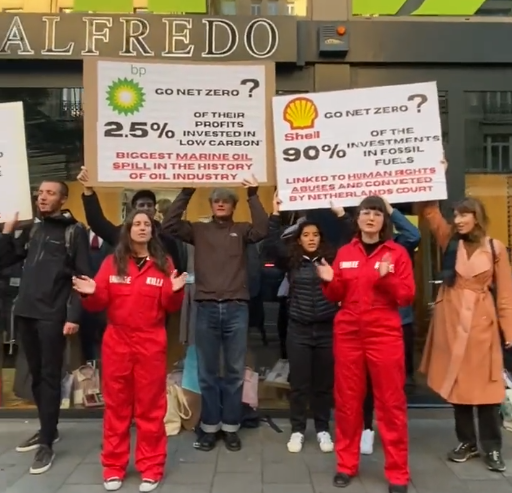 This morning in the luxurious Le Plaza Hotel in Brussels, many of the world top oil firms assembled for a conference on “Go Net Zero Energy.”

The strapline for the conference is “Scaling up the energy transition whilst securing a stable supply.” It is being attended by fossil fuel companies and their financiers as well as dignitaries from the European Commission.

The list of “featured stakeholders” for the conference reads like a “Who’s Who” of climate villains, including Shell, Aramco, Total, BP and Exxon Mobil amongst others.

Although the oil industry delegates will talk about transitioning and the need for net zero, it is all a charade. We have known for decades that the oil industry has seen climate change as a public relations problem, rather than a real one. A problem to be denied, delayed and debunked.

We have known for years that the industry has used a classic playbook, one similar to that of the tobacco industry, in its deceptive fight against action on climate.

One of the defining moments in the fight against Big Tobacco was when millions of documents were released in the nineties as part of what was called the “Master Settlement”.

It gave journalists and researchers primary evidence of the internal workings and thinking of the emails of deception and manipulations: how privately the industry knew that smoking caused cancer and that nicotine was addictive, whilst publicly they still denied it. Here were the emails that proved Big Tobacco was lying.

That’s why internal industry documents are so important. They give us an insight into the inner sanctum of how an industry is thinking and operating.

And that is why we know the industry speakers today at the Net Zero conference in Brussels will be speaking with forked tongues. Today will be about public spin, and promises, whereas we know the reality is very different.

That is why outside the conference, climate activists, including my Oil Change International colleague, Laurie van der Burg, held placards calling out the industry’s false solutions and greenwashing over climate.

Today we protested #GoNetZeroEnergy attended and sponsored by @Shell @aramco @bp_plc @TotalEnergies and others ?#FossilFuels has got to go – we’ll always be there to hold you accountable ?? pic.twitter.com/QQUCmnhMVV

Today’s demonstration comes on the back of devastating revelations from the U.S about the internal thinking and policies of Big Oil.

Last week, Rep. Carolyn B. Maloney, the Chairwoman of the Committee on Oversight and Reform, and Rep. Ro Khanna, the Chairman of the Subcommittee on Environment, released a memo of their initial findings of the Committee’s year-long investigation into the fossil fuel industry’s campaign to mislead the American people about the industry’s role in climate change. It is based on documents the oil industry has been forced to hand over.

The press release stated: “Documents Show Big Oil Is Devoted to a Long-Term Fossil Fuel Future and ‘Greenwashing’ Its Record Through Deceptive Advertising and Climate Pledges”

The Committee’s memo found that contrary to their pledges, like BP promising over twenty years ago to go “beyond petroleum,” oil companies are still not organizing their businesses around becoming renewable energy companies. “They are devoted to a long-term fossil fuel future,” said the committee.

The companies may say they are committed to climate action, but document after document reveals otherwise.

One internal Exxon documents shows how the oil giant pressed an industry group, the Oil and Gas Climate Initiative, to remove language from a policy statement in 2019 that “could create a potential commitment to advocate” on the landmark Paris Agreement goals of limiting warming to 1.5 degrees. According to an analysis by the New York Times, the statement’s final version did not mention Paris at all.

Another 2019 Exxon memo sent to the company’s boss Darren Woods, which was written before that year’s UN climate talks, outlined the need to “remove reference to Paris Agreement” from the statement because “creating a tie between our advocacy/engagements and the Paris Agreement could create a potential commitment to advocate on the Paris Agreement goals.”

And even when the companies talk about “net zero”, or a “just transition”, they are using the terms as cover to keep people drilling. Chevron for example, argues that “oil and gas” are the “lower carbon solutions that ensures a just transition.”

Shell, meanwhile, has touted its “Sky scenario” as an ambitious path to achieve net-zero emissions. However, an October 2020 email for the company’s U.S. President said that this is “not a Shell business plan” and has “nothing to do with our business plans.”

This is not an isolated email. The documents reveal just how scared Shell is from climate lawsuits, such as the one brought by Friends of the Earth Netherlands (Milieudefensie) together with 17,000 co-plaintiffs, which ruled that Shell must reduce its CO2 emissions by 45% compared to 2019 levels within 10 years. The company is currently appealing the ruling.

But it sent shock shockwaves within the company. One Shell memo warned: “We are seeing a rising number of legal cases including active litigation specifically against Shell and other oil companies related to climate change and its impacts.”

It outlined internal Shell guidance, which was developed to “insulate Shell” from lawsuits over “greenwashing” and “misleading investors” and called on employees to emphasize that net-zero emissions are “a collective ambition for the world” rather than a “Shell goal or target.” Shell has energy intensity targets but “no immediate plans to move to a net-zero emissions portfolio over our investment horizon of 10-20 years.”

The guidance tells Shell employees, “Please do not give the impression that Shell is willing to reduce carbon dioxide emissions to levels that do not make business sense.”

Shell’s internal position of a business-as-usual drilling policy did though cause consternation for some employees. After the company posted on Twitter asking others what they would do to reduce emissions, a communications executive emailed that this could be seen as “gaslighting” the public, explaining: “We are, after all, in a tweet like this, implying others need to sacrifice without focusing on ourselves.”

Many critics of the oil industry, including OCI, have long said that Carbon, Capture and Storage (CCS) is a false solution. And now we know that oil industry thinks it is too and is just a ruse to carry on drilling.

For BP, the documents highlighted how CCS would “enable the full use of fossil fuels across the energy transition and beyond.” Meanwhile, when talking about CCS, Shell warned that “We want to be careful to not talk about CCUS as prolonging the life of oil, gas or fossil fuels writ large.”

Other false solutions are Exxon’s well promoted and advertised use of algae-based biofuels. Although the company spent nearly a cool $70 million advertising its research, one investor presentation admitted the technology is “[s]till decades away from the scale we need.”

One Exxon PR manager warned that implying algae can be deployed on a mass scale would be misleading, and “might create some angst with the research folks who know that.”

If these revelations were not serious enough, then there were the revelations that Big Oil executives joked about going out drinking before we all “burn up” from climate change and  their downright pathetic attitude towards their critics.

Outspoken climate scientist, Peter Kalmus, was disinvited by Shell after the company saw his slides. The company could not handle the truth. When the Sunrise Movement announced a “Road to the Green New Deal”, one Shell press officer replied hoping they got “bedbugs”.

Despite the explosive nature of these documents, the New York Times reports that Shell, Exxon Mobil, Chevron, BP, the API and U.S. Chamber of Commerce have yet to produce further key documents that have been requested by the committee

Understandably the response from politicians, scientists and activists was downright anger: Chairwoman Caroline Maloney said “My Committee’s investigation leaves no doubt that, in the words of one company official, Big Oil is ‘gaslighting’ the public. These companies claim they are part of the solution to climate change, but internal documents reveal that they are continuing with business as usual.  I call on the big fossil fuel companies to stop their deception and cut their emissions now—before it is too late.”

Subcommittee Chair, Ro Khanna added that the “explosive documents” show that Big Oil was out to “deceive the American public about the climate crisis”. He added that “Internal emails and messaging guidance show that Big Oil’s climate pledges rely on unproven technology, accounting gimmicks and misleading language to hide the reality.”

The new documents are “the latest evidence that oil giants keep lying about their commitments to help solve the climate crisis and should never be trusted by policymakers”, said Richard Wiles, president of the Center for Climate Integrity told the Guardian. “If there is one thing consistent about the oil and gas majors’ position on climate, it’s their utter inability to tell the truth.”

This is a *HUGE* freaking deal: Congress has obtained documents that show Big Oil companies actively lying about their climate commitments and coordinating to downplay their support for the Paris Agreement.

Big oil admits ‘gaslighting’ public over green aims ?
Criticism in the US of the oil industry is intensifying after internal documents showed companies attempted to distance themselves from climate goals
Hold @exxonmobil accountable on @WeDontHaveTime ?https://t.co/1pzV7THUMi

Link to the internal oil industry documents is here: