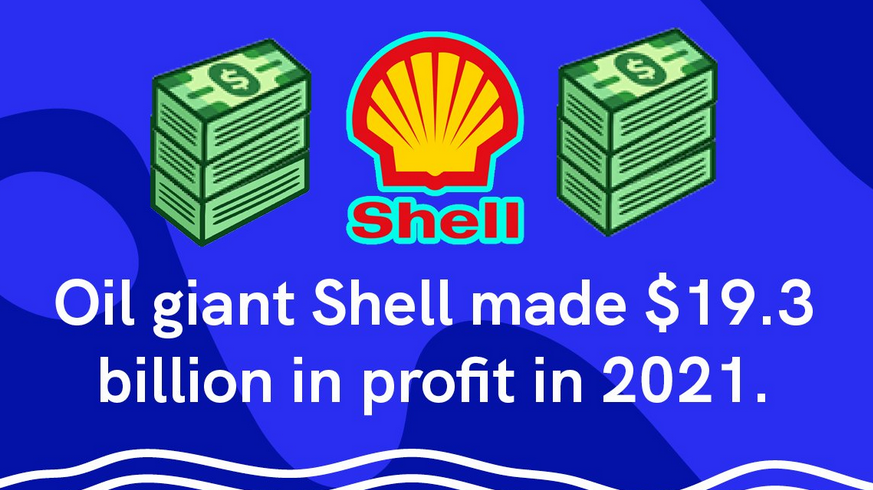 There are no words to do it justice. For years, campaigners have argued that the vicious boom-bust fossil fuel cycle impacts the poor and most vulnerable the most, from frontline communities impacted by climate change or dirty refineries to those who struggle to pay the bills.

It is one of the greatest wrongs that millions continue to live in fuel poverty, also in so-called rich countries. For some it boils down to the decision to eat or heat. It is that simple.

Add onto that a further injustice that when gas prices rise, oil and gas companies make huge profits, while those who are already struggling to pay the bills find it even harder to avoid a desperate spiral into debt.

And today, with a timing that seems cruelly ironic, that dichotomy of extreme wealth versus extreme poverty was again laid bare.

On the back of spiraling gas prices, the oil giant Shell today announced it had quadrupled its profits to over $19.3 billion in 2021. Ben van Beurden, Shell’s chief executive, who received a pay package of more than €6 million last year, said 2021 had been a “momentous year” for the business.

The progress we made enables us to be bolder and move faster, creating value for shareholders, customers and wider society.

At the same time, the British Conservative Government announced that the price cap, the mechanism by which the energy regulator controls the price of gas, would rise 54% by £700 to £1,971, resulting in an estimated total increase of £12.5 billion on energy bills.

However, rather than using its profits to address the gas price crisis including through reducing reliance on volatile fossil fuels, Shell continues to invest in new oil and gas and plans to buy-back $8.5 billion in shares to boost shareholder dividends.

Many will struggle or fail. The changes are predicted to plunge some six million households in the UK into poverty. No wonder then that opposition MPs in the UK called for windfall tax on the profits. How can you have such extreme wealth at the same time as extreme poverty?

Predictably, Shell lashed out against the idea of a windfall tax, though. Ben van Beurden told the Financial Times: “I am not convinced that windfall taxes — popular though they may seem — is going to help us with supply, nor is it going to help us with demand. But, of course, we stand ready to be in dialogue with government on all the measures that we can collectively take.”

Rishi Sunak the Chancellor of Exchequer for the British Government also dismissed the idea of a windfall tax, arguing it would deter investment.

His stance was met with criticism by leading green commentators in the UK who clarified that increasing domestic production would not serve to reduce energy bills, given gas is traded internationally and gets sold to the highest bidder. Indeed, as gas prices soared in the UK in September 2021, the UK exported a record amount of gas to Belgium. Increasing production does also not serve to significantly increase government revenue.

Shell moved its headquarters from the Netherlands to the UK precisely because it wanted to avoid the Dutch dividend tax and because the UK is the most profitable jurisdiction for oil and gas companies given the significant tax benefits for the industry.

Tessa Khan, Founder & Director of Uplift, also highlights that the industry does not guarantee reliable jobs either. “Jobs in the industry can only be relied on when prices are high. When they fall, as they inevitably do given the volatility of fossil fuels, they disappear. E.g. more than 20,000 people in the industry lost their jobs in 2020.”

Furthermore, a survey among 1,300 oil and gas workers published by Platform last year showed that 81.7% of workers would consider moving to a job outside the oil and gas industry.

Leading environmental commentators in the UK were scathing:

Sunak doesn't get that the world is changing and that there's a climate crisis https://t.co/Se88OmJqlC

So, just to recap, the @Shell_UKLtd billionaires driving the #ClimateCrisis are making even vaster profits at a time when the most vulnerable people are having to choose between heating and eating?

CarbonTracker was also quick to point out that drilling for more gas is not the answer to rising fuel bills.

Reliance on #gas? to balance variable wind output means two things: more volatile EU demand for gas, & greater reliance on the ‘marginal molecule’ – i.e. the most expensive gas available at any given moment – to clear the market https://t.co/CcNvxbA9jv #GasCrisis pic.twitter.com/gtIYiYKQxe

Meanwhile there are other blazing inconsistencies that commentators are picking up on. We continue to fund companies such as Shell and Exxon with massive subsidies, yet somehow we cannot tax the companies properly. And this is why so many people are angry about Big Oil’s huge profits while so many people are suffering.

Exxon Mobil knew about climate breakdown in the 1970s. 2021 was it's most profitable year in seven years.

Since the Paris agreement, the UK government has given Exxon £360m worth of subsidies.

But it's 'not sustainable' to tax the oil companies to support those in fuel poverty.