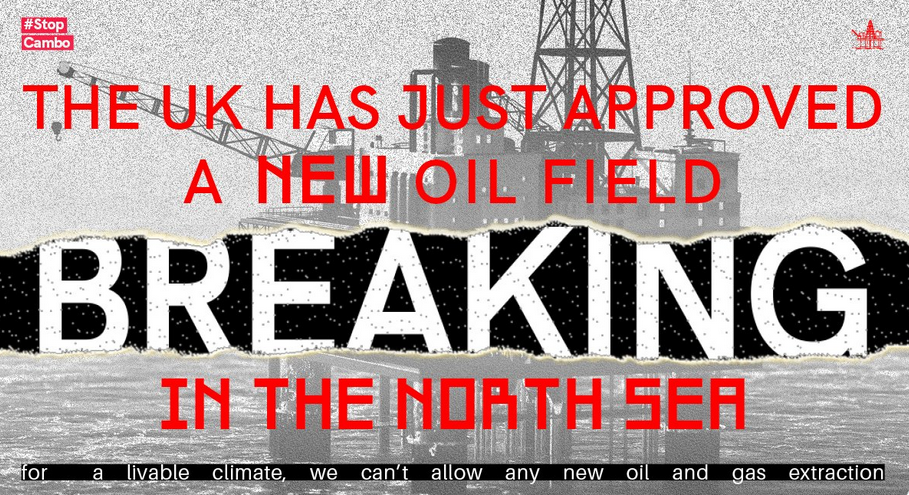 The British Prime Minister, Boris Johnson, has always been a climate charlatan.

A recent convert to the issue, he loves to talk about how Britain is a green champion in the urgent race to avoid a climate catastrophe.

He can certainly talk the talk. Speaking to world leaders at the COP26 Summit, Johnson said, “the longer we fail to act the worse it gets and the higher the price when we are eventually forced by catastrophe to act because humanity has long since run down the clock on climate change.”

“It’s one minute to midnight on that doomsday clock and we need to act now,” added Johnson. “If we don’t get serious about climate change today, it will be too late for our children to do so tomorrow.”

Johnson knows that the only way to act is to stop pumping carbon into the atmosphere. And to do that we have to stop drilling. And we have to stop developing new oil and gas fields. Not tomorrow, but today.

But Johnson is a climate hypocrite too. He knows that the scientists have said we cannot carry on drilling if we want a reasonable chance of keeping temperature rise to 1.5 degrees Celsius.

But he carries on drilling. Just weeks after hosting the COP26 summit, and despite still holding the COP Presidency, Johnson’s government has given the go-ahead for the Abigail oil and gas field off the east coast of Scotland. It will cost about USD $200 million to develop and could contain 5.5 million barrels of oil and gas equivalent. The approval was quietly given last month by the regulator, the Oil and Gas Authority.

It is no wonder that the news was met with dismay by climate campaigners, including Oil Change International:

The UK govt decision to approve the Abigail oil field makes a mockery of its pledge to keep 1.5°C "alive".

As @CaroRance puts it:
“there is no such thing as a climate-compatible oil and gas dvlt."

.@NicolaSturgeon, if Cambo wasn't ok, why is Abigail?https://t.co/WAF9w0IIhk

Tessa Khan, the director of Uplift UK, told the Guardian that the proposed oil field would “see little to no benefit for UK energy customers or taxpayers, which only worsens the climate crisis, and where the only winners are the oil firm behind the project.”

Khan said the government should instead cut the UK’s reliance on “very expensive, highly polluting energy” in favor of a “serious response” to both unaffordable energy bills and the climate crisis based on renewable energy.

“The government needs to stop rolling over for the oil and gas industry, stop dishing out licenses, and get on with making sure people have access to affordable, renewable energy,” she said.

Caroline Rance, a climate and energy campaigner for Friends of the Earth, added, “the simple fact is that there is no such thing as a climate-compatible oil and gas development.”

“Climate science is crystal clear that burning fossil fuels is the key driver of the climate crisis and that there can be no new oil and gas fields anywhere in the world if we’re to limit warming to the 1.5C limit,” said Rance.

Meanwhile Caroline Lucas, the only Green MP in Westminster, tweeted:

Just when you thought the Government couldn’t to anything worse this week – they’ve just approved a new oil field. Yep, UK still holds the #COP Presidency & yep, they’re meant to be showing climate leadership but hey, it’s not like it’s an emergency or anything #KeepItInTheGround pic.twitter.com/3gW4tdfC5k