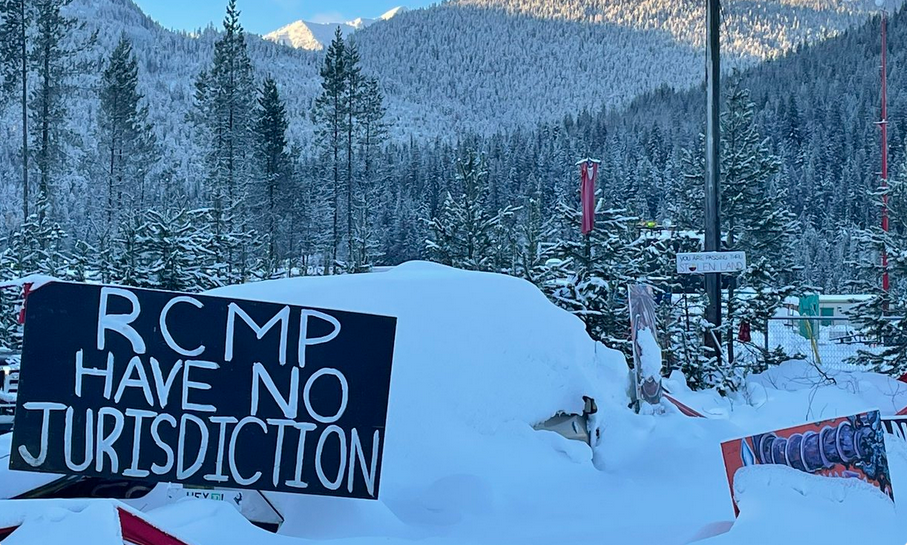 The New Year is meant to be a time of celebration. A time of hope and renewal.

But not so for Wet’suwet’en First Nation, who are trying to stop the disastrous Coastal Gas Link pipeline being built on their unceded land in British Columbia.

The gas pipeline is due to transport fracked gas 670 kilometres from northeastern B.C. to an LNG facility on the coast at Kitimat.

It is worth remembering that leading climate scientists as well as the International Energy Agency both said last year that we cannot afford to exploit new reserves of oil and gas if we want a livable future.

But this is also a fight over First Nations rights and sovereignty. The Wet’suwet’en have been resisting the pipeline since 2018, establishing a checkpoint on their land that year. Well before this, they won a landmark land rights victory in the Supreme Court of Canada recognizing their title in 1997, and successfully fought to stop the Northern Gateway pipeline.

But the Canadian and British Columbia governments are responding with force rather than upholding their commitments to the UN Declaration on the Rights of Indigenous Peoples (UNDRIP). There have been four militarized raids by the RCMP on the site in the last four years, resulting in dozens of arrests and international solidarity protests.

And now the Wet’suwet’en fear another raid. So instead of a peaceful New Year, they once again fear the overwhelming oppression and potential violence of the state. There are reports that “dozens of militarized” Royal Canadian Mounted Police (RCMP) are en route to Wet’suwet’en territory, to once again facilitate construction of the pipeline.

Reports coming out from the locality outline how local hotels have been booked up for the next month by the RCMP. There are unconfirmed reports that the RCMP’s feared “Community-Industry Response Group” (CIRG) unit — essentially a paramilitary resource extraction protection unit — has been activated.

Please offer prayers and support for all of our friends on our People’s Yintah today. There are updates coming in from the @UBCIC that @rcmpgrcpolice CIRG Units started amassing in Houston and Smithers hotels again. pic.twitter.com/Tse2otblYs

For the fourth time in four years, we have received information that dozens of militarized RCMP are en route to Wet’suwet’en territory… pic.twitter.com/gb913vDydb

The Wet’suwet’en have since put out a call on Facebook: “We need boots on the ground and all eyes on Wet’suwet’en territory as we continue to stand up for our lands, our waters, and our future generations! If you can’t be here, take action where you stand – at investors’ offices, RBC branches, or your local police detachment.”

In a recent interview on Youtube, Sleydo’ Molly Wickham, a spokesperson for the Gidimt’en Clan of the Wet’suwet’en nation said that the land protectors were trying to prevent the oil industry and Canadian government trespassing on Gidimt’en territory.

She said that Coastal Gas Link had been doing the work on Gidimt’en territory without “free, prior, and informed consent” and “without permission from our hereditary chiefs and our governance system so we have been pushed to the point where we have to physically protect those laws.”

In a recent online interview Sleydo’ also added, “this is an issue of Coastal GasLink and them not having free prior informed consent of the Wet’suwet’en hereditary chiefs … But it’s also a larger issue about the climate crisis and obviously Indigenous rights in general.”

Indeed, the United Nations Committee on the Elimination of Racial Discrimination has urged Canada “to guarantee that no force will be used against Wet’suwet’en peoples and that the Royal Canadian Mounted Police and associated security and policing services will be withdrawn from their traditional lands.”

Through all of this, Canadian Prime Minister Justin Trudeau and British Columbia Premier John Horgan are still paying lip service to Indigenous reconciliation and claiming climate leadership. They both claim they have no jurisdiction to act even though there is clear federal and provincial responsibility and power to act. Enough is enough. This has to stop. It’s 2022.