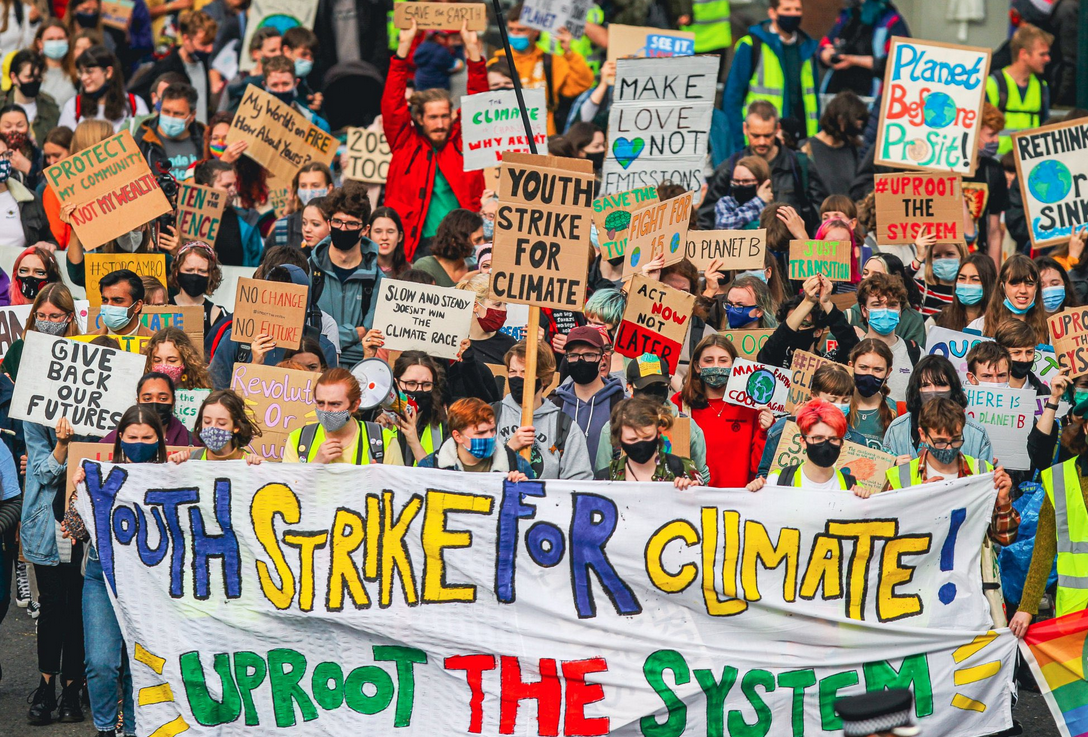 With less than forty days to go until the crucial climate conference, COP26, to be held in Glasgow, young climate activists from across the world made their voices heard loud and clear on Friday.

The “Global Climate Strike”, which was organized by FridaysforFuture, held protests in thousands of locations across the world across North, Central, and South America, Asia, Africa, Europe and, Australasia.

In total, hundreds of thousands of people took part in one hundred countries. The main theme of the day was one of climate justice and uprooting a system that is still embedded to the corrupting power of fossil fuels. #UprootTheSystem was one of the main hashtags.

Twitter was alive with images of protests. In Kenya:

We joined youth & climate justice advocates join the Global Climate Strike with a call for genuine climate solutions that include the protection of coastal marine resources along Manila Bay from destructive development projects. #UprootTheSystem #GlobalClimateStrike pic.twitter.com/EXQ7sdrVIw

In Bangladesh, where activists were demanding the government scrap new coal and gas plants:

People from different cities in Bangladesh have started their strikes to demand for climate justice and climate action! #UprootTheSystem #FridaysForFuture pic.twitter.com/bP0ZTRrmea

In Scotland, where the COP will take place in just a matter of weeks:

We're at the #ClimateStrike outside the Scottish Parliament in Edinburgh where the message is clear: "we shouldn't need to be here!" It's a call for immediate action, just action, that puts people and planet over profit. pic.twitter.com/mJHgle85Y3

One of the leading activists in Uganda, Hilda Flavia Nakabuye, who set up Fridays for Future in the country where at least twenty protests were held, highlighted how often the climate crisis is ignored in Africa and Asia.

She told the Independent newspaper that while people all over the world heard about climate disasters across Europe and the US this summer, predictably the crisis in Africa went unreported. “When we have a flood in Uganda, or Kenya or Nigeria, it’s just business as usual. But if there is a flood in Germany, it will be everywhere in the news.”

Another key message from climate activists is that that the Global North needs to radically increase its climate ambition and action.

Valentina Ruas, a climate activist from Brazil told the Guardian: “The global north should be developing climate policies that have at their core climate justice and accountability to the most affected people and areas. Instead, they continue to exploit vulnerable communities and recklessly extract fossil fuel, while bragging about their insignificant emission reduction plans.”

To this end, Fridays for Future is calling on the Global North to “cut emissions drastically by divesting from fossil fuels and ending its extraction, burning, and use. We need concrete plans and detailed annual carbon budgets with roadmaps and milestones to ensure we get to net-zero with justice and equity in the time needed to address climate change.”

The young activists are also calling on rich nations to pay their climate debt, and work to a genuinely green, just, post COVID-19 transition to renewables. They are also calling on rich countries to meet long-held promises to provide vulnerable nations with USD 100 billion funding each year to help them tackle greenhouse gas emissions, to ensure vaccine equity around the world, and to stop the murder of environmental defenders.

The protests also have other targets too. On Friday, youth climate leaders joined 100,000 people outside the German parliament building in Berlin, just two days before the German election. Climate change has become a crucial topic of conversation in the election, especially after the devastating floods earlier in the year. Nearly five hundred protests happened in Germany alone.

One of those activists taking part in Friday’s demonstration was the prominent German climate change campaigner from Fridays For Future, Luisa Neubauer, who argued that awareness about the “climate catastrophe” is now “higher than ever” among Germans as they prepared to go the polls.

Neubauer told the Independent, “I think a lot of people thought that [in Germany] we were in a way immune to climate disasters. Politicians and the media have been telling us that the climate crisis is something that’s happening only in the far distant future, but never in the here-and-now. Right now there is no political party that has a plan to stay below the 1.5C target [accepted by countries under the Paris Agreement. All we hear are empty promises.”

Another person who was in Berlin is Swedish activist, Greta Thunberg. Speaking before the protests, Thunberg had said: “time and time again, the leaders today show that they do not care about the future — at least it doesn’t seem like it. They say that they listen to us young people, but they are obviously not. They have proven that now again. And that’s why we will be back on the streets.”

The highlights of Thunberg’s speech are here:

Thunberg and Neubauer were joined by other prominent climate activists in Berlin, some of whom have been on hunger strike for weeks demanding that outgoing Chancellor Angela Merkel meet them.

The crowds were huge in the city to demand climate action, with Luisa Neubauer tweeting:

Incredible 100k people on the streets in Berlin today! I’m lost for words. Power to the people. #UprootheSystem pic.twitter.com/LbOGrUEQRL