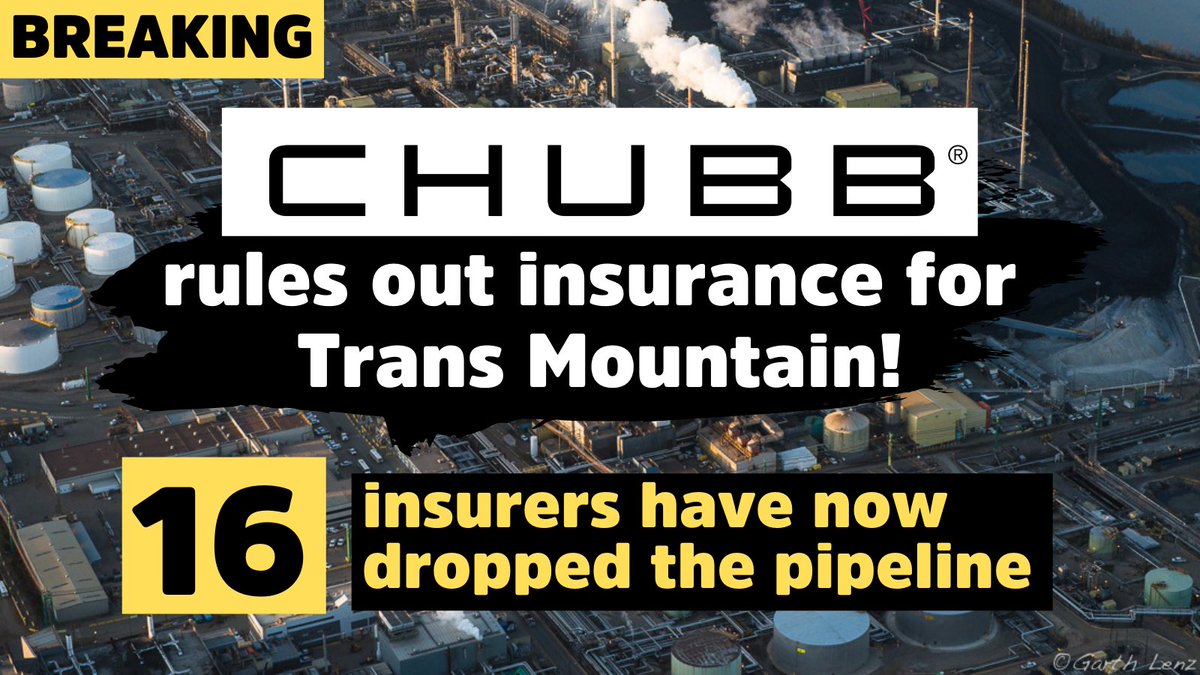 NEW YORK, NY — “Chubb does not provide insurance coverage for any tar sands projects,” a Chubb spokesperson told the The Financial Times today. The announcement was shared in a Tweet by Financial Times reporter Ian Smith.

“By dropping Trans Mountain, Chubb has started to walk the talk around the climate crisis. The Trans Mountain Pipeline and expansion is a fuse to the carbon time bomb known as the Alberta Oil Sands that violates Tsleil-Waututh Nation’s inherent and constitutionally protected rights. We are committed to stopping this destructive and risky project on behalf of the salmon, the orcas and for future generations of people who live in our territory,” said Charlene Aleck of the Tsleil-Waututh Nation Sacred Trust Initiative.

“This is a huge announcement by the world’s largest publicly traded property and casualty insurer. It follows a powerful Indigenous-led movement to stop the Trans Mountain expansion. Another major insurer fleeing the tar sands is further confirmation that we cannot afford expansion of this risky and carbon-intensive sector,” said Grand Chief Stewart Phillip, President of the Union of British Columbia Indian Chiefs. “We now call on AIG, Liberty Mutual, and Lloyd’s of London to follow Chubb’s lead by dropping Trans Mountain and exiting tar sands. And we call on all insurers to adopt policies to ensure that the right to Free, Prior and Informed Consent of Indigenous Peoples is respected.”

Chubb, the world’s largest publicly traded property and casualty insurer, became an early leader on climate change when it adopted a coal policy in 2019, but the company has not made any additional climate commitments since then. In recent months, it has been under increasing pressure for its involvement with the tar sands industry.

“Chubb’s announcement is a critical win for the environment and Indigenous rights. This makes it the 16th insurer to drop coverage of or rule out insuring the Trans Mountain tar sands expansion project,” said Elana Sulakshana, Energy Finance Campaigner at Rainforest Action Network. “But we need more information to understand if this is a future-facing exclusion policy that restricts insurance for tar sands companies and projects like Trans Mountain moving forward. We welcome Chubb’s announcement on tar sands, and call on them to take the next step: rule out all fossil fuel expansion in line with the International Energy Agency’s 1.5 degree pathway.”

Chubb faced repeated protests this summer for insuring the climate-wrecking Trans Mountain tar sands pipeline in Canada, which is opposed by Indigenous communities along the route.

“Our Indigenous and allied direct actions against insurers have worked. The Trans Mountain expansion degrades Indigenous ancestral homelands and sacred waters and is a perpetuation of genocidal practices by the Canadian petro-state. When Indigenous people including our youth rise, the world must listen. I am grateful that Chubb has dropped TMX, and we demand all other interested parties invested in this genocidal project follow suit,” said Erica Masuskapoe, a frontline Indigenous participant in earlier lockdowns at Chubb, AIG, and Liberty Mutual offices in so-called Vancouver, BC.

“Such action would not have been possible if it wasn’t for the leadership and dedication by frontline land defenders. We hope that other insurance companies will take heed and follow suit by recognizing tar sands projects violate indigenous rights and push us further into climate chaos,” said Mea Johnson, Divestment Campaigner at the Indigenous Environmental Network.

With the Canadian federal election slated for next week, Canada’s climate plans — and the fate of the Trans Mountain pipeline — are in the political spotlight.

“Chubb’s decision to cut ties with the Trans Mountain pipeline makes it clear once again that this pipeline is too risky for the climate,” said Sven Biggs, Canadian Oil and Gas Program Director at Stand.earth. “Clearly Chubb CEO Evan Greenberg knows you can’t call yourself a climate leader while backing this pipeline. With just a few days left until Canadians go to the polls we need to ask: How come Justin Trudeau can’t figure that out?”

“This year we’ve seen insurer after insurer walk away from this dirty tar sands project. It’s too risky for the insurance professionals, but apparently not for Canadian politicians. Get in line with the future Trudeau. You don’t need just one more cigarette. Cancel TMX and begin our just transition now,” said Big Bird, a brave tree-sitter who has been living in an aerial camp physically blocking TMX for over a year in so-called Burnaby, BC.

“This is a major victory for Indigenous resistance and the climate. The Trans Mountain pipeline expansion would add as much greenhouse gas pollution per year as 33 coal plants. Now, Trudeau needs to stop supporting this risky project, and end all fossil fuel subsidies,” said Kyle Gracey, Research Analyst at Oil Change International.

“This is a major victory for the Southern Resident killer whales and all who call the Salish Sea home,” said R. Brent Lyles, Executive Director at Friends of the San Juans. “We applaud Chubb’s announcement on tar sands, and we know that this is a big step toward canceling out both the risk of increased tank vessel transport of highly toxic tar sands oil through the Salish Sea, and the risk of increased accidents, oil spills, and vessel impacts to the critically endangered Southern Resident killer whales.”

“At a time when communities are experiencing devastating climate impacts, there is no justifying the expansion of a tar sands pipeline. This is a major win for Indigenous land and water defenders, and organizers who have been pushing insurers and governments to drop Trans Mountain for years. Now, we expect more insurers to follow suit,” said Nayeli Jimenez, Campaigner at Leadnow.