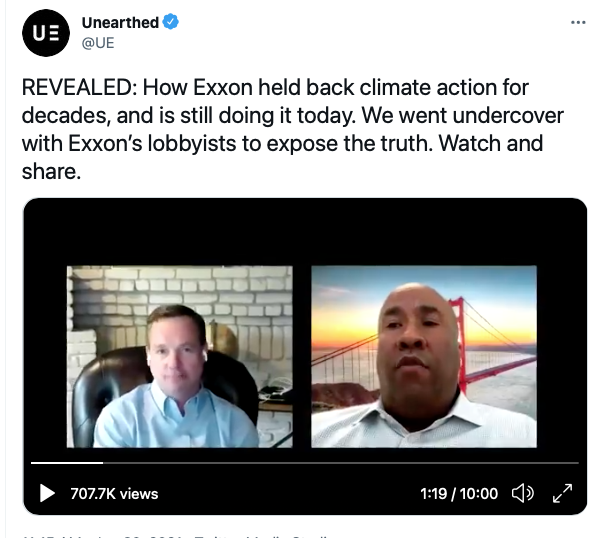 First reported by the U.K.’s Channel 4, the statements came by way of a sting operation by Unearthed, in which they recorded zoom conversations that were staged as discussions with a fake headhunting firm seeking candidates for a fictional new position. What Keith McCoy, a senior director of federal relations for Exxon Mobil, and Dan Easley who served as White House lobbyist for Exxon while Trump was in office, revealed might have been mistaken for a whistleblower complaint if it weren’t for the fact that they were bragging about it in the context of what they thought were job interviews.

See a ten-minute video from Unearthed with excerpts from the “interviews” of Exxon-affiliated lobbyists here:

REVEALED: How Exxon held back climate action for decades, and is still doing it today. We went undercover with Exxon’s lobbyists to expose the truth. Watch and share. pic.twitter.com/yICeai1Sop

In the “interview,” McCoy admits, perhaps for the first time ever in public by an Exxon official, that the company did indeed fight against the science of climate change, and supported “shadow groups” to undermine public understanding of the issue. He says, “Did we aggressively fight against some of the science? Yes. … Did we join some of these shadow groups to work against some of the early [climate] efforts? Yes, that’s true.”

Next, McCoy confirms that Exxon’s “support” of a carbon tax as a policy vehicle for addressing climate change is a cynical ploy to make it appear that the company supports climate action, while backing a policy that they believe won’t ever be passed into law.

He says: “I will tell you there is not an appetite for a carbon tax. It is a non-starter. Nobody is going to propose a tax on all Americans. And the cynical side of me says yeah we kind of know that. But it gives us a talking point. We can say well what is ExxonMobil for? Well we’re for a carbon tax…Carbon tax is not gonna happen.”

As if that weren’t enough, McCoy goes on to talk about how they use the American Petroleum Institute and other trade groups as their tools to take the heat when they have positions that they know will draw public ire. He says, “We don’t want it to be us, to have these conversations, especially in a hearing. It’s getting our associations to step in and have those conversations and answer those tough questions and be for, the lack of a better term, the whipping boy for some of these members of congress.”

We’ve been calling out API for a while now. We know they distort the facts, push fantasy technology that only serves to continue the status quo reliance on fossil fuels, and advocate for the carbon tax that Exxon’s own lobbyists know won’t ever happen.

You can read more on how the API distorts reality in service to its members like ExxonMobil as follows:

Exxon’s McCoy also tells the truth about Exxon’s views on fossil gas, not as a so-called bridge fuel to a green energy economy, but as a “forever fuel”. He says: “On a clean electricity standard, we think natural gas will play a key role in anything. And not just as a bridge fuel. We think it is a low emission energy source and should be part of a clean electricity standard.”

But the reality is, fossil gas is a bridge only to climate chaos. You can read more on that here.

Easley has received somewhat less attention in media coverage, but some of his statements are notable as well. In particular, he brags about his working hand-in-hand with the Trump administration to protect Exxon’s profits. In particular, Easley calls out his success in protecting “preferential tax treatment” for Exxon (read: subsidies) and the lowering of the corporate tax rate, which he claims, as others have reported, benefited Exxon to the tune of billions of dollars.

In perhaps the most timely revelation, McCoy details his work to strip climate action from the infrastructure bill currently being negotiated between the White House and US Congress. He identifies 11 Senators he prioritizes and works to influence, particularly in the fight to protect Exxon’s bottom line and continued expansion of oil and gas drilling during the ongoing infrastructure talks. He calls out West Virginia Senator Manchin, in particular, suggesting McCoy has a weekly standing call with the Senator, who heads up the Senate Energy Committee. McCoy also calls out Senator Coons of Delaware, who is close with President Biden, in particular as a key target of influence.

After an Exxon lobbyist bragged about his regular access to Joe Manchin, I asked a bunch of environmental groups whether they get the same access. Here are their answers: https://t.co/Xm78VgEtvr

None of these revelations come as a surprise to use at Oil Change International. We’ve called out ExxonMobil’s disastrous and dangerous role in US climate and energy policy for years. But nevertheless, these revelations should indeed be shocking to all of us as they lay bare the true reality of Exxon’s dangerous views as a corporation and how they work the political system to allow them to continue their damaging ways. Further, our Big Oil Reality Check analysis showed that Exxon has no intention of aligning their business with what’s necessary to achieve our collective climate goals, scoring worst in the bunch of badly-scoring major oil companies.

The Exxon lobbying scandal is spreading.

Coverage of the undercover report has been broad and damning. The New York Times said “In Video, Exxon Lobbyist Describes Efforts to Undercut Climate Action” while National Public Radio said “Exxon Lobbyist Caught on Video Undermining Biden’s Climate Push.” At CNN, they called it an “anti-climate campaign” being uncovered.

For his part, McCoy issued an “apology” on his LinkedIn account, which read like a “sorry I said the truth” statement more than a recanting of his statements. Earther has more here.

Meanwhile, Exxon has been sent scrambling to backpedal the remarks of their current and former senior employees. They issued an “apology” that was swiftly met with extreme skepticism:

This delayed apology doesn't actually apologise, it is a CEO blaming his staff.

What lobbyists say and do matters, but Exxon has fought climate action for decades. This is what dodging responsibility looks like. It's not what change looks like. https://t.co/wD6m1tdsJy

Exxon's apology is perhaps the most "sorry we got caught" apology I've ever seen. https://t.co/iQQ0hZ7uLO

Our thanks to the Unearthed team at Greenpeace for their excellent work in exposing, yet again, the truth behind Exxon’s greenwash.

This is brilliant and important work by our friends at @UE, exposing what we and allies have said for years: Exxon can't be trusted, is standing in the way of climate progress, and must be held accountable. https://t.co/AWvzCrM5sd