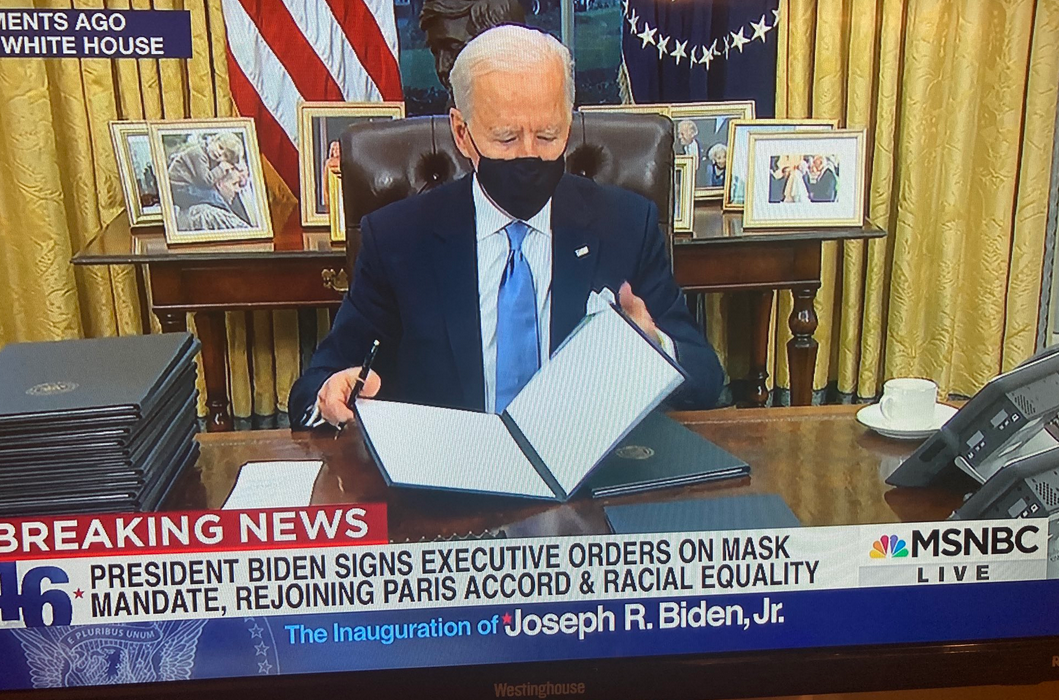 And so as President Biden sets to work on his program for his first 100 days, there is increasing hope for significant action on climate change, a stark contrast from the toxic legacy of the Trump Administration.

During his inaugural speech yesterday, Biden said, “a cry for survival comes from the planet itself. A cry that can’t be any more desperate or any more clear,” adding that the United States must win the “the battle to save our planet by getting the climate under control.”

And true to his word, wasting no time, within hours of being sworn in, Biden issued an executive order reinstating the U.S. to the Paris Climate Agreement after a 30-day notice period.

The Post reported that rejoining Paris was “the first step in what Biden has vowed will be a sustained effort to safeguard the nation’s air and water, protect endangered species and combat climate change at home and abroad.”

In total, Gina McCarthy, Biden’s top climate adviser, told the media that Biden will reverse “more than 100” climate-related policies enacted by Trump beginning by undoing “some of the harmful actions that happened in the previous administration’s watch, so that we can move forward in combating the climate crisis.”

Biden has also moved to quash once and for all the KXL pipeline, as we reported earlier in the week, and ban new drilling in the Arctic National Wildlife Refuge (ANWR).

It's good to see the executive orders @JoeBiden intends to issue today. pic.twitter.com/MXjD9rYu82

Nearly half the policies reversals will likely target the Environmental Protection Agency, “on issues as varied as drinking water, dangerous chemicals and gas-mileage standards,” adds the Post.

“It’s just a huge day to get rid of this myopic, benighted administration and welcome in a new president who manifestly is committed to strong, meaningful action,” said Todd Stern, who was the lead U.S. negotiator in Paris told the Guardian. “Rejoining Paris is just the first step, but it’s a big first step.”

The issue of climate change is rightly restored to the priorities on the White House website, after Trump had previously purged any mention of it. It’s listed second, after the COVID-19 pandemic, where it states that “President Biden will take swift action to tackle the climate emergency. The Biden Administration will ensure we meet the demands of science, while empowering American workers and businesses to lead a clean energy revolution.”

The move to restore the U.S. to Paris was welcomed on Twitter:

It’s happening! By Executive Order: No Keystone XL, no drilling in the Arctic Refuge and we’re back in the Paris Climate Agreement! And it’s still Day One!!! pic.twitter.com/s5DIFa7yxK

Nice tweet Sen. Cruz! Quick question: do you also believe the Geneva Convention was about the views of the citizens of Geneva?

Asking for everyone who believes US Senators should be competent and not undermine our elections to incite insurrection against the United States https://t.co/mMf8iDo72G

“Paris was an international agreement signed by lots of countries, right? Not just by France? It’s to help the whole planet.”

You’re an embarrassment. Oh and a seditionist traitor. #ExpelTedCruzNow pic.twitter.com/dXON4h1w9q

Of course, rejoining Paris and scrapping KXL must only be the beginning. As my colleague David Turnbull has pointed out: “Under President Biden and Vice President Harris, the United States can become a true climate leader by launching a rapid and equitable phase-out of fossil fuel production in line with science and justice. We stand ready to work with them toward that end, starting with halting fossil fuel leasing on public lands and waters, rejecting dangerous pipelines, and ending fossil fuel subsidies.”