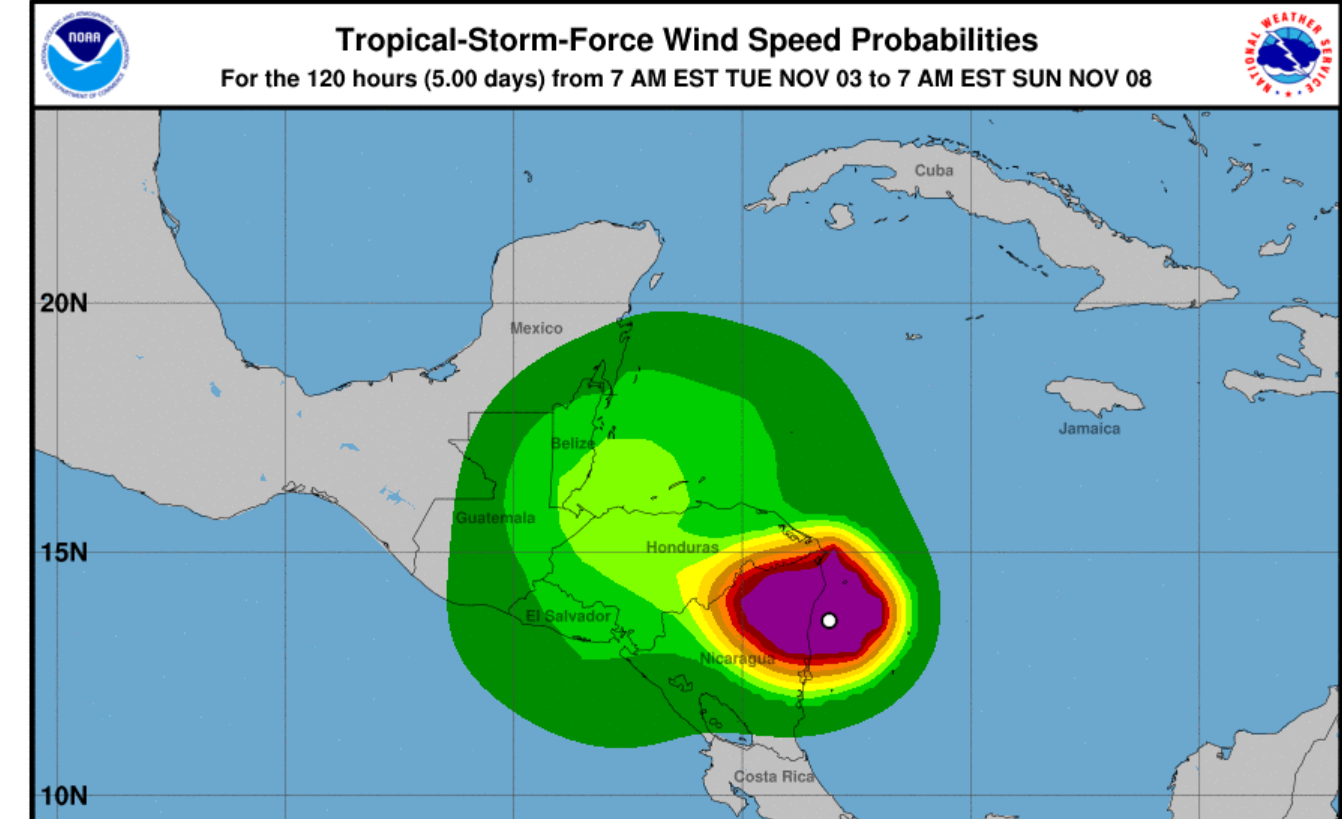 As the world’s attention is focussed on the outcome of the U.S. election, a disaster is unfolding live further south.

As I write, Hurricane Eta is battering the coast of Nicaragua, with experts warning it could lead to catastrophic winds, flooding, and loss of life.

The warning is stark: “Maximum sustained winds are near 145 mph (230 km/h) with higher gusts,” warned the Center, with predicted rainfall as much as 25 inches in many areas, reaching 35 inches in “isolated places.”

This level of rain was described by one expert as “jaw-dropping”.

While it is interesting #Eta has tied the 2005 named storm record, much more serious is the extreme rain event in Nicaragua and Honduras. A forecast of 30 inches of rain is jaw-dropping, and we could be looking at one of the worst flooding disasters there since Mitch. ? pic.twitter.com/zlFdKRvCMY

In addition, the forecasters at the National Hurricane Center also predict a “dangerous storm surge will raise water levels by as much as 14 to 21 feet above normal tide levels in areas of onshore winds along the coast of Nicaragua.”

Already the Category 4 storm has ripped off roofs, uprooted trees, taken out power supplies and caused severe flooding in one of the poorest regions of the country. It could even become a Category 5 storm.

According to CNN “the storm has the potential to be one of the worst flooding events Nicaragua has seen since Hurricane Mitch in 1998, which killed more than 10,000 people.”

As our world warms, the records keep being broken. Eta is not the only super storm this week, either. In the last few days, Typhoon Goni, seen as the most powerful storm of the year, has pummeled the Philippines, bringing with it “catastrophic” winds and rain, killing at least 20 people. Some 19 million people may be affected by the storm though.

The records keep tumbling. Eta is the 28th named storm and 12th hurricane in this current Atlantic hurricane season. As the New York Times reports, this ties 2005 for the record for the most storms in a year. “In 2005, as with this year, so many storms grew strong enough to be named that meteorologists had to resort to the Greek alphabet after exhausting the list of rotating names maintained by the World Meteorological Organization.”

It could even been one of the strongest hurricanes in history.

#Eta intensifies into one of the most intense November Atlantic basin hurricanes on record ahead of a potentially catastrophic strike in Central America.

As we keep saying, this is climate change in action. Scientists last month found that Atlantic Ocean was at its warmest it had been for 2,900 years.

So in the words of meteorologist, Eric Holthaus, it may be election day; but it is also a climate emergency.

I know it's Election Day, but there's a Category 4 hurricane making landfall in Nicaragua right now.

Hurricane Eta has sustained winds of 145mph and will bring about a meter (35-40 inches) of rainfall to Nicaragua & Honduras over the next 3 days.

We are in a climate emergency. pic.twitter.com/2zWmcpUKWf