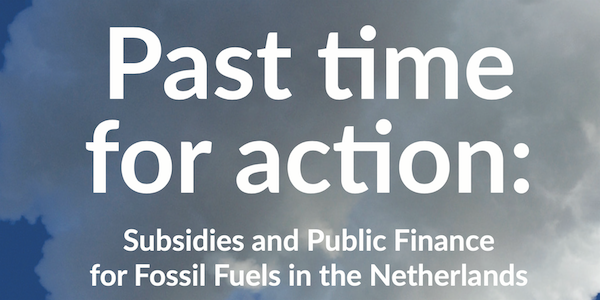 Amidst a climate crisis and global pandemic, it’s essential that countries develop public finance packages that phase out fossil fuel production and invest in a just, green transition toward renewable energy that benefits communities and industry workers. While the Netherlands has committed to redirect financial flows from fossil fuels to climate action, this report reveals that the Dutch Government continues to provide billions — at least €8.3 billion per year — in taxpayer backed support for the production and use of fossil fuels.

Now, for the first time, the Dutch Government has embarked on an effort to map the countries’ fossil fuel subsidies. This presents an important opportunity to turn longstanding commitments to end public support to fossil fuels into concrete action. We argue that the whole range of fossil fuels-supporting instruments should be included in the government’s efforts to align financial flows with climate goals, and we recommend the government to, at the national level:

At the international level, the Netherlands should: