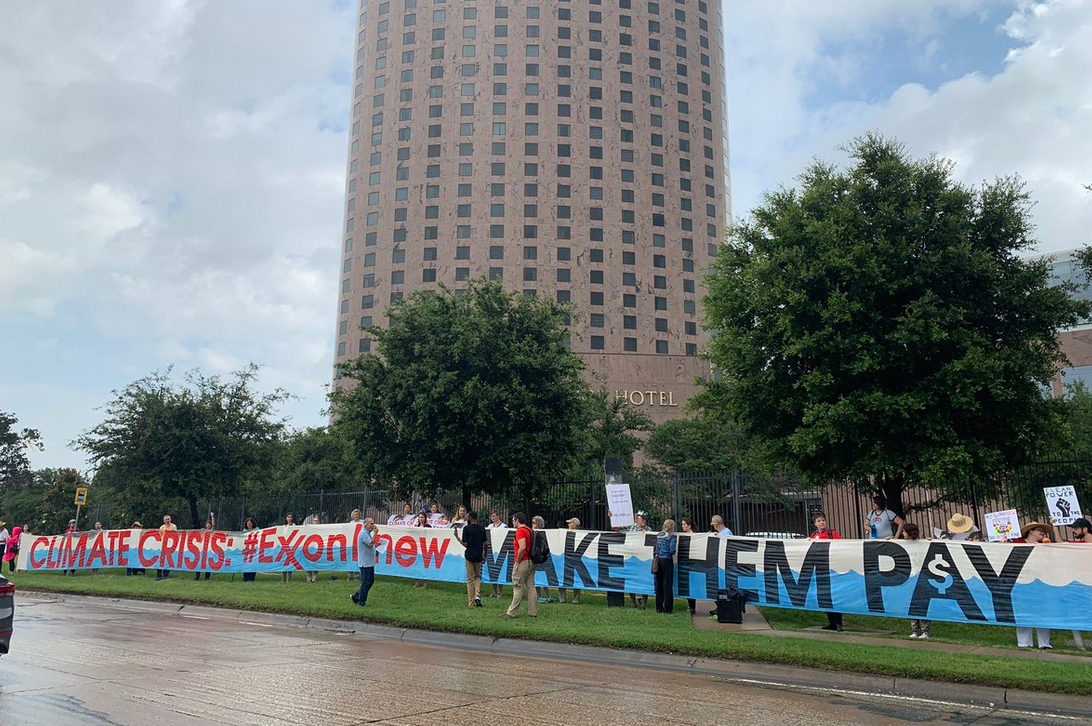 Yesterday, Big Oil behemoth Exxon held its Annual General Meeting, where the company and its shareholders once again fundamentally flunked the climate test.

For years, activists and progressive shareholders have been trying to get the company to act on climate and divest from oil and gas and transition swiftly into renewables.

They have pointed to the fact that Exxon has known for decades about climate change but still carried on drilling, whilst funding a huge network of right-wing groups to deny the science over climate.

But Exxon is an oil company to its black core. Other oil majors, such as Shell and BP, may be trying at least make the symbolic gesture of going carbon neutral by 2050, even though critics say the plans are flawed and not ambitious enough. But no so Exxon, it cannot be bothered to even do that.

The company is still blinded by a “drill, baby, drill” mentality that is hurtling us toward climate catastrophe. It is also losing its shareholders billions in investments as the company’s share price has plummeted due to COVID-19.

Exxon still has the most radical expansion plan of any oil major, despite a longstanding campaign of investor groups to bring the company in line with climate goals.

And that campaign intensified in the run up to yesterday’s AGM, when 160 climate, human rights, faith, and indigenous groups released what they called the Finance Climate Challenge.

The Challenge establishes a clear “climate-safe” boundary for any financing to the fossil fuel industry. It outlines simply how companies such as Exxon should only be eligible for investment if they commit to stop expansion of fossil fuels and release a detailed plan for a phase out.

One of the organizations signing on was Oil Change International (OCI). Hannah McKinnon, the Energy Transitions and Futures Program Director from OCI, said: “Maintaining a safe climate requires an ambitious just transition away from fossil fuel production starting now.” McKinnon added that “New production is not Paris-compatible and investors should plan a fast exit from any company that says otherwise.”

The disinvestment campaign has been joined by BlackRock, the world’s largest fund manager, often seen as a climate villain itself, which is one of the company’s largest shareholders. The investment company, which owns about 5 per cent of Exxon, lodged multiple votes against the oil giant over the oil company’s failure to make progress on its climate change targets.

BlackRock also voted in favor of a shareholder motion that proposes splitting the role of chief executive and chairman, something campaigners have been calling for decades trying to make the oil company more accountable for its disastrous climate policy.

However, according to Reuters under CEO Darren Woods, the company “blocked six climate resolutions from this year’s ballot.” Moreover, only a third of shareholders backed the proposal to split the CEO and Chairman.

This means that Exxon, which has been bruised, battered, and bloodied by a catastrophic collapse in the oil price, and is hemorrhaging money, wants us all to drive over a climate cliff too. It is reckless corporate behavior, which the executives must know will cost lives.

Indeed with a timing that is deeply ironic, the morning of the AGM, the UK Met Office’s Hadley Centre, one of the leading climate research institutes in the world, concluded that the “human fingerprint on the climate is now unmistakable” after 30 years of tracking the impact of humans on our changing climate.

Peter Stott, a Professor and expert on climate attribution science at the Hadley Centre, told the Guardian: “The climate now is completely different from what we had 30 years ago. It is completely outside the bounds of possibility in natural variation.”

He added “Reality has proven that what we were saying 20 to 30 years ago was right. As scientists, that is vindication… The worry is that we are now taking risks globally that we don’t fully understand… there will be no winners of climate change if we continue.”

And more than most it is Exxon’s dirty fingerprints all over our climate catastrophe. By the time the Hadley Centre was set up in 1990, Exxon knew that its emissions were causing climate change. It could have acted. But it did not. Instead it did the opposite and funded decades of denial. By doing so its finger have slowly tightened around our collective necks. It is time to break their dangerous grip before it is too late.