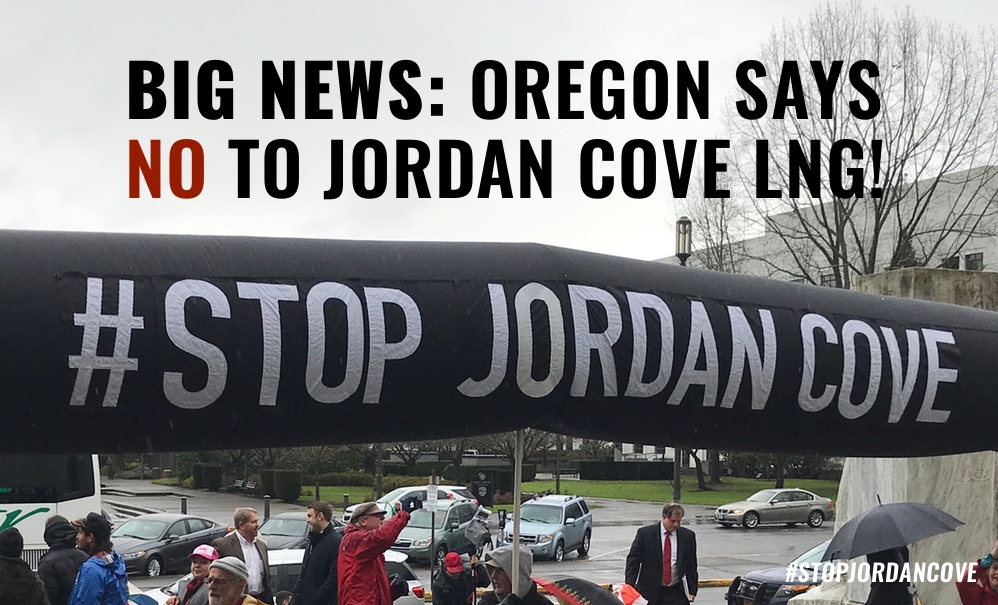 Monday, May 6 was a big day in Oregon in the fight against fossil fuels. In a big win for water and our climate, the Oregon Department of Environmental Quality (DEQ) delivered a potentially fatal blow to the Jordan Cove LNG project and the Pacific Connector fracked gas pipeline. 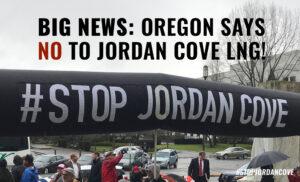 The Oregon DEQ announced that they had denied the Clean Water Act Section 401 permit for the dangerous and dirty project. Jordan Cove LNG cannot be built without this permit, since it is required in order for the U.S. Army Corps of Engineers to move forward.

And, it’s exactly the permitting authority that President Trump is hoping to wrestle away from states through last month’s executive orders.

This momentous decision from the DEQ follows a record-breaking public comment period that closed last August in which 42,000 people submitted comments, including thousands of Oil Change International supporters. Oregonians raised concerns about the impact the Jordan Cove LNG project would have on fishing, recreation, public drinking water, the economy of southern Oregon – and our climate.

The Jordan Cove project has faced fierce opposition for more than a decade by a grassroots coalition of impacted landowners, tribal members, anglers, small business owners, health professionals, and many more Oregonians and Northern Californians. This decision is a big win for all of those who have been fighting this dirty pipeline.

“Oregon’s decision shows that when we come together and speak out, we can win,” said Hannah Sohl, Director of Rogue Climate, one of the organizations involved in the broad coalition opposing the LNG project. “For years, a record number of Oregonians have urged Gov. Brown and Oregon agencies to put the public interest over the special interests of Canadian fossil fuel corporation Pembina. It is great to see Oregon DEQ do just that. Oregon should be focused on creating good-paying jobs in renewable energy, not on new fossil fuel projects that hurt us all.”

Analysis we at Oil Change International released in January 2018 showed that the greenhouse gases this project would be responsible for would be equivalent to over 15 times the 2016 emissions from Oregon’s only remaining coal plant, the Boardman coal plant, which is scheduled to close in 2020 because of climate and air pollution concerns. If built, Jordan Cove would be Oregon’s top carbon polluter.

Simply put, Jordan Cove would be a climate disaster.

The fight is not yet over. President Trump signed two executive orders in April that are aimed at ramming through the approval of more oil and gas pipeline projects across the country. In particular, one of the orders tries to take an axe to the Clean Water Act, removing the critical ability for states to protect their water by stopping fossil fuel projects. While this decision is a big win, we have to keep an eye on what could come next.

The latest? There’s still a chance the Jordan Cove project could get built. Last month, the Federal Energy Regulatory Commission (FERC) opened a public comment period on the Jordan Cove project – as the project also requires a federal permit before construction can begin. If FERC approves the federal permit, the future of Jordan Cove will depend on the state’s legal authority to reject infrastructure projects within their own borders – a move that Trump is actively trying to gut with his recent executive orders.

FERC has with few exceptions been a rubber stamp for fossil fuel projects. But here’s the thing: the Jordan Cove project has actually one of the few fossil fuel projects it has rejected in recent years. In fact, FERC rejected the project on two previous occasions. So, with enough public pressure there’s a chance they could do so again.

Join the Oil Change International email list today to
get involved in this campaign and others.