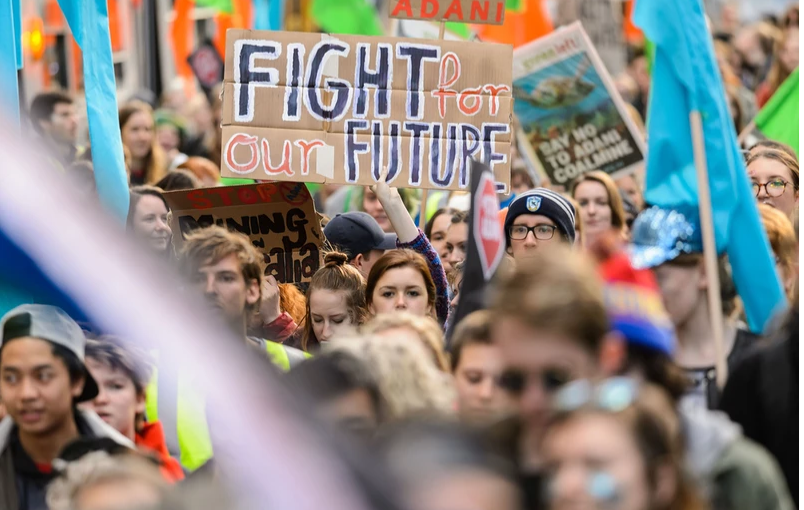 Tomorrow, in some hundred countries, in over one thousand cities, young people from around the world will walk out of their schools and colleges in the tens of thousands and join the first ever global School Strike for Climate.

They will be demanding greater action and urgency from their elected leaders. It could be one of the biggest protests on climate change. Ever. In the U.S., the students will join a nationwide school strike for the first time, too.

And no wonder. Climate change is here. It is already wreaking havoc with increasing floods and droughts and sea level rise. Yet we carry on drilling and burning – and the pace of change of the energy revolution away from fossil fuels, although happening, is still painfully slow.

Meanwhile, the science is downright scary. But our collective leaders are failing to respond to the science demanding urgent action, and failing to display the real climate leadership that we so desperately need. Or, even worse, they are active climate deniers, like the most damaging denier of them all, Donald Trump.

So it is no wonder that young people are angry at the failure of their parents and grandparents to act, to quote sixteen year old Greta Thunberg, as if the house is on fire.

For many of us who have been writing on climate change for decades, exposing the lies of hypocrisy and the flawed science of the oil industry and its denial network, the last few years have been especially tough. With a denier in the White House, and Trump’s unashamedly pro-coal, pro-oil climate-extinction agenda, these have been dark days.

There have been moments of sunshine in the darkness, though, and Friday will be a huge beaming light of hope, that has the potential to change the climate debate once and for all.

For the next generation will not take no for an answer, they will not accept more weasel words, hollow excuses or empty promises. They will speak truth to power. And demand action. And demand it now.

And for that we have to thank every person who strikes on Friday. But particularly we have Greta Thunberg to thank, who has inspired a global protest movement by striking outside the Swedish Parliament in August last year. And she has carried on striking every Friday since, in between speaking at the UN climate change conference and World Economic Forum, amongst others.

And although Greta started her protest alone, she is not alone anymore. Today, it was revealed she has been nominated for the Nobel Peace Prize. Norwegian Socialist MP, Freddy André Øvstegård said: “We have proposed Greta Thunberg because if we do nothing to halt climate change it will be the cause of wars, conflict and refugees. Greta Thunberg has launched a mass movement which I see as a major contribution to peace.”

So although she struggled to initially get her voice heard, Thunberg has launched a global mass movement that grows by the day. Her original skolstrejk för klimatet (school strike for climate) banner has been translated into numerous languages. Every Friday, thousands of school children now skip school and take to the streets. They unite under the hashtag #FridaysforFuture. All thanks to Greta.

Their demands are clear. Earlier this month, the global coordination group for the climate strikes outlined, in a letter to the Guardian, how they were speaking up for the “voiceless future of humanity”. In the letter they stated:

We, the young, are deeply concerned about our future. Humanity is currently causing the sixth mass extinction of species and the global climate system is at the brink of a catastrophic crisis. Its devastating impacts are already felt by millions of people around the globe. Yet we are far from reaching the goals of the Paris agreement.

We will no longer accept this injustice. We demand justice for all past, current and future victims of the climate crisis, and so we are rising up. Thousands of us have taken to the streets in the past weeks all around the world. Now we will make our voices heard. On 15 March, we will protest on every continent.

We finally need to treat the climate crisis as a crisis. It is the biggest threat in human history and we will not accept the world’s decision-makers’ inaction that threatens our entire civilisation. We will not accept a life in fear and devastation. We have the right to live our dreams and hopes. Climate change is already happening. People did die, are dying and will die because of it, but we can and will stop this madness.

We, the young, have started to move. We are going to change the fate of humanity, whether you like it or not. United we will rise until we see climate justice. We demand the world’s decision-makers take responsibility and solve this crisis.

The kids are gaining support. Last week, 100 US-based climate scientists released a letter in support of the strikers stating: “They need our support, but more than that, they need all of us to act. Their future depends on it; and so does ours.”

It is truly inspiring to see the age of many of the activists. Thunberg is sixteen.  As National Geographic points out: “The organizing effort in the U.S. rests on the shoulders of three young women: 13-year old Alexandria Villasenor of New York, 12-year old Haven Coleman of Denver, and 16-year old Isra Hirsi of Minneapolis. In just a few months, they’ve leapt headfirst into the world of climate activism—and have helped push climate change to the forefront of the national conversation.”

Alexandria says: “When I first became aware of climate change I felt hopeless. Now, I feel so much more powerful.”

Earlier in the week, the Guardian ran an article about Greta: “The girl who once slipped into despair” about climate change “is now a beacon of hope”.

Greta told the paper that Friday’s protest: “It’s going to be very, very big internationally, with hundreds of thousands of children going to strike from school to say that we aren’t going to accept this any more. I think we are only seeing the beginning. I think that change is on the horizon and the people will stand up for their future.”

So to Greta and anyone striking on Friday: Thank you. You are true warriors of the rainbow.