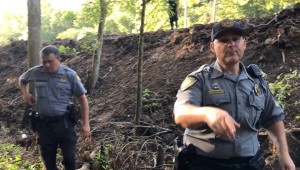 Eight water protectors now face up to five years behind bars due to a new law targeting pipeline opponents. They were arrested and charged with interfering with “critical infrastructure” — in this case the Bayou Bridge Pipeline being built by Energy Transfer Partners (ETP) through the ancient cypress forests within the Atchafalaya Basin.

The circumstances of the arrests show the degree to which pipeline companies have been able to bend the legal system to their will in the wake of the thousands-strong Dakota Access pipeline resistance in 2016 and 2017.

Here’s how they did it:

So to recap, ETP hired local police to violently clear a path for its pipeline through private property despite lacking clear legal authority and then jailed its opponents thanks to a law crafted by its industry’s trade association and passed by paid-for politicians. Louisiana Justice!

Meanwhile Wall Street is salivating over the recently announced merger of ETP with its parent company ETE, an expensive gambit by CEO Kelsey Warren to minimize long-term taxes and maximize returns to investors made possible by expected revenues from Bayou Bridge, Dakota Access and other pipelines aimed at moving crude oil from fracking wells in the nation’s interior to lucrative markets abroad. That’s bad news for water protectors — following the merger, the new company is expected to be better positioned to expand oil pipeline development. But good news for the ETP’s financiers including Citi and Barclays, who stand to earn millions in fees as advisors on the $27 billion deal.