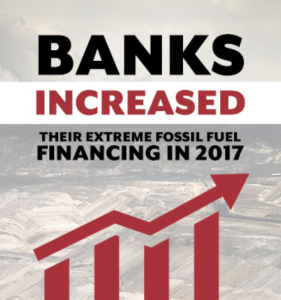 This ninth annual fossil fuel finance report card grades banks on their policy commitments regarding extreme fossil fuel financing and calculates their financing for these fuels from 2015 to 2017. The report also assesses the shortcomings of the Equator Principles for ensuring banks respect human rights, and Indigenous rights in particular.

The report assesses 36 private banks from Australia, Canada, China, Europe, Japan, and the United States, with policies from additional banks in these countries and Singapore included for comparison. As in previous editions of the report card, extreme fossil fuels refer to extreme oil (tar sands, Arctic, and ultra-deepwater oil), liquefied natural gas (LNG) export, coal mining, and coal power. The report card calculates how much banks have financed the top 30 companies in each of these subsectors (in addition to six tar sands pipeline companies) over the past three years. Lending and underwriting amounts are weighted based on the fossil fuel company’s activities in a given subsector.

It is environmentally, reputationally, and often financially risky for banks to back these fossil fuel projects and companies. More and more, the public is tying the impacts of fossil fuels to the financial institutions backing the sector. The authoring organizations of this report — BankTrack, Honor the Earth, Indigenous Environmental Network, Oil Change International, Rainforest Action Network, and the Sierra Club — demand that banks end financing for extreme fossil fuels, and all expansion of the fossil fuel industry, while ensuring that their financing does not contribute to human rights abuses.