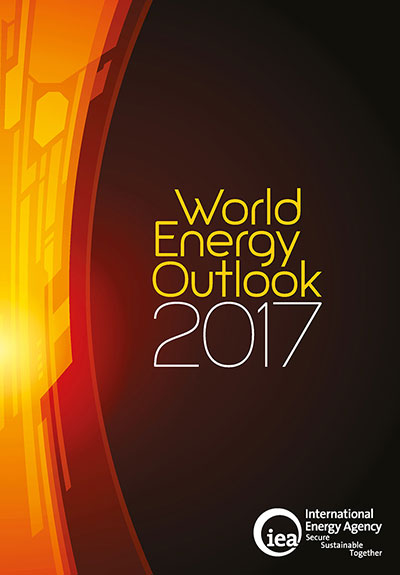 The International Energy Agency (IEA) likes to see itself as a bit of a climate champion. It has often warned, for example, that governments would need to do more to avoid dangerous climate change. In practice though, the IEA is more of a barrier than a helping hand, and the reason is its flagship publication, the World Energy Outlook. The latest instalment was published today.

Every year, the WEO maps out the future of energy, focused on a future where governments implement specific policies they have already planned, and no more: the so-called New Policies Scenario. Remarkably, the scenario falls short of even the formal emissions pledges countries have made (known as Nationally Determined Contributions – NDCs – under the Paris Agreements), Instead, the IEA assumes only that “many countries make progress towards the achievement of their NDCs”. At best it’s a very selective reading of which policies to include.

Governments and investors routinely look to the WEO when they make decisions, using it as their guide to the future. So power plants, pipelines and other infrastructure get built based on what the IEA says future demand will be. These then lock in oil, gas and coal use and production for 30 to 50 years: once the capital is sunk, alternative sources cannot compete. The result is the creation of the very future the IEA has described: a self-fulfilling prophecy.

The WEO also contains two other scenarios, one where governments do not implement their policy plans (the Current Policies Scenario) and another supposedly aligned with governments’ long-term goals on climate, energy access and air pollution (the Sustainable Development Scenario, SDS, on which more below).

But these two scenarios are presented as secondary. The vast majority of the WEO’s narrative, data projections and headlines focus on the New Policies Scenario, so unsurprisingly energy decision-makers take that as the prediction of future demand. The WEO is thus a very powerful tool in shaping our energy system.

The IEA is steering the energy system towards catastrophic levels of warming. In earlier editions of the WEO, the IEA estimated that the New Policies Scenario would set the world on course for 3.6°C of warming. These days, the IEA avoids making such estimates. But it falls short of countries emissions pledges, which together set the world on course for warming of between 2.8 and 3.3°C.

As if the Paris Agreement Never Happened

The IEA seems not to have noticed the Paris Agreement of 2015. Not only does its main New Policies Scenario fail to incorporate individual governments’ pledges, its secondary climate scenario does not reflect their collective long-term goals (although that is its stated purpose).

Until this year, that climate-goals scenario was the 450 Scenario, which the IEA defined as “consistent with a 50% chance of limiting global warming to 2°C”. When the Scenario was first published in 2009, it reflected the aim of limiting warming to 2°C (which was proposed by the UNFCCC in Copenhagen and formally adopted the following year at Cancún).

Since then, new scientific findings indicated that: even at 2°C, vulnerable countries in particular would face severe dangers. This is why the Paris Agreement includes more rigorous goals, of staying well below 2°C, and pursuing efforts to keep it to 1.5°C. 2°C is no longer seen as a goal, but as “an upper limit, a defense line that needs to be stringently defended”. Clearly, coin toss odds of avoiding severe dangers would not be a sensible way forward.

With that in mind, in March this year the IEA published a new scenario, funded by the German government, that would give a two-in-three chance of keeping warming below 2°C – still  an uncomfortably high level of risk, but arguably reflecting the bare minimum of what the Paris goals entail. We broadly welcomed the step in the right direction, though we had concerns about some of the details.

In today’s WEO, the 450 Scenario is replaced with a new Sustainable Development Scenario, which adds new goals of delivering universal energy access, and cutting air pollution. This was a clear opportunity to align emissions goals with the Paris Agreement. It’s an opportunity the IEA passed up.

Having faced criticisms from civil society, and some investors and policymakers, this year the IEA claimed that its new Sustainable Development Scenario was shaped by “an early peak in CO2 emissions and a subsequent rapid decline, consistent with the Paris Agreement”. It suggested that it was aligned with a temperature rise of  between 1.7 and 1.8°C.

Yet it achieved this feat without changing its emissions outlook. As the graph below shows, the claimed temperature target changed, but the emissions didn’t. 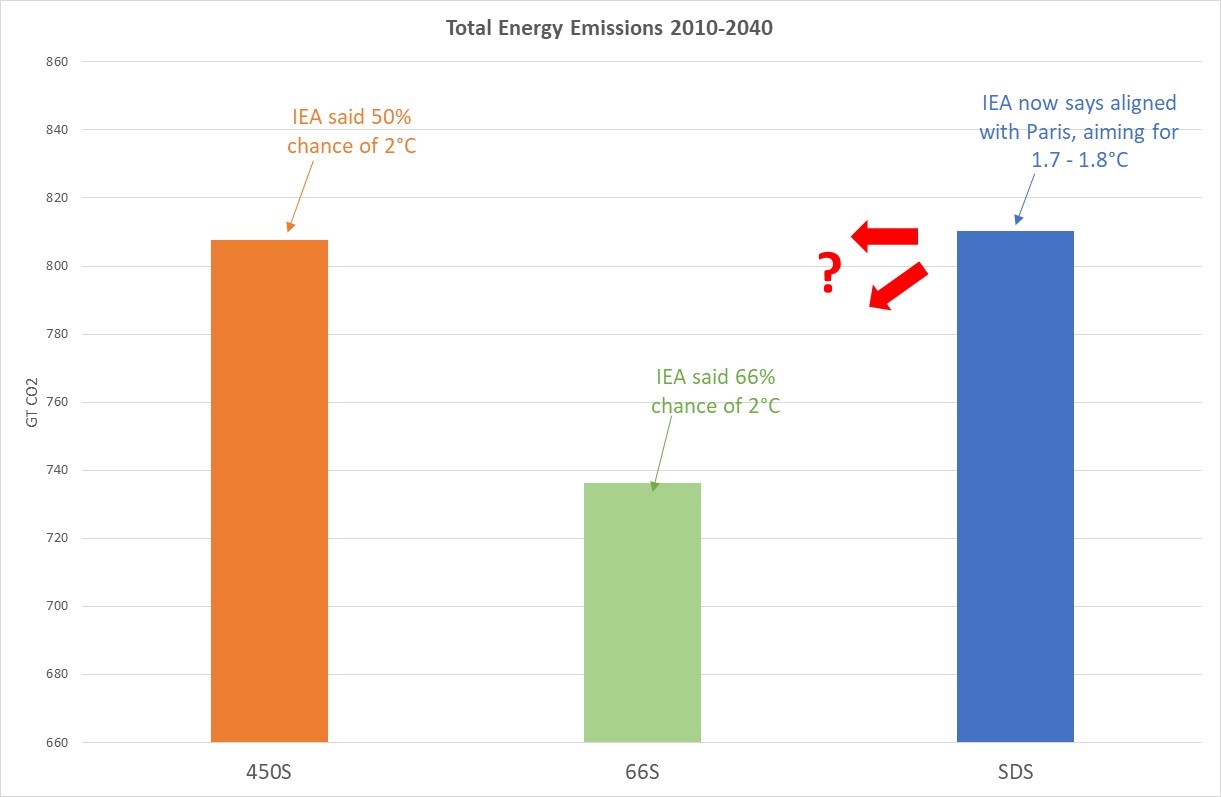 When Oil Change International spoke to IEA staff on this, they admitted that many of the 1.7 – 1.8°C scenarios depend on extensive, and likely unrealistic, amounts of negative emissions. They said – rightly – that the amount of warming depends also on what happens after 2040. And in theory it’s true that if emissions fell off a cliff after 2040, the Paris goals might be achieved. But the IEA cannot reasonably claim that the Sustainable Development Scenario is aligned with the Paris goals.

Why does all this matter? It means that we are getting a misleading picture of what climate action requires. It’s no wonder then that the Australian government has used the 450 Scenario to claim that coal mining is consistent with climate goals (p.151), or the British government to defend Arctic drilling (p.5).

Even decision-makers who consciously pick out the climate scenario as their guide are falling far short of the Paris goals. Governments commonly hold up the IEA’s climate scenario as a marker of ambition, and investors as a marker of risk. By understating the pace of transition that is needed, the Sustainable Development Scenario is downplaying ambition and amplifying risk.

Who Really Governs the IEA?

Why then does the IEA do this? It is supposed to be an advisory body to its 30 member countries, all of whom signed the Paris Agreement, committing to keep warming well below 2°C, and to pursue efforts to keep it to 1.5°C. The IEA ought to be showing them how with its climate scenario. It ought to be helping them do so by making climate the main focus guiding decision-makers.

The reason is that the IEA’s real masters appear to be the fossil fuel companies. Last week, when ministers of member governments held their two-yearly meeting, they were joined by the IEA’s Energy Business Council, made up of energy companies, 89% of which produce, consume, service, finance, or lobby for fossil fuels.

Thus the IEA spends much of its resources promoting fossil fuels, through its Clean Coal Centre, its calls for more investment in fossil infrastructure, and today its claim that fossil gas is a clean fuel that can be used during the energy transition.

On that latter point, the IEA dedicated an entire WEO  chapter to making an “environmental case for natural gas”. The centerpiece of the analysis is the idea that the leakage of methane can be reduced to acceptable levels at little to no cost to oil and gas producers. But here’s the trouble. The analysis is based on a projected increase in gas production and consumption that is so large, emissions targets would be vastly overshot even if all the coal plants in the world were shut down. In other words, to save that much methane would require producing more gas than is safe to burn. The numbers just don’t add up.

Last week, we released a short report that explains why the idea of fossil gas as a “bridge fuel” to the clean energy transition is nonsense – even setting aside emissions from methane leakage.

Even the IEA data shows that implementing the leakage reductions it advocates for would reduce temperature rise by only 0.07°C, compared to its core pathway for more than 3°C. The most generous thing we can say then is that the IEA’s core solution is hopelessly inadequate, and that is precisely because it is a solution that costs nothing to the fossil fuel companies. At best, the IEA is stuck in the outdated approach of promoting marginal reductions compared to a theoretical business-as-usual scenario, rather than taking seriously the real limits to what can be extracted and burned safely.

Given the IEA’s closeness to the fossil fuel industry, perhaps it’s not surprising that its flagship publication serves more to shelter fossil fuels from climate action. This can’t continue. It is time for member governments to demand the IEA helps, not hinders, their efforts to avert dangerous climate change.