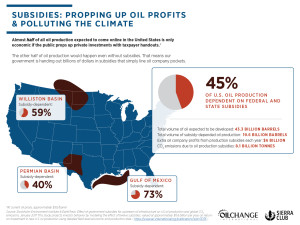 Almost half of all oil production expected to come online in the United States is only economic if the public props up private investments with taxpayer handouts.

The other half of oil production would happen even without subsidies. That means our government is handing out billions of dollars in subsidies that simply line oil company pockets.

This infographic compares the economic viability of oil production in discovered but undeveloped U.S. fields with and without subsidies. It shows that at current prices, almost half of all oil production is dependent on federal and state subsidies.

That equates to 19.6 billion barrels of artificially economic oil that, once burned, would emit 8.1 billion tonnes of CO2. That’s about 1% of the world’s remaining carbon budget, or equal to 100 coal-fired power plants operating for 23 years.