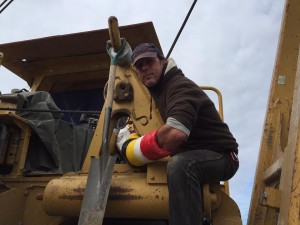 Despite worldwide protests yesterday, Kelcy Warren, the billionaire owner of the company building the Dakota Access pipeline, has defiantly vowed to “complete construction” of what has rapidly become the most highly controversial fossil fuel project in the world.

In a memo issued to employees and sent to the media Warren,  who is worth $7 billion, wrote that his company, Energy Transfer Partners, remained “committed to completing construction and safely operating the Dakota Access Pipeline within the confines of the law.”

The pipeline tycoon outlined how the company intends “to meet with officials in Washington to understand their position and reiterate our commitment to bring the Dakota Access Pipeline into operation.”

In a rebuke to protestors and the Obama Administration which demanded the company voluntarily stop construction last Friday, Warren argued that “The right of way for the entire pipeline has been obtained. All four states the pipeline traverses – North Dakota, South Dakota, Illinois, and Iowa –  have issued favorable certificates, permits and approvals for construction”.

Warren is a man who had made a fortune shipping crude. Bloomberg Magazine last year reported how: “His company does no divining or drilling. Rather, it takes the stuff others pull from underground and moves it from one place to another, chilling, boiling, pressurizing, and processing it until it’s worth more than when it burst from the wellhead.”

And Warren is not going to back down any time soon.

In a defiant message to the thousands of First Nations camped at Standing Rock, and their millions of supporters worldwide, he said: “neither the land abutting nor Lake Oahe itself is subject to Native American control or ownership.”

He widely dismissed their concerns arguing that the North Dakota pipeline follows the existing route of a natural gas pipeline in that area and that “Multiple archaeological studies conducted with state historic preservation offices found no sacred items along the route.”

He added that “Concerns about the pipeline’s impact on the local water supply are unfounded.”

The memo is likely to inflame already high tensions.

Hours after it was released, two water protectors locked themselves to construction in North Dakota, bringing construction the pipeline to a stand-still (see photo).

The message on Facebook from the Sacred Stone camp was defiant: “Two allies have locked down and halted construction on the Dakota Access pipeline 1.5 hours west of camp ..We won’t stop until they stop and being an ally means taking action.”

According to the Red Warrior Camp “one of the individuals was locked onto the machine for nearly 7 hours. Trained medics, media, legal observers and police liaisons were on hand to offer support and were also arrested.”

At the end of the day some 22 water protectors had been arrested. The arrests included two more journalists. Eye witness accounts said local Police had started carrying assault rifles.

Dave Archambault II, the head of the Standing Rock Sioux tribe, dismissed Energy Transfer’s argument that they had been adequately consulted saying that Energy Transfer Partners’ “consultations” with his tribe were one-sided and the company “met with us after their plans were already made”.

So it seems that Ene 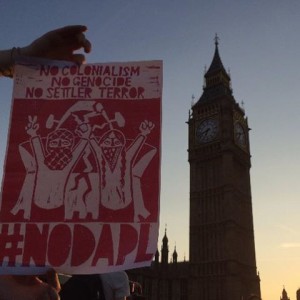 rgy Transfer Partners have tried to use the classic public relations trick whereby the company enters into dialogue with the opposition, but up not up for discussion is whether the project should go ahead but how it should.

Archambault added “Energy Transfer Partners has proven time and time again that the bottom line for them is money. The bottom line for the Standing Rock Sioux Tribe is and will always be protecting our lands, people, water and sacred sites from the devastation of this pipeline. Our fight isn’t over until there is permanent protection of our people and resources from the pipeline.”

And yesterday the fight spread across the US and internationally, including in London (see picture).

Another rally was in Washington, where Senator Bernie Sanders joined hundreds of activists, including from the Standing Rock Sioux Tribe and other tribal nations.  He said the pipeline must be stopped “once and for all”.

“Stop the pipeline, respect Native American rights and let us move forward to transform our energy systems away from fossil fuels,” said Sanders.